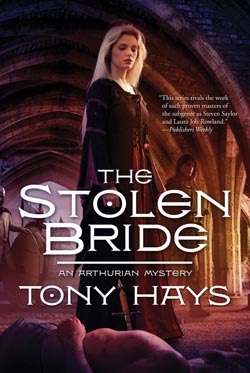 I grew up on the Arthurian stories. Loved everything having to do with Arthur, Excalibur, the knights of the round table…you name it, I read it. And later I studied it. And read more, much of it in obscure languages like Latin and Old French. But the more I read of the original tales, the less I liked reading modern interpretations until eventually I began to automatically avoid anything having to do with Arthur.

So it was with some reluctance that I picked up Tony Hays’ The Stolen Bride. I’d heard the series was excellent, so I plunged on in…and was very pleasantly surprised!

It’s a difficult thing to write about a history that everyone feels as if they know to their bones, but that never actually happened. Depending on which tales of Arthur you read as a child, you might have a very different idea of what that period looked, sounded…and smelled…like than someone else. Which leaves Hays in a bit of a quandary. He solves it by grounding you almost immediately in his picture of history, which is a Britain just after Roman abandonment, what “would have been” in the age of Geoffrey of Monmouth’s Arthur.

And now I faced that young lord again, only this time there was gray creeping into his hair and beard. And now he was the Rigotamos, the High King of All Britannia, a title more fantasy than reality, as we were more a collection of feuding tribes than a united nation. But Arthur was trying, and much good could be said for that fact alone. We were tied by more than that, though. My cousin, Guinevere, was Arthur’s consort.

No king in ermine-tipped robes here. And his “knights” are not those imagined by the French poets centuries later, either. Instead, they are “councilors,” and among them is our narrator, Malgwyn, a man who notices much and is therefore invaluable in solving mysteries despite the fact that he lost an arm in battle and is haunted not only by that loss but also by that of his first wife at the hands of Saxon raiders.

There are high-stakes politics at work in this book, as one of the councilors has discovered gold on his land.

“As to the issue of the gold and agaphite, I have decided to convey all rights to the consilium, provided that they take responsibility for the mining.”

Bedevere and I exchanged swift glances. Doged was indeed clever. By giving the rights to the consilium, he essentially made them all business partners in the mining, and he eliminated the need for the other lords to contrive against him.

“Master Malgwyn,” Doged continued. “I know that you are a scribe, and I hoped that you would prepare a document to that effect. I wish to present this gift to the Rigotamos immediately upon his arrival.”

I nodded. “It will be my pleasure, my lord.”

But Doged is killed before he can sign the document. Which came as a surprise to me…I hadn’t expected a murder, given the title. But I will let you discover the meaning of the “stolen bride” for yourself.

Malgwyn is a difficult character and he’s put in a difficult spot in this book. There are a huge number of suspects at Doged’s court, from his young wife and rebellious sons to Mordred and even Saxons. And if there’s anyone Malgwyn hates more than Mordred, it’s Saxons.

And then yet a new party sent my hand reaching for my sword. Saxons. Beside me, Bedevere swore. We knew they were here under a flag of truce and hence we were forbidden to harm them. This was fortunate. For were I to have my way, I would personally have cut each and every Saxon throat I could find, and bathed in their blood. I tried to push those thoughts away, and much of the time I was successful. But the sight of even one greasy topknot sent the bile boiling into my throat.

Yeah, it’s a challenging situation. And it keeps you wondering right to the end who killed Doged and why and how Malgwyn will figure it all out.  So now I am off to pick up the other books in the series and see what I’ve been missing!