March 15, 2021
From the author of The New Husband, read a new excerpt from D. J. Palmer's The Perfect Daughter, a thriller that explores the truth or lies behind a teenage girl's multiple personality disorder.

BONUS: find out how you can win one of three advance reader copies of The Perfect Daughter and a branded coffee mug! 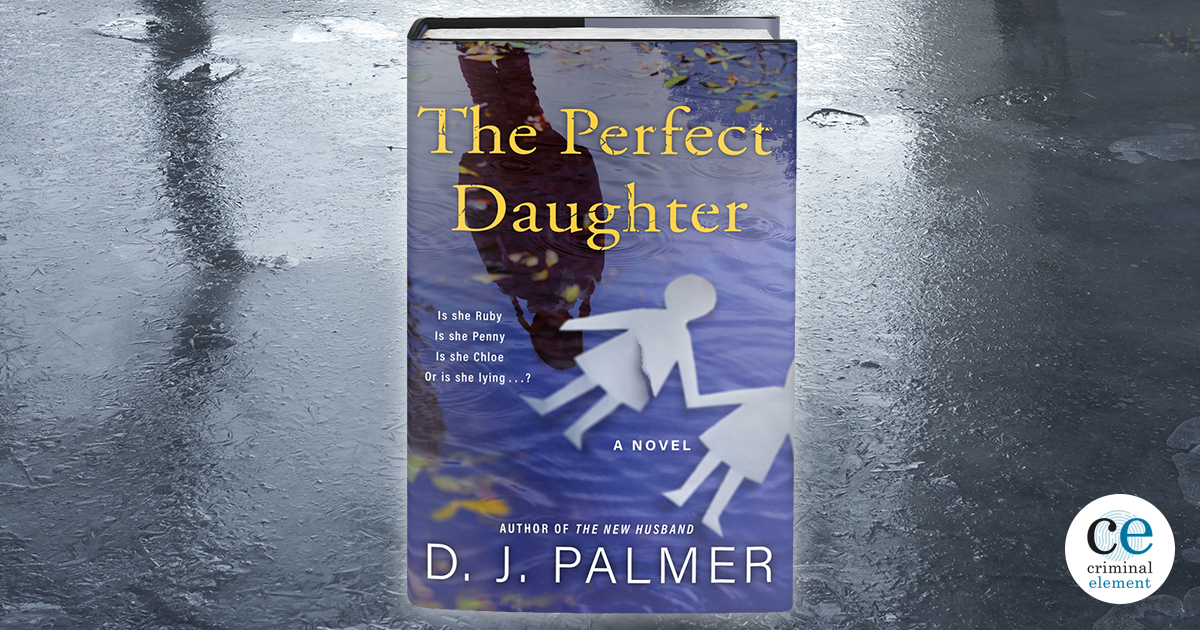 At thirty minutes past eight o’clock, red and blue strobe lights lit up the sky outside Grace Francone’s modest Cape house with the frenzy of a fireworks display. A quick check out the window revealed two cars parked in her driveway, one a sedan, a single twirling red light mounted to its dashboard, and the other a black-and-white from the Lynn Police Department, lights also flashing.

Not more than two hours ago, she had returned home from a run to find her sixteen-year-old daughter, Penny, gone. Since she was a teenager, it was no great surprise her daughter had left the house without a text or a note to say where she was going. Out of habit Grace had checked the garage to find the burgundy Chevy Caprice, still registered to Penny’s deceased father, was also missing. Grace assumed Penny, who had the car keys and her license, had taken it. The house rule was to always ask permission before taking the car, and to give a destination and return time. The lack of any such communication put Penny’s driving privileges in jeopardy.

Naturally, Grace had texted Penny to check on her whereabouts. When she didn’t get a reply, she figured Penny was trying to avoid a conflict. Now, Grace had a different thought.

The unexpected arrival of the police filled her with a dark vision of a twisted knot of steel, parts of it resembling what was once that Chevy Caprice. She imagined the vehicle had veered off a road somewhere, and now lay crumpled like a balled-up piece of paper. Penny was either still pinned in the wreckage, rushed to a hospital . . . or worse, much worse.

Grace opened the front door before the police had time to exit their vehicles. Outside, a crackle of indecipherable radio chatter momentarily drowned out the night-calling insects. Even though she lived a mile from the ocean, the air carried a tinge of salt, that special seawater smell that normally she found so rejuvenating. Not tonight.

Of the two men who strode up her walkway, only one was dressed in a police uniform. The other gentleman, a heavyset fellow, sported a thick mustache, and wore a dark suit to match his hair. This one greeted Grace with an inscrutable expression, which set her somewhat at ease. At least his eyes didn’t carry the weighty look of someone about to crush her soul.

He had a deep, gravelly voice, good for coaching or getting hardened people to follow his orders. The best Grace could manage with her throat so dry was a quick nod.

“I’m Detective Jay Allio from the Lynn Police Department, and this is Sergeant Brent Adams. Is your daughter Penny Francone?”

“Yes,” Grace said, shifting her weight from one foot to the other, feeling her anxiousness fire back up.

“We came here to tell you that we’ve arrested her. She’s at the Lynn Police Station right now.”

Grace’s field of vision blurred momentarily. “Arrested? For what?”

“We believe she killed a woman,” Allio said, showing no emotion in his voice or face.

Grace used one hand to grip the doorframe while the other went to her chest, where she could feel her heart beating way too fast.

“No, it’s not that,” said Allio. “No accident. And Penny is uninjured. We believe it was a homicide.”

The matter-of-fact way he shared this information made it hard for Grace to process his words.

“We believe Penny committed a homicide this evening.”

“A . . . murder,” Grace stammered. “You think my daughter murdered someone?”

Her words came out with a sharp edge as her grip on the doorframe tightened. She felt like she’d slipped out of her own body and was observing these events from some higher vantage point. Part of her wanted to slam the door on the detective’s face, imagining that doing so might make it all untrue, but she resisted the irrational urge.

“When is the last time you saw your daughter?” Allio asked. His delivery seemed dispassionate, but Grace reminded herself that his job was to remain even-keeled when delivering seismic news. The other officer continued to hang back, giving Grace the distinct impression he was there simply to assist should she become unhinged or hysterical, either of which were real possibilities.

“A couple hours ago . . . I’d gone for a run, and when I came back, she was gone,” Grace said, fighting for every bit of composure she could muster. “When . . . when was she arrested?”

“She’s been at the station a half hour or so.”

A sharp twinge hit the back of Grace’s neck, which she tried rubbing away with her hand.

“So have you talked to her? Asked her what happened?”

“We checked her license. She’s a minor. It’s our policy that we talk to you first.”

Grace thought: And I need to talk to a lawyer.

“When we arrested her, she was covered in blood—it was all over her body, in her hair—so when you come to the station, you should bring a change of clothes.”

“She’s still in bloody clothes? You left her like that?”

“It’s evidence,” Allio said as explanation. “It takes time for us to collect the samples we need before we can let her get cleaned up.”

“I need to get there—I need to leave right now.” Grace felt the ground tilt beneath her feet.

“I understand,” Allio said, continuing to radiate calm. “You need to take this a step at a time, okay? I have some more questions I’d like to ask.”

“Blood,” Grace whispered. “Oh my God. And you said she wasn’t hurt?”

“No, there are no visible wounds on Penny. But the victim was found deceased at the scene, and we believe it’s the victim’s blood on your daughter’s body.”

Grace got the impression the detective was holding something back.

“She’s calling herself Eve, but that’s not the name on her license.”

“She said she doesn’t remember anything that happened before we showed up. We think maybe she’s in shock, but we’re not sure,” Allio went on. “Is Eve a nickname?”

Grace paused, deciding how to answer. “It’s more complicated than that,” she offered sparingly, thinking that oversharing wouldn’t do Penny any good. Thankfully, Allio decided to let it go.

“And you had no idea where Penny was headed when she left the house?”

“Had she done that before?” Allio asked. “Taken the car and not told you where she was going?”

“No, it’s against the rules,” Grace said again, thinking Less is more. “She likes to take walks. I thought maybe she took the car to go to the beach or something and forgot to tell me.”

“Any reason she might have gone to Lynn? Does she have a friend there?”

Grace shook her head, reminding herself that Allio wasn’t on her side. He had her daughter in custody and his agenda was different than hers.

“Have you noticed any changes in her behavior lately? Have you seen any anger, withdrawal, anything different?”

Grace mulled it over before answering. She was barely holding on. A slight breeze could totter her off of some invisible edge into full-blown hysterics. For a moment she worried she was going to get sick.

“No,” Grace finally managed. “Everything has been fine. I think I need a lawyer.”

Allio’s eyes danced across her face in an unsettling way, as if he knew much more than he was letting on.

“Let me ask you one last question, if I may. I’m sure you want to get down to the station. Do you know a woman named Rachel Boyd?”

For Grace, it felt as though time itself had come to a stop. Her body went numb, mind a blank.

“Yes, Rachel has been murdered. Is there a connection between Penny and Ms. Boyd?” Allio asked.

Grace nodded insensibly. Her legs were shaking, barely able to hold her upright. “Yes,” she said, her thoughts fading as her vision grew dark. “Rachel Boyd is my daughter’s birth mother.”

Excerpted from The Perfect Daughter. Copyright © 2021 by D. J. Palmer. 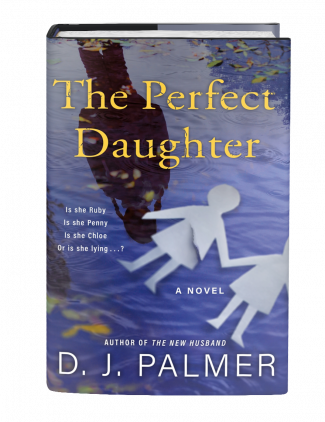 Sign in and comment on this post for a chance to win an Advance Reader Copy of The Perfect Daughter by D. J. Palmer, and a branded coffee mug!

The Perfect Daughter Comment Sweepstakes: NO PURCHASE NECESSARY TO ENTER OR WIN.  A purchase does not improve your chances of winning.  Sweepstakes open to legal residents of 50 United States, D.C., and Canada (excluding Quebec), who are 18 years or older as of the date of entry.  To enter, complete the “Post a Comment” entry at https://www.criminalelement.com/the-perfect-daughter-by-d-j-palmer-featured-excerpt/ beginning at 3:00 p.m. Eastern Time (ET) March 15, 2021. Sweepstakes ends at 2:59 p.m. ET March 29, 2021. Void outside the United States and Canada and where prohibited by law. Please see full details and official rules here. Sponsor: Macmillan, 120 Broadway, New York, NY 10271.