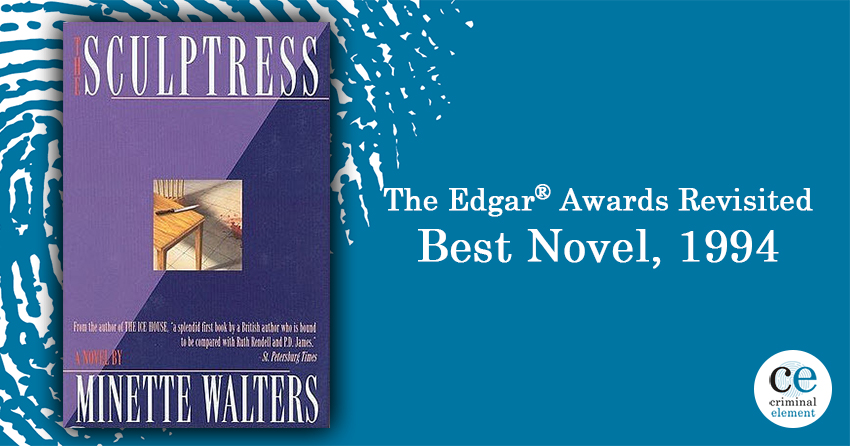 The Sculptress is the first book I’ve read by Minette Walters, but it certainly won’t be the last. I was surprised to learn that it’s only the second book she’d written, quickly following on the tail of her 1992 debut novel, The Ice House. Walters’ writing draws you in at once. It’s clear when you read The Sculptress that Minette is writing in her wheelhouse, and it’s no wonder that this novel took the Edgar Award for Best Novel.

After watching the latest season of Mindhunter, I was primed and ready for yet another story of grisly murder as told by a psychopath, which is how The Sculptress is framed. The story opens with journalist Rosalind “Roz” Leigh visiting Olive Martin in prison. A morbidly obese woman known inside the walls of the prison as “the sculptress,” Olive is serving a life sentence for the murder of her mother and sister. Olive confessed to killing them with a rolling pin and dismembering them with a blunt axe. (The blunt axe is referred to multiple times, but beyond the descriptions of the murders towards the beginning, the book does not contain gratuitous descriptions of graphic violence.) When she isn’t murdering/butchering her family members in cold blood, Olive enjoys sculpting figures out of clay in her prison cell, hence the epithet, “sculptress.” You can see a brief glimpse of Olive from the trailer of this 1996 adaptation produced by the BBC:

Olive’s case appeared to have been open-and-shut, and Roz is at first hesitant to use it as the source material for her new book. Roz has journalistic integrity and would not write a story of sensational violence because it would only serve to put a spotlight on an evil person. But she does listen (partly because of her agent’s insistence) as Olive relays the details of the crime and her subsequent arrest.

Olive phoned the police and asked that an officer come to her house in Dawlington, Southampton. On arrival, police officer Hal Hawksley finds Olive covered in blood. She leads him to the kitchen where her mother and sister have been murdered, decapitated, and dismembered. Olive apologizes to the officer, claiming she lost her temper. She says that she only began to dismember the bodies of her family members because she needed to move them out of the kitchen for fear that her father would be angry to find the scene when he came home from work.

Understandably, Roz is on the fence about using Olive’s story for a book despite pressure from her publisher to finish a book or risk being dropped. At first, the only thing that keeps Roz invested in the case is that Olive doesn’t appear to be a lunatic. From all appearances and after conversing, she actually seems…nice.

As Roz she learns more about how the case unfolded, she uncovers more interesting discrepancies that make her begin to question whether Olive actually committed the crimes she confessed to, which opens a new, more interesting perspective to pursue. Five other psychologists have deemed Olive to be “normal.” So the looming question is why would someone admit to a murder they did not commit? Moreover, why would they confess to killing their mother and sister?

Roz leaves Olive and begins hunting down any leads she can to learn more about a case that was closed almost as quickly as it was opened. Only now it’s been several years. Talking to former neighbors of the Martin family and a nun who taught Olive and her sister Amber in school validates Roz’s suspicions that something fishy is afoot. Everyone who knew Olive and her sister Amber said that Amber was the beautiful and delightful one and that Olive was odd and off-putting. But everyone noticed that Olive loved Amber more than anything else. No one would have believed beforehand that Olive could have killed her sister, except for the fact that Olive offered up a confession.

Minette Walters is talented at divulging key features about her characters in the context of the story in a very gratifying way, pulling you further into the narrative. For instance, when speaking with Olive, Roz says she is divorced without children, because she was “not the maternal type.” In fact, while it’s true that Roz is divorced, she and her husband did have a daughter. Alice, the daughter, died in a tragic accident, which eventually served to drive a wedge between husband and wife, effectively ending the marriage. Roz does share this painful chapter of her life with Hal Hawksley, the arresting officer in Olive’s case. Of course, as she continues to question Hal about his involvement in the Olive Martin case and hounds him about proper police procedure, a professional relationship quickly morphs into a romantic one.

Hal is a retired police officer, and spends his time (trying) to run a restaurant, the Poacher. Located in town, the Poacher almost never has any paying customers, with the exception of Roz who often will eat for free at Hal’s insisting. Strangely, when Roz first meets him, Hal is bruised and bleeding. As he and Roz talk more and try to resolve the now piling inconsistencies in the Olive Martin case, a new mystery begins to come to the forefront: someone is intentionally trying to sabotage Hal and his business. Minette clearly has a strong handle on her characters and plotting, because Hal’s presence easily could have been a B-story that existed for the purpose of giving Roz a love interest, but it does tie back into the overarching Olive Martin case and builds from there.

The Sculptress is engaging and thought-provoking even without the use of over-the-top, bloody violence (ahem, aside from the Chapter 1 double axe murder). Besides keeping you invested in the narrative with perfect pacing and strong cliffhanger chapter endings, Walters writes beautifully, often interspersing poignant insights amidst the plot. When Roz opens up to Hal about the tragic death of her daughter and cries, for instance, Hal, (ever the rough yet emotionally available gentleman), tells her she should not apologizes for weeping about her daughter.

What a terrible indictment of Western society it was, that a mother should be afraid to shed tears for her dead daughter in case she embarrassed someone.

Family is always at the core of the story. Roz wrestles with her own family trauma and tries to uncover secrets in Olive’s family that could have led to what she believes is a false confession from Olive. Family relationships are a great source of drama after all. But I most appreciated that the characters in The Sculptress are all motivated and their actions are all logical, even if we as the reader may not be able to see why right away. Walters slowly pulls us back to look at the greater picture, clearing up a lot of intentional confusion. The book doesn’t tie up every loose end which is OK. Roz’s relationship with her ex-husband is in no way wrapped up with a bow by the novel’s end, but the main mystery surrounding Olive Martin’s arrest and conviction is addressed clearly, and will surprise you with more than a few twists.

Minette Walters will remind you that truth isn’t always as clear cut as we would like it to be, so like Roz, it’s always best to keep asking questions.

Check back in next week as we review Mary Willis Walker’s The Red Scream, the 1995 Edgar Award winner of Best Novel.  See you then!