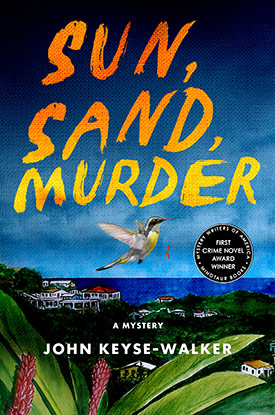 The last murder to take place on the isle of Anegada, located in the British Virgin Islands, happened in 1681 and involved pirates. So it’s no wonder that when biologist Paul Killiher is murdered—shot in the head—the small island’s Special Constable Teddy Creque finds himself in over his head. Creque stumbles hard enough through processing his first crime scene to be pulled off the investigation. The only thing the “real” police officers of the British Virgin Islands are willing to let Creque handle is contacting Killiher’s next-of-kin.

Creque, hoping to keep his job, follows instructions and works to find Killiher’s family. There’s only one snag: Killiher doesn’t seem to exist. The “biologist’s” passport is false, his license is false, and no one on the island or the American mainland seems to know who he is. To keep the case from going cold and to catch a murderer terrorizing his small island home, Creque decides to investigate despite strict orders from higher-up to do nothing.

Sun, Sand, and Murder by John Keyse-Walker is an original novel filled with lively characters and fascinating locations. Teddy Creque, our main character, adds an element of suspense in that he’s not entirely sure what he’s doing. Therefore, he could do anything. Readers familiar with police procedure may start yelling at the pages early: “Don’t do that!!” But the fact that Keyse-Walker is willing and able to have his main character make mistakes is refreshing. It allows the reader to follow along with his learning process, and there’s plenty Creque does understand…

Like his island home. Having grown up on Anegada (population: 200), Creque knows the topography. Anegada becomes a character in and of itself, filled with strange features like a hostile desert inland, luxurious houses, diving holes, and beautiful beaches—all with flavorful names like Cow Wreck Bay, the Settlement, Bone Bight, and Horseshoe Reef. Keyse-Walker does a lovely job creating a sense of place:

The Land Rover had a siren but I did not use it. I had never used it. The dozen or so vehicles on Anegada rarely encountered each other on the interior roads. The greater hazard on the road is feral cattle. Descendants of the survivors of a cattle boat sinking in the 1930s, the skeletal cows, bulls, and calves move like molasses, unfazed by horns, shouts or sirens. After maneuvering around a half dozen of the feeble beasts, I reached the lip of pavement marking the beginning of a quarter mile of concrete road and the outer boundary of Anegada’s only town, if it can be called that, The Settlement.

The Settlement is where I grew up and where most of Anegada’s two hundred souls live. There are no grocery stores, no pharmacies, no banks, and no fast-food restaurants there. Goats and chickens roam the sand lanes between small shacks baking in treeless yards marked by low limestone walls.

But, there’s more to Anegada than washboard roads. The characters that populate this small island are larger-than-life. Even Creque himself, who says, “Living in a simple place does not always make a simple life.” And how! Keyse-Walker presents Creque as a hard-working man who has four jobs: police constable, customs officer, tour guide, and a shift worker at the power plant. He’s also a family man with a wife and two kids. All of this makes him quite likeable and relatable.

Then, you meet his mistress, beautiful helicopter pilot Cat Wells. So, now we understand Creque is a cheater, which makes his motives more complex. How will he navigate his personal life, which is about to implode, right when his professional life is imploding?

Creque is well-placed among the complex locals. There’s Killiher, the murdered biologist who is not a biologist. There’s Belle, the proprietor of Cow Wreck Beach Bar and Grill. There’s Wendell George, the rich pirate treasure-hunter and his French Mistress, who speaks to no one.

The whites of De Rasta’s bloodshot eyes grew wide and he gave an emphatic shake of his dirty blond dreadlocks. “Mon, I-mon not go back to where dat dead mon be lie-ins. I-mon nah go deh ever again. Dat place fulla duppies.”

I suspected the Rastafarian ghosts, the “duppies” that De White Rasta had seen had more to do with his cannabis intake than his eyesight.

Turns out there’s a lot more to De White Rasta than meets the bloodshot eye. His real name is Anthony Wedderburn—the son of a member of the British House of Lords.

“Ghosts are as real as you and me, Teddy,” De White Rasta said, his fake Jamaican patois replaced with an Eton-Oxford accent. I had heard De White Rasta’s speech undergo this transformation many times before but it still disconcerted me every time he made the leap from Caribbean rustic to English aristocrat.

All of these multi-leveled characters—and more—come together in a mish-mash of mystery and mixed-up motives, which makes Sun, Sand, Murder a fun read to finish out the summer. It’s intriguing to watch Creque navigate the ins-and-outs of the island, especially since procedures and training are so different than those found in traditional crime novels. The investigation can go in any direction, which gives this John Keyse-Walker’s debut novel plenty of room to offer the reader a twist-turny ride.