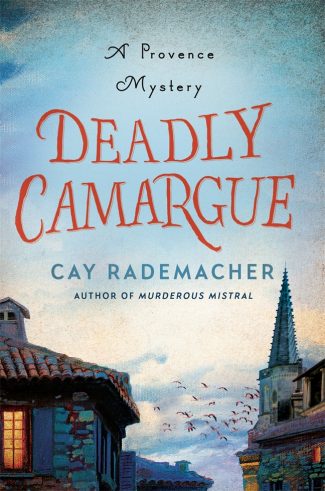 Deadly Camargue by Cay Rademacher marks the return Detectives Captaine Roger Blanc and Marius Tonon as they’re called to Camargue to investigate the suspicious death of a reporter and TV personality.

Capitaine Roger Blanc is gradually settling into life in Provence, and only occasionally thinking longingly of his old life in Paris. A heat wave has struck the Midi, and Blanc has to contend not only with what this means for the upkeep of the ramshackle oil mill he lives in, but also with the daily torpor caused by the woefully inadequate air-conditioning at his gendarmerie station. Fortunately, the heat also seems to have sapped the enthusiasm of the local criminal element for getting into mischief. Even so, Blanc and his partner, the alcoholic Lieutenant Marius Tonon, are almost excited when a case arrives to break the tedium, even if their commandant assures them that gendarmerie involvement will likely be entirely pro forma.

Out in the Camargue, a bicyclist has been gored to death by a prized fighting bull that had escaped its enclosure. At first, it looks like the kind of foolish death caused by an overconfident tourist who wanted to get an up-close selfie with one of the famed bulls of the area. But Blanc recognizes the victim immediately: Albert Cohen, a famed left-wing political journalist and television personality who recently went on sabbatical for his “health” (read: rehab). Cohen might have been the flashy type, but after reporting from battlefields and conquering a cocaine addiction, he certainly wouldn’t have thrown away his life so cheaply. This and the fact that a witness saw a light-colored car pulling away from the scene are enough to raise Blanc’s suspicions that this was no accident.

Blanc’s investigations soon lead him to a spectacular art theft from decades ago, and then to an even earlier case of murder and reactionary politics, exactly the kind of thing that Cohen would have reported on, if not been actively involved in. As Blanc tracks down the real hand behind the killing bull, he has to wonder how many layers of corruption and evil he will find, even as pressure is exerted on him from all sides, to both solve the case quickly and to make it go away.

As with the first book in the Provence Mystery series, Deadly Camargue is a thoughtful whodunnit that isn’t afraid to expose the deceit and evil hiding behind masks of elegance and gentility. It’s also a terrific look at the unique history and geography of the area. Whether discussing current events or long-forgotten scandals, Deadly Camargue is a novel lush with relevant, transporting detail, as here, where Blanc goes to see bulls just like the murder weapon in the action they were bred for:

Blanc felt as if he had suddenly become a witness to an ancient ritual, some demonic, heathen dance from prehistoric times, the sort of thing preserved forever on the walls of the Minoan palaces. A dangerous game, long forgotten or banned elsewhere but here passed down from aficionado to aficionado and celebrated. The men provoked the animal until it growled with anger, first throatily and then more quietly, which sounded even more threatening to Blanc. Then it charged at the first raseteur. The man waited until the last moment, then flitted light-footedly out of the way up the beams and from there onto the red barrier, until as surefootedly as a cat he grabbed the first bars just before the public seating area. Blanc instinctively recoiled, as the raseteur flew through the air right in front of him. Fine pearls of sweat glistened in the man’s hair; the expression on his face was frightened, relieved, excited, and angry and at the same time in a bizarre way happy. Blanc was certain that the raseteur hadn’t even noticed him. A split second later the animal crashed into the wooden beams with a thud that resounded across the arena.

The continuing evolution of Blanc’s personal and professional relationships is also engrossing. I loved all the little hints at the private lives of his supporting cast, which I’m looking forward to discovering more of in future books. I also enjoyed how, as Blanc grows more comfortable with Provence, a wry humor emerges more frequently, particularly when he’s talking with his colleague, the tech whiz Second Lieutenant Fabienne Souillard. Here he’s asking her about how art crimes are dealt with in their area:

“What’s the situation down here in the south? Provence and the Côte d’Azur are full of museums and villas of rich collectors.”

“Less than twenty percent of solved cases. There isn’t a single art expert in any of the gendarmerie brigades in the Midi. Only in Paris.”

She gave him a weary smile. “Last year in Avignon two criminals threw a few paintings into the back of a station wagon and roared off. Our colleagues found the vehicle soon enough, parked on a highway. But there were no other traces to be found: the crooks had sprayed the entire interior with a fire extinguisher.”

“Would that really be enough to get rid of all forensic clues?” Blanc asked disbelievingly.

“You’re not in the champions league anymore, mon Capitaine. This is the second division.”

With Deadly Camargue, Cay Rademacher has written not only a fine mystery—with an ending I found oddly satisfying despite its decidedly untraditional nature—but also built a community of characters that I genuinely like reading about and spending time with. I’m eagerly anticipating the next books, especially if they’re translated as beautifully from German by Peter Millar as the first two have been. It’s always a treat to know that there’s more to come in a series you enjoy.