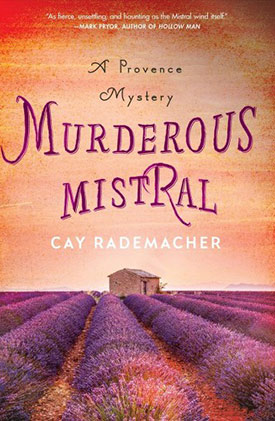 Murderous Mistral by Cay Rademacher is the first book in the Roger Blanc Provence Mystery series.

Welcome to Provence, that picturesque area of France to where hard-nosed Capitaine Roger Blanc of the gendarmerie has just been transferred from Paris after nearly single-handedly exposing the corruption of a former trade minister. It might sound like a promotion (is Provence not the loveliest part of France, located in the warm south, after all?), but Blanc knows that he’s really being removed from investigating the powerful in the nation’s capital. On hearing the news, his wife decided it was time to come clean and admit that she had a lover in Paris whom she’d rather stay with than accept exile with Blanc. At least Blanc has a place to stay in Gadet, the nowhere town to which he’s been assigned; an uncle willed him a decrepit old olive oil mill years ago. Admittedly, it’s a dump.

His unhappiness at this change of circumstances is not alleviated by his first day at work. While his colleagues seem friendly enough, his commandant, Nicolas Nkoulou, is ambitious enough to want to avoid Blanc’s political baggage. Even worse, his new partner, Lieutenant Marius Tonon, is a drunk known as the station’s bad-luck charm. Both men warn Blanc that, in Provence, everyone is corrupt, but no one gets caught.

Still reeling from his reduction in circumstances, Blanc is only too happy to be swiftly shooed out the door to investigate a routine case involving a corpse found on a garbage heap. Tonon is confident that the corpse will turn out to be a person of interest for their colleagues in nearby Marseille, meaning that they’ll be able to quickly turn over the case and subsequently enjoy a leisurely lunch (French jurisdictions being quite different from American). Tonon is none too pleased to discover that the corpse is of a local man, Charles Moreas, and that the case now falls squarely under their remit.

Blanc plunges into investigating Moreas’s death with the same zeal that made him so effective in Paris. To his surprise, he finds that his provincial colleagues are more helpful than he’d feared. As he plunges deeper into the complex maze of secrets surrounding Moreas’s death, he finds allies even where he’d expected opposition, such as here, with Nkoulou standing up for him in the face of pressure from an influential local:

The commandant gave him a long, searching look. “Over the past few days [he] has been on the phone to me a lot more often than I told you. He has been very polite, very respectful. But also, how should I put it, very firm. It would make my life easier if I threw you all out of my office here and now and forgot all about this business of yours.” He was silent for what seemed like an eternity, the expression on his face rigid, the beads of sweat glistening. Blanc had an absurd urge to take out his handkerchief and wipe them away, before they ran down the side of his face. “But I hate it when amateurs get involved in my business,” Nkoulou said at last. “Society has rules, regulations, laws. They can be tedious but they contain the wisdom of generations. I took an oath to enforce those laws, not to dismiss them because the phone keeps ringing. So get on with it.”

Cay Rademacher has assembled a terrific cast of characters for his first Roger Blanc police procedural. Expertly translated from German by Peter Millar, Murderous Mistral is a fascinating look into France’s criminal justice system and how it is inextricably linked to its political system. And politics play a very large part in this book, with local elections coming up soon even as the fierce mistral winds of Provence begin to whip through, unsettling the sensitive of temperament and stoking fears of forest fires and other calamities. Here, Blanc stops by a political rally for the National Front, the xenophobic far-right group making traction nationwide:

The people all around him could hardly have understood more than he did, but were listening with a sort of ill-tempered politeness. Every now and then some of them would wave their flags or shout slogans that were no more comprehensible than the words of the speaker on the podium. He felt as if he had been catapulted into some piece of theater, as an extra on the edge of a crowd scene where everyone else was simultaneously dull, conservative, and dangerous. The young workers and their girlfriends in short skirts from cheap shops, the dumpy middle-aged women, the pensioners in dark glasses with battered hats didn’t exactly look as if they were going to light up flaming torches and storm the houses of their fellow citizens. But he could literally smell their anger, their sense of disappointment, and above all their fear—fear for their jobs, their savings, their children’s schools, fear of the unfamiliar, the new, the threatening. Mayor Lafont was right. Fear was a vote-winner.

Murderous Mistral is a novel as satisfying for its mystery as for its beautifully rendered characters and location. It’s a wonderfully immersive journey through the Provence few talk about, exposing the crime and corruption hidden behind the beauty and warmth. Keep an eye out for the enigmatic Madame Vialaron-Allegre, Blanc’s overseeing judge who just happens to be the wife of the man who banished him from Paris. I am very eager for the rest of the series to be translated into English so I can find out what Blanc does next!

Read an excerpt from Murderous Mistral!