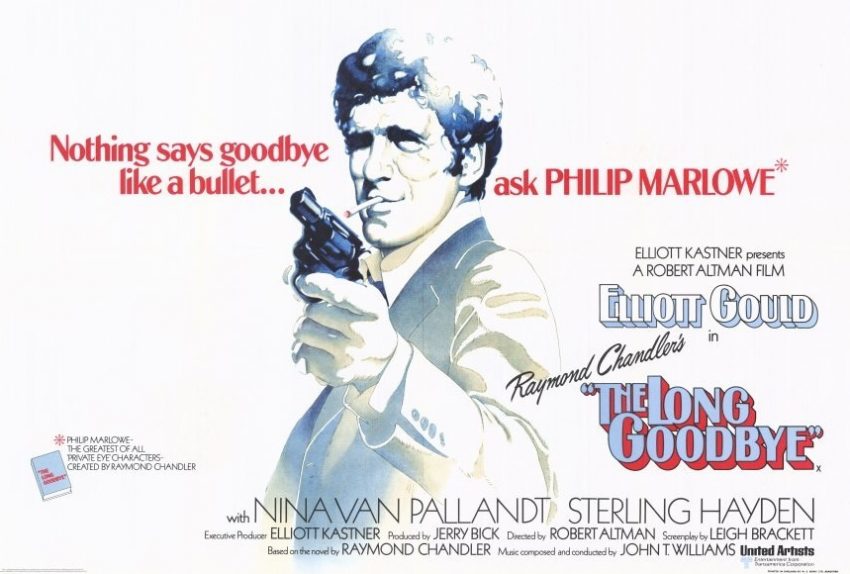 I think Altman’s rendition of The Long Goodbye gets a bad rap.

Fans of Raymond Chandler‘s poetic novels and Bogart’s iconic portrayal find Elliot Gould as a smart-ass, sleepy “Rip Van Marlowe” too much of a change in character. Gould’s Marlowe is a man who fell asleep in the ’40s and woke up to the hedonistic, nihilistic ’70s.

I like Robert Altman’s films, especially his experiments with genre such as McCabe & Mrs. Miller, which goes beyond even revisionist Western, or his classic M*A*S*H, the war movie that’s not a war movie. His famous ensemble pieces such as Nashville leave me a bit uninterested, though the excellent Short Cuts, built on a framework of Raymond Carver‘s touching and painful stories, works especially well. In The Long Goodbye, he plays with point of view; the shots and cinematography are all based on not what Marlowe sees, but how he sees it. He’s always outside a window peering in, the vision distorted by the glass. They famously exposed the film to light to dull all the colors in the first two acts, so it feels as if Marlowe has awakened from a long sleep, and his perception is fuzzy until the mystery becomes clear, and he sees what must be done.

Gould is sort of a post-hippie P.I., whose favorite line is “it’s alright with me,” and it’s a surprise that Cole Porter’s song of the same name isn’t in the soundtrack. There is only one song repeated in many variations throughout, “The Long Goodbye,” by John Williams and Johnny Mercer. At first, a Tom Waits-like gravelly voice sings it, then a woman, and the motif is even repeated by a Mariachi band when they head to Mexico. The bookends are “Hooray for Hollywood,” for a bitter dash of irony. When we meet Marlowe, he is trying to get his cat to eat cottage cheese so he doesn’t have to buy cat food; he relents, heads out, and slowly gets embroiled in the story.

Leigh Brackett, the great screenwriter of The Big Sleep, Rio Lobo and The Empire Strikes Back, takes Chandler’s novel and shuffles it around. Marlowe’s friend Terry Lennox is on the run; he wants Marlowe to take him to Mexico. Later the cops pick up Marlowe, and he finds out Terry has apparently killed his wife and committed suicide, which he finds hard to believe.

Like The Big Lebowski after it, it throws a lazy operator in the middle of a sleazy conundrum. Marlowe isn’t inept like The Dude, and while there are laughs here, this is no comedy. It’s Chandler seen through the gritty eyes of Serpico, except Marlowe is no naïf. By the end, he’s as cold as Sam Spade sending the girl to the gas chamber. Altman’s whimsy sets us up for the staccato slaps of brutality the story deals out, and makes them hit that much harder. When Marlowe is picked up by the cops, he toys with them and rubs the fingerprint ink on his face like Al Jolson in The Jazz Singer. Shortly thereafter he is shown pictures of Terry’s wife, with her face battered in.

The case leads him to Roger Wade, a drunken, raging giant of a writer played by a perfectly cast Sterling Hayden. With a full beard and fiery eyes, he’s a loquacious Hemingway, staring at the sea with a drink in his hands. He and his wife Eileen, the subtle femme fatale, knew Terry and his wife. They are also mixed up with mobster Marty Augustine, a motormouth psychotic who is at first played for laughs. Arnold Schwarzenegger has an early role as one of Marty’s thugs, a grotesque with his Olympian physique; the perfect choice for mob muscle in body-worshipping ’70s California. These little jokes aside, the movie is no less brutal than Chinatown; here it plays out with a Coke bottle instead of a switchblade, and in the end, Marlowe can trust no one. Not even his cat.

Gould’s Marlowe is a different kind of sleuth. He doesn’t deduce, or gumshoe, or beat revelations out of people. He drinks in the situation around him, and eventually comes to the likeliest conclusion. He wears a suit and tie among his neighbors performing naked yoga, drives a ’40s roadster, and stops to let a dog cross the street while ’70s land yachts honk behind him. When the Old Man becomes one with the Sea, he dives in to save him, and later argues with the cops and their useless questions: “That’s not how you solve anything… you watch and look for the connections.”

When Marlowe finally finds the loose thread he has to tug at, he moves with unusual grace and ruthlessness. He expects to need to bribe Mexican police, but they laugh and pass on his $5000 bill. Detective stories are often about a personal code; even when the character explicitly tells us he does not have “a code,” the role of the operator is to attempt to tilt the scales toward a form of justice he can live with, whether it is selfish, altruistic, cruel, or magnanimous. Marlowe’s last act in this version can be seen as justice or as selfish. Is he avenging Terry’s wife, or is he just pissed off that he lost his cat? The ending is perfect, swift, and absolute.

Q&A with Alex Michaelides, Author of The Maidens