From the hills of the Appalachian region to the copper stills of those keeping the illegal, and sometimes dangerous, tradition alive, moonshine has been a big part of American drinking history. Known by many names—moonshine, white lightning, mountain dew, Tennessee white whiskey—this potent alcohol is sure to make you see colors!

And, in Spencer Kope's Collecting the Dead, his character Magnus “Steps” Craig has synesthesia and sees unique colors left behind by everyone—something he calls “shine.”

So, for this week's Pick Your Poison—where we create a cocktail inspired by a recently published mystery, thriller, or crime novel—we do our best to make YOU see colors with a strong “The Moon's Shine” cocktail, inspired by Spencer Kope's Collecting the Dead! Collecting the Dead by Spencer Kope is a debut novel that introduces Magnus “Steps” Craig, a member of the FBI's Special Tracking Unit (Available June 28, 2016).

Magnus “Steps” Craig is part of the elite three-man Special Tracking Unit of the FBI. Called in on special cases where his skills are particularly needed, he works as a tracker. The media dubs him “The Human Bloodhound,” since Steps is renowned for his incredible ability to find and follow trails over any surface better than anyone else. But there's a secret to his success. Steps has a special ability—-a kind of synesthesia—-where he can see the 'essence' of a person, something he calls 'shine,' on everything they've touched. His ability is known to only a few people—-his father, the director of the FBI, and his partner, Special Agent Jimmy Donovan.

When the remains of a murdered woman are found, Steps recognizes the shine left by the murderer from another crime scene with a physically similar victim. And he uncovers the signature at both scenes—-the mark of a sad face. At the same time, another killer, one Steps has dubbed Leonardo and has been trying to track for over ten years, appears again, taunting Steps. But while Steps tries to find a clue that will lead him to Leonardo, the case of the Sad Face Killer heats up. The team uncovers eleven possible victims: missing women who fit the same pattern. Using his skill and the resources of the Bureau, it is a race against time to find the killer before it's too late.

Read an excerpt of Collecting the Dead here! So, make yourself “The Moon's Shine” (maybe not 2 or 10 this time—it is moonshine, by the way), and then, make sure to pick up your copy of Collecting the Dead by Spencer Kope!

Naked in Whatcom County: Tales from a Crime Analyst

Anyone who’s been in law enforcement more than 10 minutes knows that a lot of crazy things go on behind the scenes—stuff that the general public doesn’t hear about and probably can’t relate to. Let’s face it, if you’re a receptionist, you’ve probably never fingerprinted a corpse in between typing and filing, and I’m guessing… 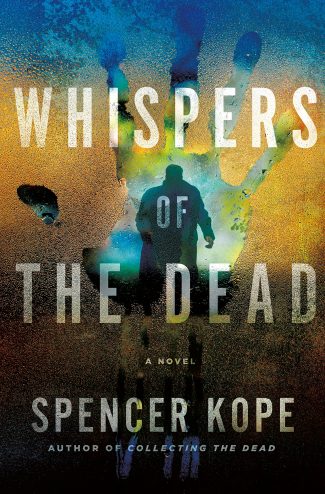 In Whispers of the Dead by Spencer Kope, a series of bizarre murders―the victims nearly unidentifiable―forces FBI tracker “Steps” Craig to match wits with the most cold-blooded killer he’s ever encountered. Whispers of the Dead, written by Spencer Kope, follows “Steps” Craig, one of the most well-known trackers for the FBI. He is best known for his…