Q&A with Alex Michaelides, Author of The Maidens

June 9, 2021
Join us for an exclusive interview with New York Times bestselling author Alex Michaelides about his new novel, The Maidens, a spellbinding tale of psychological suspense that weaves together Greek mythology, murder, and obsession.

PLUS: Scroll to the bottom to enter for your chance to win a copy of The Maidens!

Congratulations on an amazing second novel! The Maidens contains some of the key elements that continue to draw readers to The Silent Patient — Greek mythology, therapy, and a psychologist at the center of a murder mystery. What drew you back to these themes while writing The Maidens?

When I first decided to write The Silent Patient, I thought the smart thing to do would be to set the novel in a world I knew well. I knew I needed a detective, but I didn’t know anything about detectives and didn’t want to do all the research.  So I thought how well I know psychotherapists and psychiatric units, and decided to make my detective into a psychotherapist.

Likewise, in The Maidens, Marianna is a group therapist, as I know a fair bit about group therapy.  I think that when groups work well, they can be incredibly healing.  I had two different bouts of group therapy: a successful and positive one for a couple of years and then another one for about a year or so. The second group was a major reason why I quit my psychotherapy training. I realized that my therapist, the group analyst, was in fact rather narcissistic and sadistic, and prone to bullying the most vulnerable members of the group. Several of his patients seemed unable to leave the group: They had been with him in this group for twenty years. The group was stagnant and toxic.

And I began to see that groups are a perfect way to intimidate and unconsciously dominate vulnerable people. We make our particular group into our parent. So if we are trying to protect our father, or protect ourselves from certain knowledge about our father, or simply are obedient good little children who are programmed to obey, we will have a very submissive relationship to the group. So I think groups are fascinating, but highly dangerous and prone to abuse.

That abuse was something else I wanted to explore in The Maidens: how toxic patriarchy can dominate and destroy these young women’s lives. For me the whole point of the novel is really simply this: It’s about what happens when we mistake abuse for love at a very young age, and how this mistake colors the rest of our life and affects the way we see ourselves and other people. And that fascinates me as a subject.

Tell us about your process in creating the plot for The Maidens.

Well, as you pointed out, I also draw on Greek mythology once again. I think growing up in Cyprus, immersed in Greek mythology and Greek tragedies, inevitably provided me with a world in which to dwell creatively as a writer. I’m extremely grateful for my upbringing and my education, my heritage, I suppose — it’s definitely enriched me as a writer.  I’m always thinking about the myths — they are timeless and violent, magical and powerful; stories about passion and heartbreak and love and loss. I feel closest to Euripides; he’d have to be on my list of writers who have majorly influenced me.  And in The Maidens I’m looking at the myth of Iphigenia, who was sacrificed by her infanticidal father, Agamemnon, at the start the Trojan War. Except in Euripides’ version of the myth, she sacrifices herself to please her father — which is a much more complicated and perverse relationship. And something about that — about why we sacrifice ourselves for others, in order to win their “love” — captured my imagination. I looked for a way of writing about that story in a fresh way, and the plot grew from there.

The Maidens takes place at Cambridge University in the United Kingdom, a setting which proves to be both beautiful and ominous. Why did you decide to set your novel there?

To be honest, I simply went back to my main influence as a thriller writer — Agatha Christie.  I asked myself what Christie would do. That’s really the only question I ever ask, in terms of writing a novel. And I thought, well, she would begin with choosing another iconic enclosed location, in which she always sets her stories (a small island, a country house, an airplane, a train, a boat — I could go on and on). The reason I set The Silent Patient inside a psychiatric institute is because I knew that Christie had never done that, although it was a perfect location for a murder mystery. So with that in mind, it occurred to me that she had never done anything set at college in a university, like Oxford or Cambridge.

I also love Dorothy L. Sayers, and Lord Peter Wimsey and Harriet Vane have given me so much pleasure over the years. I particularly love Gaudy Night, where they investigate a series of bizarre happenings at an Oxford College. And I thought I would like to try and write something a bit like that — hence The Maidens.  Cambridge is also one of my favorite places, and being a student there was one of the happiest periods of my life. It’s incredibly beautiful, and provides a great contrast to a series of murders.

Researching the book gave me the pleasant opportunity to return to Cambridge frequently over the past three years. I would often stay in a hotel there for five days and take a little notebook with me, and follow my characters around the city.  I made sure I did everything Mariana did at the time she was meant to do it — I would go to the Eagle at nine o’clock like she did, and sit there alone, have a drink and take notes, and think about the chapter I had to write. Doing this alone added to a sense of loneliness and melancholy and nostalgia for my own youth. All of which I tried to put into Mariana and into the novel.

How did your writing process change with your second book?

The actual writing of the book during lockdown gave me a way to escape from my apartment — in my mind, at least. Every day, I was able to journey to Cambridge in my head, and try to live there. And in a way, lockdown was good for me creatively; it enabled me to focus. There’s nothing like being locked up in your apartment to concentrate your mind.

I felt a lot of pressure, most of it self-inflicted, after the success of The Silent Patient. When I wrote my first novel, I had no pressure at all — I wrote it just for myself, in complete isolation.  There was no audience — I didn’t even have an agent. But now imagining my editors, or agent, or publishers reading it, well, it does affect you.  All I can do is write the best kind of detective story that I know how, and hope other people like it.

The way I write is this: I get up, have coffee, go to the gym, and then I come back and meditate for an hour or more until I feel ready and psychologically able to write. Otherwise I’m intimidated, even dominated by the negative voices in my head, telling me I’m talentless and won’t succeed. Even after the success of The Silent Patient, I still have those voices — they are louder if anything — and it’s only through this process of meditation that I can get into a place of concentration and awareness, where I am able to somehow either transcend that negative thought, or dive deep underneath it. But to get there every day is an absolute battle.

And yet it’s not just about writing, it’s about life itself.  Meditation and being present, being aware, being in this very second, I believe is the absolute secret to a happy life. So this is very important to me. And I owe any success I’ve had as writer to this. I couldn’t even imagine trying to write a single word without having meditated first. 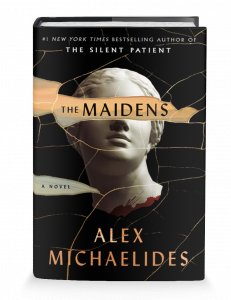 The Maidens Comment Sweepstakes: NO PURCHASE NECESSARY TO ENTER OR WIN.  A purchase does not improve your chances of winning.  Sweepstakes open to legal residents of 50 United States, D.C., and Canada (excluding Quebec), who are 18 years or older as of the date of entry.  To enter, complete the “Post a Comment” entry at https://www.criminalelement.com/qa-with-alex-michaelides-author-of-the-maidens beginning at 12:00 a.m. Eastern Time (ET) June 9, 2021. Sweepstakes ends at 11:59 p.m. ET June 17, 2021. Void outside the United States and Canada and where prohibited by law. Please see full details and official rules here. Sponsor: Macmillan, 120 Broadway, New York, NY 10271.