Think of the career of acclaimed film director Wim Wenders (1945-) and what’s the first title of his that comes to your mind? Paris, Texas (1984)? Wings of Desire (1987)? Maybe Buena Vista Social Club (1999)? The cinematic work of his I personally treasure the most is Alice in the Cities (1974). I bet you could ask 1,000 Wenders fans this question and not a single one of them would mention his 1982 neo-noir Hammett. This film, based on a 1975 novel by Joe Gores and executively produced by Francis Ford Coppola, combines fact with fiction in presenting Dashiell Hammett as a crime fiction author who gets pulled into investigating a series of transgressions in his actual life. It was done for Coppola’s Zoetrope Studios outfit, distributed jointly by Orion Pictures and Warner Bros, and shown at Cannes. Yet no critics made much of it at the time of its release, and it’s been all but forgotten since. And oh, by the way, there’s some question as to whether the known version was really even directed by Wenders. What??

So what’s the deal? Is Hammett a rare dud in the otherwise stellar film careers of Wenders and Coppola? Did Wenders just walk away from it at some point? Or is it an under-appreciated work that deserves a second look, close to four decades after its opening? Let’s get under the hood of the film, Gores’s novel, and that matter of who really directed the movie.

There are some major differences in the story between novel and film. Let’s discuss the book first. Gores (1931-2011), a multi Edgar Award winner, set the tale is his favored literary locale of San Francisco, where, of course, Hammett lived part of his life. The year is 1927 or ‘28. We find Gores’s Hammett to be a lot like the one we know from the maverick author’s real-life story. He’s a 34-year-old former Pinkerton detective turned hardboiled crime fiction writer. He drinks too much, gambles too much, is estranged from his wife, and struggles to pay the bills. He’s working on his novel Red Harvest, as well as a revision of The Dain Curse, when a former Pinkerton colleague comes to him with a proposition. This guy, Atkinson, now works as a freelance private investigator and has been hired by a reform committee to lead a probe into law enforcement corruption—crooked police taking payouts from brothel and speakeasy owners in exchange for protection.

Atkinson wants Hammett to join his team, but Hammett only gets halfway interested in this. He’d rather alternate his time between drinking, working on his novels, and being in the company of the good-natured, nice-looking young woman who is his neighbor. But when Atkinson gets brutally murdered shortly after he places a desperate S.O.S. call to a too-drunk Hammett in the wee hours while working the case, the author feels enough guilt and anger to walk away from the bottle and typewriter. He seeks to learn about, and exact revenge on, those responsible for the killing. He gets himself hired to take Atkinson’s former position as head of the team of detectives doing the reform committee’s leg work. 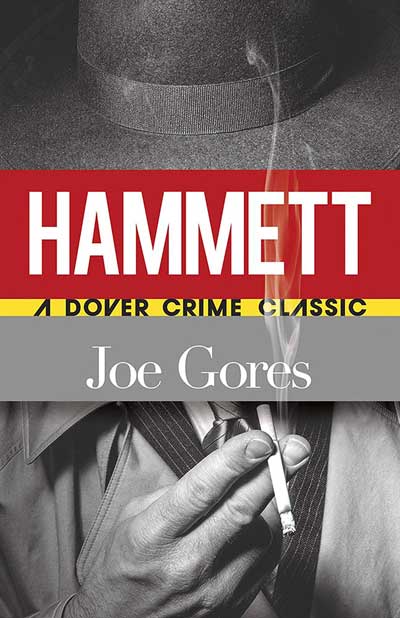 In the Gores book, something else the reform committee particularly wants looked into is a house of prostitution run by a well-established, police-protected woman named Molly Farr. This is because the teenage son of a powerful man on the committee was found to have been a patron of the establishment. The boy’s mother gets enraged at that discovery and wants heads to roll. Ms. Farr has in her employ, and living under her roof, a teenage girl of Chinese descent named Crystal Tam. When Atkinson, and then Hammett after Atkinson gets knocked off, seeks to talk to Farr and Tam is when the story’s big revelations come out—and when we find out that the city’s corruption goes far beyond a few beat cops on the take.

Ok, let’s leave the plot of Gores’s novel there. Interested readers new to the book can learn about the rest on their own. It’s an excellent read if 50 pages or so too long with some extraneous content that should have been edited out. That quibble notwithstanding, it’s a strong work of edgy crime fiction. The story is compelling and suspenseful, the characters well-drawn and memorable. And Gores used his vast knowledge of San Francisco’s history, characters, and physical layout, as well as his knowledge of Hammett’s life story, to good effects.

Wenders wasn’t new to making films based on crime novels when he started work on Hammett. The American Friend, his superb psychological thriller from 1977, is drawn from two of Patricia Highsmith’s Ripley novels. On Hammett, he worked from a screenplay that was authored by established crime novelist Ross Thomas, in conjunction with Dennis O’Flaherty. Frederic Forrest, who’d been in Coppola’s Apocalypse Now (1979), among other notable roles, was brought on to portray the title character. In the film, he looks amazingly like Hammett. Peter Boyle, whom some might mainly associate with his part in Taxi Driver (1976), while others may primarily remember him from the TV sitcom Everybody Loves Raymond, plays a guy named Jimmy Ryan, a character who is like Atkinson from the book but with some different circumstances. TV star Marilu Henner (Taxi) got the role of Hammett’s good-natured, good-looking neighbor. Roy Kinnear and Elisha Cook, Jr. are standout thespians who took small parts in the film.

The biggest difference in the story between Gores’s novel and the film has to do with the character of Crystal (last name Tam in the book, Ling in the movie), the teenage associate of the madam Molly Farr in Gores’s novel. In the movie, she is the most central character, next to Hammett, even if she’s not on the screen all that often. In the book, she is a shadowy figure who only becomes prominent in the last third of the story.

In an early part of the film, after we’ve been introduced to the ways and lifestyle of Hammett, the Boyle character comes to him, wanting his help on a case he’s working as a P.I. But whereas in the novel Atkinson wants Hammett to help him bust up a whole crime ring, Ryan’s assignment for Hammett in the movie is much more specific: he wants the investigator-turned-author to assist him in locating this girl, Crystal Ling. The film’s Crystal—played by Lydia Lei, Jasmine from Dr. Detroit (1983)—is a 17-year-old beauty, originally from China, who’s been bought and sold by unsavory parties as a sex slave since she was 11. Yes, I said 11. She’s come to be a known figure in the sex underworld of Chinatown, and now she’s missing. When Hammett sets into aiding Ryan in the quest to locate the girl, he quickly learns that Ryan is far from the only person who seems to desperately want to learn the whereabouts of Crystal Ling. The more Hammett investigates, the more he realizes just how important a figure this Ling girl is in the local, back-alley skin trade, and the more he learns that some very high-powered members of the community have particular interests in knowing her current whereabouts. The more he probes, the more complicated and disturbing the story of Crystal Ling and her associates becomes.

Largely ignored at its time of release, Hammett has gotten mixed reviews—back in the day as well as in more recent appraisals. In 1982, Vogue critic Molly Haskell said it “exudes an atmosphere of leaden make-believe.” Richard Combs of Sight and Sound found it in himself to say a few positive things about the film in his unclear review but mostly in a way that damned it with faint praise. Other expert reviews found on Rotten Tomatoes and elsewhere are more complimentary. Some see it as a worthy work of neo-noir, and some find Forrest particularly effective in his portrayal of Hammett. For what it’s worth, the nearly 3,000 IMDB lay reviewers give it an average score of 6.5 out of 10, and the currently 268 Amazon customer reviews yield an unflattering consensus of three out of five stars.

So is the film any good or not? I say it is. There are moments when it’s too stylized, and all the countless scenes that show Hammett sneaking in a pull of whiskey at any odd moment feel cliched. But Forrest and Boyle are both excellent in their roles. And, while her feature film career CV otherwise contains scant credits besides her role in Dr. Detroit and a momentary part in Cannonball Run II (1984), it has to be said that Lydia Lei is convincing and effective as Crystal Ling. She should have been given more film work in the era. The story is believable for the most part, and it moves with a tangent-free briskness missing in Gores’s novel. It’s atmospheric, suspenseful, and makes you cheer for certain characters and hate others. Would I rank it in the top tier of films noir? No, not at all. But it’s a worthwhile watch.

As mentioned above, there’s a backstory to the film version of Hammett that comes with its own share of suspense and intrigue. There’s a question as to whether Wenders was actually the director of the final version of the movie. It’s known that two full cuts were made, the first with Wenders clearly directing. Neither Coppola nor others from his Zoetrope Studios production company were enamored of this iteration, apparently finding it too moody and lacking in action. That version was destroyed and a second one, which came to be the official product, was shot. Some accounts one can find online state outright that Coppola took the seat from Wenders and was the real director of the released version, without taking credit as such. Other accounts state that as a possibility but not a certainty. But in a 2015 interview with Indie Wire, Wenders avers that he directed both versions while sounding like the entire project wasn’t much fun for him.

The “Who was the real director?” question is one worthy of further probing. But whether Wenders or Coppola is ultimately artistically responsible for the film, it’s an underrated work of film noir that deserves more attention. If you care about Dashiell Hammett, Wim Wenders, Francis Ford Coppola, film noir and/or noir fiction in general, use some of the extra free time most of us have during this pandemic and read Gores’s novel, then watch the movie.