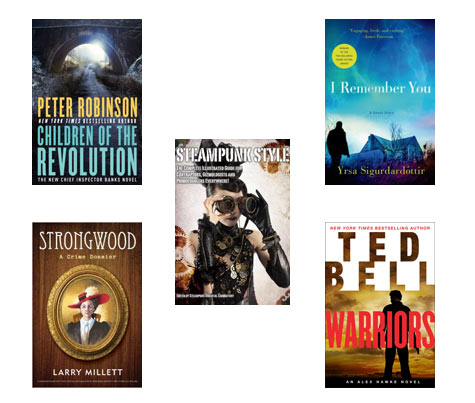 Each one of these five exciting titles can be yours! Enter for a chance to win!

NO PURCHASE NECESSARY. A PURCHASE DOES NOT INCREASE YOUR CHANCE OF WINNING. Sweepstakes open to legal residents of 50 United States, D.C., and Canada (excluding Quebec), who are 18 years or older as of the date of entry. Promotion begins March 25, 2014, at 12:00 pm ET, and ends April 8, 2014, 11:59 am ET. Void in Puerto Rico and wherever prohibited by law. Click here for details and official rules.

I Remember You by Yrsa Sigurdardóttir

In this terrifying tale, three friends set to work renovating a rundown house in a remote, totally isolated location. But they soon realize they are not as alone as they thought. Something wants them to leave. Meanwhile, in a nearby town, a young doctor investigating the suicide of an elderly woman discovers that she was obsessed with his vanished son. When the two stories collide, the shocking truth becomes horribly clear.

Children of the Revolution by Peter Robinson

The body of a disgraced college lecturer is found on an abandoned railway line. In the four years since his dismissal for sexual misconduct, he’d been living like a hermit. So where did he get the 5,000 pounds found in his pocket?

Leading the investigation, Detective Chief Inspector Alan Banks begins to suspect that the victim's past may be connected to his death. Forty years ago the dead man attended a university that was a hotbed of militant protest and divisive, bitter politics. And as the seasoned detective well knows, some grudges are never forgotten—or forgiven.

Just as he’s about to break the case open, his superior warns him to back off. Yet Banks isn’t about to stop, even if it means risking his career. He's certain there’s more to the mystery than meets the eye . . . and more skeletons to uncover before the case can finally be closed.

The place is Minneapolis, the year is 1903, and Michael Masterson has fallen in love, or so he claims, with Addie Strongwood, a beautiful working-class girl with an interesting past and a mind of her own. But their promising relationship quickly begins to disintegrate before reaching a violent conclusion. Amid allegations of seduction, rape, and blackmail, Michael is shot dead and Addie goes on trial for first-degree murder. As the case unfolds in a welter of conflicting evidence and surprise discoveries, a jury must decide whether Addie acted in self-defense or killed her one-time lover with the coldest of calculation.

Reconstructing the case through trial testimony, newspaper stories, the journal of Addie’s flamboyant defense attorney, and her own first-person account as serialized in the Minneapolis Tribune, Larry Millett builds a suspenseful tale of love, money, betrayal, and death. Sherlock Holmes and Shadwell Rafferty, long known to readers from Millett’s previous mysteries, play crucial roles in the unraveling of the case, which also offers a glimpse into the sharply divided worlds of the rich and the poor at the dawn of the twentieth century.

On the streets of Washington, D.C., a brilliant scientist in the high-tech military industry, the brains behind a revolutionary fighter aircraft prototype in development by the Pentagon, is snatched by masked thugs—along with his wife and children—and disappears without a trace.

Now, five years later, an elderly professor at Cambridge University has been murdered, a victim of bizarre, ancient Chinese torture methods. Alex Hawke teams up with former chief inspector Ambrose Congreve, his Scotland Yard colleague and friend, to find the killer, but this death is merely the opening gambit in a tense and lethal game of geopolitical brinkmanship.

In the United States, the president's behavior makes many question his fitness for leadership. Is his mental health deteriorating—or is there something far more sinister at work? The answer is crucial, for hostilities are rapidly escalating among China, North Korea, and the United States. At a somber state funeral in Arlington Cemetery, an unmanned drone twice the size of a twin-engine Cessna dives out of the sky and wreaks chaos on a shocked crowd of military and civilian dignitaries. In the East China Sea, a North Korean patrol crew murders four sailors aboard a U.S. Navy vessel. Then China launches vastly advanced fighter jets and a megasubmarine far more sophisticated than any seen before—military technology that might leapfrog everything the U.S. and Great Britain now possess.

With the situation edging closer and closer to the yawning abyss, Hawke faces a female Chinese mastermind and assassin named Chyna Moon. He must pull off his most daring mission yet: infiltrate enemy territory and neutralize their advantage . . . or risk the outbreak of World War III.

Defined by the Oxford Dictionary as “a genre of science fiction that typically features steam-powered machinery rather than advanced technology”, Steampunk has taken the world by storm, rapidly moving from literature into movies, games and fashion. This book is an indispensable guide for those looking for inspiration and projects to create, from robot arms to jewellery and goggles!