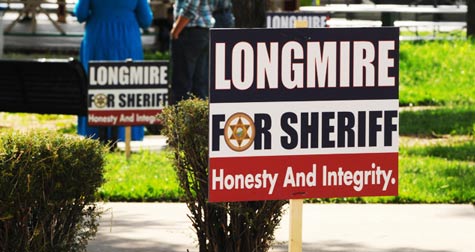 The long-awaited and pivotal day has finally arrived: Absaroka County will elect (or re-elect) its new sheriff. But the political gets very personal in this stellar episode that just might be the best of the show’s two seasons thus far.

We open at a political rally/shindig for Walt where everyone’s letting down their hair a bit. They’ve brought their casual clothes out of mothballs, Ferg and Cady are cutting a swift-footed rug (that Ferg is indeed light on his feet!), Henry’s giving speeches (as he does), Ruby and Vic are having some libations, even Walt is coerced into dancing with a constituent by a laughing Lizzie.  And after the party, our fair sheriff finally gets a little horizontal action that doesn’t involve handcuffs or gunplay (er, we think). Life is good…

But not for long…this is a melancholy drama, remember? Unfortunately, shortly after Cady leaves the party to shepherd some non-driving voters to the polling place, Vic and Ferg get a call for a hit-and-run and the victim is none other than Walt’s daughter, unconscious and critically injured. And though I say unfortunately, her accident is actually just the shot in the arm the show needs, because for the first time in a long time, we get some real emotion from our gang. We’re reminded that these people aren’t just coworkers who are often irritable or downright angry with each other but…they actually like each other and care about each other! We discover that Ferg’s long harbored a crush on Cady and he’s so distraught about the accident that he’s a bit out of control and Vic has to rein him in. Adam Bartley and Katee Sackhoff have a lovely, genuinely moving scene in the sheriff’s office where they’re trying to get on with solving the case and are just overcome, their voices breaking with emotion. Branch, who finds out belatedly as he’s been caught up with his own election day promotions, is literally floored, having a breakdown when he goes to investigate the car that hit Cady.

And Walt, as anyone would imagine, is completely in pieces on the inside and completely numb on the surface. He keeps flashing back to Cady as a baby and little girl, and when he finally is roused to help with the case once Vic and Ferg hit some dead ends, his anger explodes, not just at the perpetrator of the accident, but at himself more than anything.

If we didn’t already know Walt had a martyr complex, this episode seriously drives it home. He berates himself for being selfish and putting his own happiness first and “allowing this to happen.” Which….uh…okay. (Because of his one night stand? because I don’t remember Walt being too happy otherwise! Poor Lizzie! I suspect it’s the last we might see of her.) Then later, Henry talks to him about his own guilt, thinking that the things they did in Denver brought this bad luck around. Walt agrees and wants to do penance via a sacrifice ritual that “white men aren’t supposed to do.”And it’s some pretty freaky stuff involving eagle feathers (?) and being strung up to a post by a lead attached to steel rings pierced through his chest! (Too bad, Lizzie could’ve probably had some fun with that.) It’s honestly a little much, making Walt look like the world’s biggest masochist/drama queen. But it sure is a dramatic way to end an episode. And Lou Diamond Phillips’ Henry gets to do a full Native American dress and war cry.

The whole episode is actually a really fantastic showcase for our five leads, as well as some nice moments for Cady, Lizzie, Ruby and Bob Barnes. There are a lot of great brief scenes where it’s just nice to see these characters interacting in new or moving ways because their emotions overcome them. Vic gets a bit touchy-feely comforting Walt in the hospital and then sort of abruptly realizes what she’s doing. A hurt Ferg actually confronts a shocked and abashed Branch about why he had to date Cady of all people. These are the kinds of scenes that really flesh out the emotional journeys and develop these characters in interesting ways that I wish could be incorporated in every episode of the show. It’s the best kind of drama because the mystery thoroughly and deeply impacts and even CHANGES these characters in profound ways. Oh yeah, and that election—Walt won…by only 17 votes. That’s a pretty narrow margin right there. The episode nicely sets up another mystery to carry out the last three episodes as well, when Branch discovers that the tire Cady was changing when she got hit was intentionally sliced (by someone who didn’t want her to get those voters to the polls for Longmire, perhaps? A certain Jacob Nighthorse protecting the money he invested in Branch?) It’ll be interesting to see what Branch will do next, as it’s hard to imagine him remaining a deputy (as Vic gleefully points out in the promos for the next episode). And of course, Cady’s still in critical condition too.  Hopefully, her continuing peril will bring yet more emotional waves to crest through the remaining episodes of the season.