Just as the Bible tells us that it’s not money per se that leads to evil, but rather the love of money, so too it is with antiques: It’s not that antiques can lead to murder, it’s the emotions that swirl around them, emotions like greed, jealousy, revenge, fear, love, or hate.

When you deal in high-end antiques, like my protagonist, Josie Prescott, you need to be discreet. You need to consider only the object, not the undercurrents of rivals’ ill intentions or the prayers of children that they’re the favorite after all. Emotions can fester and grow whether the object is a counterfeit, a two dollar collectible, or a priceless antique. Part of the job is being able to tell the three apart. Using a combination of experience, science, and intuition, antiques appraisers consider rarity, scarcity, condition, taste, past sales, association, and provenance to first authenticate, then value objects.

Of all those factors, provenance is often the most complicated. Tracing the object’s ownership from the artist or maker’s completion of the work to the current day is meticulous, painstaking work, but without clear title, there can be no confidence of authenticity, nor will an object sell for top dollar. This is a serious concern since fraud is more common than you might think. In fact, Matisse once remarked, “I’ve painted 1,500 canvases. 2,500 of them are in America.” Ouch.

Let me give you a purely American example. Let’s say that you acquire a table—it’s a good looking piece—made of, let us say, mahogany. It’s beautifully crafted with matched grain wood and peg and dowel construction, and it’s lower than current tables, suggesting that it was made when people were shorter—probably in the 18th century. Let’s assume that it’s a little scratched, but no more than you would expect of a well-used object more than two hundred years old.

So far, it would seem that you have an example of fine furniture, but without more information, it would sell for perhaps $500.

Now let’s turn the table over. You notice a maker’s mark. Not all furniture is marked, of course, but a lot is. You see the initials, “TC.” A proprietary database reveals that a cabinetmaker named Thomas Cooper marked his work with initials. He worked for the Philadelphia Woodworking Company from 1772 to 1776 at which point he opened his own business and stopped marking his furniture with his name. Instead he used a mark he created for his company—probably, if you think about it, he was following good entrepreneurial instincts to sublimate his individual reputation for the good of his firm—he wanted to build his brand, so he created a recognizable logo. Therefore, as near as you can tell, the table was crafted by that man while he worked for that Philadelphia manufacturer during those four years. How much is your table worth? Well, now that you can demonstrate with a high degree of confidence that your table was produced in the late 1700s in Philadelphia, probably your table is worth as much as $5,000 or even $10,000.

Sometimes, remarkable as it seems, eighteenth century business records exist—and it’s possible that you’ll be able to discover the sales record of that particular table. In this case, after the appraiser sorts through reams of Historical Society documents, she discovers sales records indicating that a dozen tables just like yours were sold to a Philadelphia hotel. You can’t trace your specific table, but it might be reasonable to conclude that your table was part of that bulk sale. You look up the hotel and discover that it was a fairly posh place of a dozen rooms. Apparently the hotel’s owners ordered a new table for every room.

From the Historical Society, you learn that there’s a museum in Pennsylvania that has the guest registration records for the hotel. In examining it, you learn that Thomas Jefferson stayed in that hotel for two years, including the period during which he wrote the Declaration of Independence. Yikes! What are the chances he wrote the Declaration of Independence while seated at your table? Even without knowing for sure that the table was in that hotel or used by the man who would become the country’s third president… how much do you think your table is worth now? Enough to kill for?

Jane K. Cleland writes the Josie Prescott Antiques Mystery series for St. Martin's Minotaur, with the most recent novel, Lethal Treasure, released in June, 2013. Jane owned a rare book store on the rugged coast of New Hampshire, where the books are set. She now lives in New York City.

Each week at CrimeHQ, we like to give an upcoming book the GIFnotes treatment. For those that don't know: GIFnotes = Giving you the basic plot summary of an upcoming book with the help of the Graphics Interchange Format. After creating several visual guides to our favorite books, we'd like to give YOU the opportunity to win 12… A Killer Ball at Honeychurch Hall by Hannah Dennison is the 3rd installment of the Honeychurch Hall Mystery series (Available May 3, 2016). When antique dealer Kat Stanford stumbles upon the partially mummified body of a young woman in an abandoned wing at Honeychurch Hall, suspicion falls on those who had been living there many… 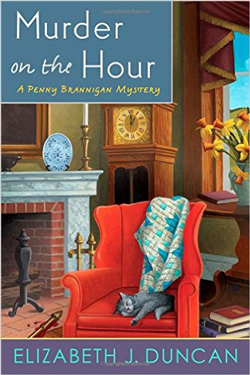 Murder on the Hour: New Excerpt

Murder on the Hour by Elizabeth J. Duncan is the 7th Penny Brannigan Mystery (Available April 12, 2016). The residents of Llanelen are brimming with excitement. Antiques Cymru, a regional take on the popular national TV show, is coming to the Welsh town and people are flocking from miles around, hoping their attic treasures turn…