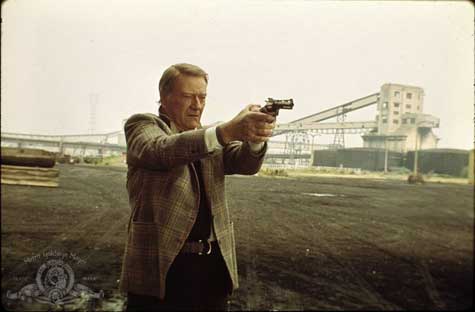 John Wayne (1907-1979), aka The Duke, remained a top ten box office draw for an impressive quarter of a century during which he was primarily known for Western roles in seminal productions like The Searchers (1956), Hondo (1953), and Rio Bravo (1959) and war films like his influential portrayal of Sergeant Stryker in Sands of Iwo Jima (1949). In his last decade, as the lights dimmed on the Western stage and American audiences seemed to have had enough of flag-waving war movies, Wayne turned to playing police officers in McQ (1974) and Brannigan (1975). Clint Eastwood had already made the successful transition from Spaghetti Westerns to playing Dirty Harry, a role that allegedly Wayne and Frank Sinatra had turned down though other reports suggest they were considered too old. Either way, the Chairman of the Board had also made the leap from Western/war flicks to cops and robbers like The Detective (1968). So when Eastwood’s Dirty Harry and its sequels went on to be cultural mega hits, Wayne quickly switched gears and made two cop films back to back to capitalize on that trend. The results were intriguing but less than satisfying. Wayne was in his late 60’s when he played a Detective Lieutenant affectionately known as “McQ”, a sports car driving police officer who lives on a houseboat. That sounds like a bit of a stretch, yet the agile Duke physically pulls it off as he tracks down cop killers in the Seattle area. What doesn’t work so well is the script for this film, particularly dialogue like “he slipped on a wet floor and fell” after The Duke knocks a local businessman (and major drug dealer) named Manny Santiago (Al Lettieri) unconscious. When a hippie aggressively pesters him, McQ kicks him in the shins and throws out for laughs, “he bumped into a chair.” The lines seem cartoonish these days and I suspect rang just as absurd way back then. The film was influenced by Dirty Harry (1971) but what got audiences behind Harry Callahan abusing a psycho’s (Andy Robinson) civil rights was a young teenage girl buried alive. For right or wrong, we were invested, emotionally, with Eastwood’s breaking rules in hopes of saving her life. In contrast, McQ’s thuggish ways happen so early in the film were almost left identifying with the bad guys—but not quite because the hippies and hoods are cardboard cutouts themselves.

No surprise when his captain named Kosterman (Eddie Albert) tells him to stay off the case, McQ quits throwing his gun and badge across the table. Action highlights include Wayne doing a Steve McQueen, chasing some bad guys in his 1973 Pontiac Firebird Trans Am “Green Hornet” and, later, eliminates them using a Mac 10 submachine gun in a climatic chase along a beach. White-knuckle scenes executed well, but too bad someone hadn’t taken the Mac 10 to the writing and started fresh. Even harder to believe this wreck of a movie was directed by John Sturges of The Magnificent Seven and The Great Escape fame. Brannigan benefits, like McQ, from The Duke in a modern setting and this time specifically England where he journeys to extradite a hood named Larkin played by John Vernon. Wayne is Mike Brannigan, a Chicago detective with an independent streak; think Frank Bullitt, Harry Callahan, and Popeye Doyle rolled into one. Larkin has hired a hitman named Gorman (Daniel Pipon) to kill Brannigan and the assassin begins immediately following Brannigan when the cop lands at Heathrow.  Subsequently, Larkin is kidnapped while getting a massage and whisked away and held for ransom. His lawyer played by Mel Ferrer goes to the police (though he was told not to) and the department sets up a controlled drop that the bad guys outwit them by drilling a hole beneath the public mailbox where the money is deposited. The plot becomes a bit convoluted with double crosses and more than one baddie targeting Brannigan and this is roughly the midway point in the film and therein lies Brannigan’s main problem. It is way, way too slow a build-up for an action film though Wayne’s star presence and the cop-out-of-water plot more or less pulls it off. But even now, almost forty years later, the film could benefit from a needed edit. Why follow Larkin as he meanders through a health club before he is kidnapped? Or watch Brannigan as he talks to his land lady and then in real time takes an elevator to his room? The second half with an amusing barroom brawl and solid chase with a thrilling car jumping a widening gap in the Tower Bridge save the film from being a snooze. All in all passable rainy day fare but not much more.

If Wayne had started making cop films a bit earlier in his career, I think he would have eventually hit his stride. Of the two, Brannigan—though flawed— is worth seeing and in many ways resembles a Western in its storytelling approach. The Duke made two more films after his police departures, Rooster Cogburn (1975) and The Shootist (1976), both returning him to the more familiar setting of horses and six shooters.