Georgia Tann stole, abused, and sold infants for decades without getting caught. 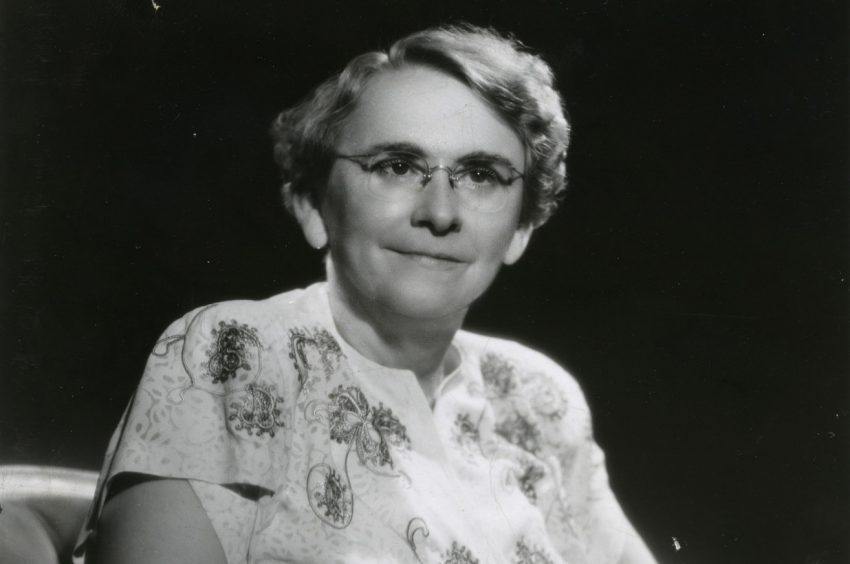 Georgia Tann left a dark legacy throughout the country, sewing tears among children and their birth parents for decades. Wearing gray hair, spectacles, a floral dress, and a sweet Southern smile, Tann looked like any caring grandmother—but most who encountered her learned that it was all a vile mask of horror and deceit.

In 1924, Georgia Tann became the executive secretary of the Memphis branch of the Tennessee Children’s Home Society, a charitable orphanage. Intelligent and well-educated, she quickly established herself as the foremost agent for adoptions, not only in Tennessee but in the entire United States. Her tenacity and foresight, and seemingly limitless passion for “infants of a tender age,” helped to transform adoption into a respectable cause, even chic within wealthier circles. Her reputation skyrocketed, placing her on the national stage, where organizations around the country sought her advice on all aspects of adoption and child-rearing. She spoke at conferences in New York, Chicago, and Los Angeles, rubbed elbows with celebrities, advised First Lady Eleanor Roosevelt on adoption matters, and was invited to the presidential inauguration of Harry Truman.

Unbeknownst to most, the unmarried woman widely recognized for destigmatizing adoption was also busy kidnapping, abusing, molesting, and selling children. Though the state required her to place babies solely with Tennessee parents for a fee to the charity not to exceed $7.00, she placed children in all forty-eight states with anyone willing to pay an exorbitant fee to her. With some paying more than $100,000 per child in today’s dollars, Tann soon became a millionaire and a dark force beyond reckoning.

Because white children with blond hair and blue eyes commanded the highest price, Tann continually increased her “inventory” of blondes through trickery, abduction, and blackmail. She preyed on unwed mothers and poor, uneducated families through the use of “spotters,” who’d report to her about children to snatch. Tann’s spotters included nurses, welfare workers, deputy sheriffs, lawyers, and doctors. Nurses would tell single mothers that their babies had died at birth and their bodies cremated, when in actuality they’d been handed over to Tann for sale. Other mothers signed away their newborns while suffering from the effects of anesthesia. Welfare workers tricked parents into signing legal adoption documents they didn’t understand and dragged others into court to take away their youngest, cutest children. Some children were even snatched from playgrounds and off sidewalks and delivered to Tann to be sold.

It is estimated that Georgia Tann sold more than 5,000 children in the 26 years that she served as head of the Tennessee Children’s Home Society. She did so with impunity due to the cooperation of corrupt judges, like Shelby County Juvenile Court Judge Camille Kelley, who assisted Tann by removing children from their birth parents on charges of neglect, or by defending Tann’s home when someone filed a complaint of wrongdoing. Lawyers and judges on her payroll quashed any lawsuit filed by a parent who’d scraped together enough money to fight for the return of their children. Law enforcement looked the other way. Almost anything was possible thanks to Tann’s most powerful benefactor, Boss Ed H. Crump, a mayor of Memphis and a U.S. Congressman, whose corrupt political machine controlled not only Memphis but much of Tennessee.

Tann falsified the birth certificates of those she placed for adoption and either destroyed or sealed the actual birth records, which allowed her to conceal her illegal activities and command higher prices. She regularly claimed her children were born of intelligent, beautiful, and successful parents of English descent. Many had instead come from prostitutes, convicts, and patients in mental institutions.

Though most of Tann’s children found loving parents and a secure home despite her illegal methods, she was more interested in her bank account than the suitability of those adopting. Several young girls were placed with pedophiles and many boys were placed with farmers and business owners looking for cheap labor. She often placed two and three children with a couple “on trial” so that the adoptive parents could choose the one they liked most and return the others, up to one year after placement. Many were returned long after one year. And for the couples who kept the children and fell behind on their payments, Tann “repossessed” the children. 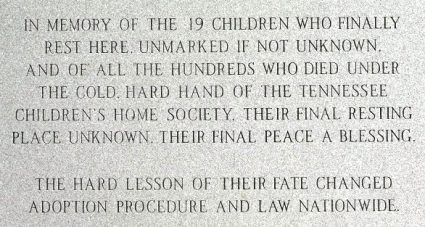 The youngsters who suffered most were those who were not as desirable. Many were drugged and starved by Tann and her employees. Medical treatment was withheld. Several, perhaps hundreds, died from neglect and were buried in unmarked graves without death certificates. It has been reported that Memphis had the highest child mortality rate in the country at one time, much of which was attributed to Tann’s neglect. Even those who were desirable weren’t safe. Many reported later that they had been repeatedly assaulted by Tann and her employees, often strung up by the wrists while punished or sexually molested.

house of horrors and illegal sales. Her wall of protection finally crumbled in 1950. Boss Ed Crump had lost power and Judge Camille Kelley was forced to resign. The governor of Tennessee soon closed the Tennessee Children’s Home Society after ordering an investigation. Just three days before the release of the damning discoveries to the public, however, Georgia Tann died of cancer on September 15, 1950, at the age of fifty-nine, never having to answer for her terrible acts.

No one involved in Tann’s black market adoption ring was ever criminally prosecuted. Worse, no children taken from their birth parents were ever returned—the Tennessee legislature quickly legalized all of Tann’s illegal adoptions.

Read an excerpt of Philip Jett’s true-crime novel The Death of an Heir!