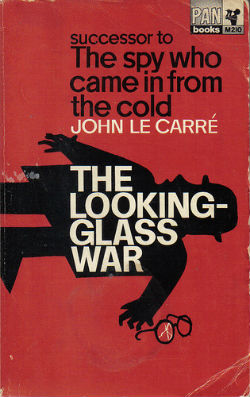 In John Le Carré’s fourth novel, The Looking Glass War, events are definitely skewed. A spy mission has been outsourced to a commercial airline pilot whose assignment is to photograph an area near the West German border where Soviet missiles are allegedly being deployed. Later at the airport’s bar, the pilot fervently confronts the courier, named Taylor, while other patrons listen in on the spectacle of the supposed covert operation in which Russian MIGs had come close to blowing his plane—with a full complement of unsuspecting passengers—out of the sky. Taylor, employed by The Department, gets the film handoff, though soon after he is struck and killed by a vehicle, and the thirty-five millimeter of aerial photos are lost in a snowbank, ending part one of a mission of thorough futility.

Le Carré portrays The Department’s running of undercover agents to be beyond their means and would be better left for their sister spy agency, The Circus, to handle. The Department is painted as an aimless bureaucracy where career employees “bicker gently among themselves about leave, duty rosters and the quality of their official furniture.” Even showing up to inform the deceased man’s family is an exercise in failure when superiors arrive at the wrong time: the wife is not home and they find themselves fumbling for an explanation in the presence of the dead man’s young daughter.

The Department doubles down, sending another agent, Avery, to pose as Taylor’s brother and locate the film. Avery is well intentioned but not much better equipped than his predecessor and incompetently exposes the undertaking to the wider London law enforcement community. Adding insult to injury, The Department’s chief, Leclerc, hampers any chance of success by first asking for assistance and then declining it when aid comes in the form of The Circus’s George Smiley. Leclerc lies to Smiley saying all the events are one big training exercise because Leclerc doesn’t want credit going to his competition. Smiley was front and center for Le Carré’s first two novels, Call for the Dead and A Murder of Quality and had a vital role in the third, The Spy Who Came in From the Cold. That book was a watershed moment in which Le Carré intended to rip the lid off the espionage community by revealing its deep-rooted weaknesses. It had the opposite effect instead making a hero out the world-weary main protagonist, Alec Leamas. The author conveys his regret in the foreword to Glass War that The Spy had, “glamorized the spy business to Kingdom Come.” Le Carré wasn’t taking any chances with the satirical follow-up exposing the apathy and incompetence that makes up the British spy community. Unfortunately by having Smiley involved, it takes us out of the sardonic proceedings a bit too much. Le Carré was shooting for stark contrast between the efficient Circus and the lackluster Department but instead it’s slightly jarring as fictional worlds collide.

Besides the Smiley misstep, there is much to recommend about Glass War and the thriller gains steam in the third act, titled Leiser’s Run. Leiser is a middle-aged, former Department agent who is reactivated not knowing The Department is no longer the all-encompassing heavy-hitter it was during the Second World War. Even more amusing is that he has become the limp organization’s lone operative outfitted with obsolete equipment. Fresh back from his colossal blunder, Avery (who rightly assumes he should have been fired but wasn’t) is recruited to assist Leiser by bringing him up to date on the mission. Before long it’s quite apparent that both men are on a fool’s mission. But to what end?

The Looking Glass War is a somewhat forgotten addition in the Smiley canon chiefly because it suffered from timing. After The Spy, readers wanted more of the same old cloak and dagger, not mockery. And since it wasn’t outright absurdist comedy (after all, this was the age of In Like Flint and the Matt Helm films) it was unceremoniously filed away to  Le Carré minor. Still, Le Carré’s adroit handling of cutting dialogue and a topical plot, even for today’s world with modern headlines testifying to government agencies that haven’t changed one iota since 1965, The Looking Glass War continues to improve with age.

Note: Frank Pierson made a film in 1969, starring Christopher Jones as Leiser and a young Anthony Hopkins as Avery.