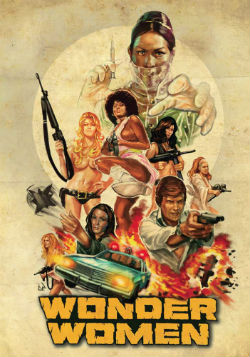 This post can be seen as the third in a trilogy of appreciations I’ve written of B-movies that involve packs of women employing bizarre, world-beating (they hope) masterplans. First there was Invasion of the Bee Girls, about some ladies who lure men into sexual encounters then turn into buzzing creatures during the act and leave the fellas dead. Then I covered The Female Bunch, the story of some pissed-off babes who are fed up with the male population and construct a female-run ranch commune that doubles as a drug-smuggling headquarters. And now I’m here to discuss the 1973 grindhouse cult romp Wonder Women, in which, again, some ladies set up a self-contained world wherein they carry out odd operations.

The plot of Wonder Women is loopy, as is true of many exploitation films from this era. But, here, I’ll have a go at summarizing its storyline: 14 prized athletes from around the world suddenly disappear, over a short span of time. The general assumption is that they were kidnapped, but nobody comes forward to claim the adductions or demand ransom. Hmm. It turns out the guys have been put into comatose states and shipped to an island retreat in the Philippines, this center run by a Dr. Tsu: a disgraced lady physician turned mad scientist (“100 years ahead of her time”), played by exotic beauty Nancy Kwan. What Tsu’s up to at her freaky complex is – with the help of a bevy of go-go boots-wearing, machine gun-toting honeys – managing an organ transplant clinic. She takes vital parts out of one captive’s body and puts them in somebody else’s. Sometimes she executes these operations just as experimental play, to see what will happen if you, say, swap brains between two people. But mostly she’s after money. She lures in rich clients who will pay to trade vital parts with more fit persons; thus, the need for super-bodied athletes. So, for instance, there’s one wealthy old geezer who’s going to pay Tsu mad bucks to have his brain inserted into the body of a jai alai player Tsu and her girls have captured.

Lloyd’s of London, who has a financial interest in the jai alai star, starts to get some clues about where he’s been taken. They hire the services of virile, square-jawed former CIA agent Mike Harber (played by Ross Hagen), who happens to be in Manila and who is willing to try and track down the athlete in exchange for a heavy payday. It doesn’t take Harber long to zero in on Tsu’s institute, and likewise the mad lady doctor and her henchwomen are fully aware of Harber and his investigations into their sinister doings. A chess match ensues, wherein Harber seeks to save the jai alai player and generally break up Tsu’s organization, and Tsu and her girls seek to lead Harber to his demise.

Ok, so that’s what the tale’s about. But I don’t suspect that many who watch this movie are really in it for the story. It’s the pure 70s camp features that make this film a giggle-inducing source of wonder for the B-movie enthusiast. There’s staples from the decade, such as outrageously wide shirt collars, unconvincing martial arts maneuvers, oversize computing equipment, funky disco music (I need the soundtrack, desperately) and such. Other aspects of the movie likely to delight people who enjoy this kind of cinematic orgy include car and foot chases, cockfights, psychedelic colored lights, and laughably grave conversational tones spoken by outlandish characters involved in ludicrous doings.

And, speaking of characters, the side players are much of what makes this film the B-grade funfest that it is. Kwan and Hagen are both convincing in their lead roles but there’s also colorful, minor dramatis personae. Tsu’s financial advisor, who’s portrayed by cult film hall of famer Sid Haig, appears to be constantly on the verge of losing control of himself and bursting into hearty laughter. There’s a fun-loving, streetwise taxi driver who becomes Harber’s personal chauffeur and who drives a festive vehicle that looks like it belongs in a Mardi Gras parade. Tsu’s assistants – some of them recognizable from their roles in other cult films of the period – add some requisite eye candy and sling one-line zingers all over the shop. There’s “Won Ton Charlie,” there’s an American hippie who sits around outside and plays at being blind but whose vision suddenly improves if someone offers him cash to report on an incident he witnessed . . . Also, there’s just the scenery itself, much of it shot on location in Manila, which has a duality of being both exotic and sleazy. One of they key scenes in the film has Tsu and Harber engaging in one of the doctor’s favorite pastimes: brain sex. This segment alone makes Wonder Women a cult movie standout. You see, Tsu likes to get off just like anyone else, but in keeping with her forward-thinking worldview, she’s had it with the emotional baggage involved in romantic ties. Having intercourse with another person without the two of you ever actually touching each other’s bodies is, as she sees it, a sure way to avoid those messy personal entanglements. So she has devised this wild instrument via which two partners can strap on headsets and plug into a virtual sex machine which enables them to experience that kind of pleasure together while sitting on two separate parts of a plush red couch. It’s a delightfully foolish sequence that invites rewinds from the appreciator of camp fare.

Directed by Robert Vincent O’Neill (Jailbait,  Avenging Angel) who also adapted the screenplay by Lou Whitehill,  Wonder Women is a rollicking B-movie and a perfect example of 1970s grindhouse cinema.