Before we get into the finale, I want to spend some time appreciating the phenomenon that is Game of Thrones.

I don’t think it’s hyperbole to say it changed my life. I’ve built friendships around it… And drinking games. I’ve spent countless hours discussing theories and what-ifs. And I’ve been lucky enough to share my thoughts (and bad jokes) each week with my readers. So thank you. Thank you for letting me drone on about the history of Old Valyria, the minutiae of King’s Landing politics, and the absurdity of the Sand Snakes. There are very few things that seem to connect people from all walks of life—especially these days—but Thrones was the rare unifier. Sundays are going to feel empty for a while, but I hope something comes along soon to fill our connected void.

Full disclosure: I’m not going to end things with a negative review. Thrones has been too important a part of my life for me to not celebrate its end. Could these past few seasons have been better? Undoubtedly. But the finale was great—a worthy period at the end of a very, very long sentence. It didn’t go exactly how I hoped, but it went in a direction I never even considered, and isn’t that what Thrones is all about?

Okay, let’s get into it. For the very last time, ladies and gentlemen, your risers and fallers.

Riser of the Week: Bran Stark

You’ll never walk again, but you will fly.

And look how high he’ll soar.

I won’t lie, I’ve never been a huge fan of Bran. I found his chapters repetitive and a bit boring, and as someone who hates (hates!) reading about a character’s dreams, Bran really can be my worst nightmare at times. But I can’t deny that he’s worthy. As Tyrion said, “people love a great story” and there’s no denying Bran makes for one. From surviving the initial fall from Winterfell’s tower, to venturing north of the wall, and then becoming the Three-Eyed Raven, Bran’s journey has been every bit as crazy as Arya’s, but we hardly give him the same respect. I will now. For he is Bran the Broken, first of his name, and you better put some damn respect on it.

I only wish Hodor was still around to see his best friend now.

Honorable Mention: Bronn. We’ll save the discussion of whether he’s qualified to be the Master of Coin for another day and instead simply applaud the man who rose further than any single other character in the show. This is your new Littlefinger.

If you’ve been following my articles for the past few years, you’ll know I’ve never been a fan of Daenerys. Somewhere between Qaarth, Astapor, and Meereen I simply lost interest. My curiosities resided where Daenerys did not—Westeros. By the time she finally arrived at Dragonstone, I was over it all. As it became clearer and clearer that Daenerys was destined for madness, I sighed with great relief. I never wanted her as my queen, and now it was likely that someone—probably Jon—was going to make sure she paid for her war crimes.

And that’s exactly how the finale unfolded, and yet the strangest thing happened. I felt bad for Daenerys. Not only was I sad that she died, I found myself wishing that she didn’t. I’m not proud of how I felt at that moment—far from it, to be honest. Yet here I stand.

Dany should not have burned King’s Landing—we can all agree on that. But I can understand why she did it. For years now, she’s had to fight, claw, and kill her way through her enemies, and even one brief break from pure ruthlessness would have spelled certain defeat. So she made sure she was the most ruthless person in the room. In every room. Until the Throne Room. The things we do for love…

Cersei didn’t care if the smallfolk of King’s Landing died—Daenerys did. It doesn’t give her a pass, but it does show that she wasn’t “mad.” She was ruthless. War breeds death and Dany understood that. She also was betting on herself—betting that taking King’s Landing as she did would save more lives in the long run because she would prove a worthy and just ruler at the end of the day. We just never got to see if she was right. 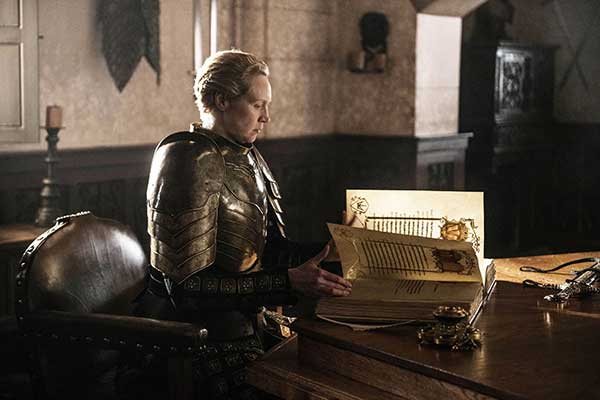 Item of Power: The White Book of the Kingsguard

Perhaps the most powerful moment in the entire episode was Brienne’s touching tribute to Jaime Lannister in solidifying Jaime’s long, complicated legacy. Jaime Lannister is one of the greatest fictional characters ever created. His decision to kill the Mad King saved countless lives, and yet he was vilified for it, and as a result, he turned into a calloused person who closed himself off to the rest of the world. When people hate you, it’s hard to understand why you even bothered saving them. So even though he started out as a clear villain, he was also deserving of praise. Watching Brienne make sure that future generations of knights would know his valor was a clear highlight of this season. That was the ending Jaime Lannister deserved.

I’ve been sitting here trying to figure out how to end this, scared that once I’m done writing, Thrones will officially be over. But it will never be gone. What we’ve just gone through—for nearly 10 years!—will always live on. We’ll always remember where we were when Eddard Stark lost his head, or when the Lannisters sent their regards, or when Arya saved the world. We no longer need to theorize who will sit on the throne, but we can certainly try to guess who will come next. Or who Sansa will marry. Or whether or not they’ll add some swords to be back of Bran’s wheelchair.

So I hope you all leave here today not sad that it’s over or mad that we didn’t get more episodes, but happy and excited—happy for the time we had in Westeros and excited for what’s still to come. This watch may have ended, but there will be more to come.