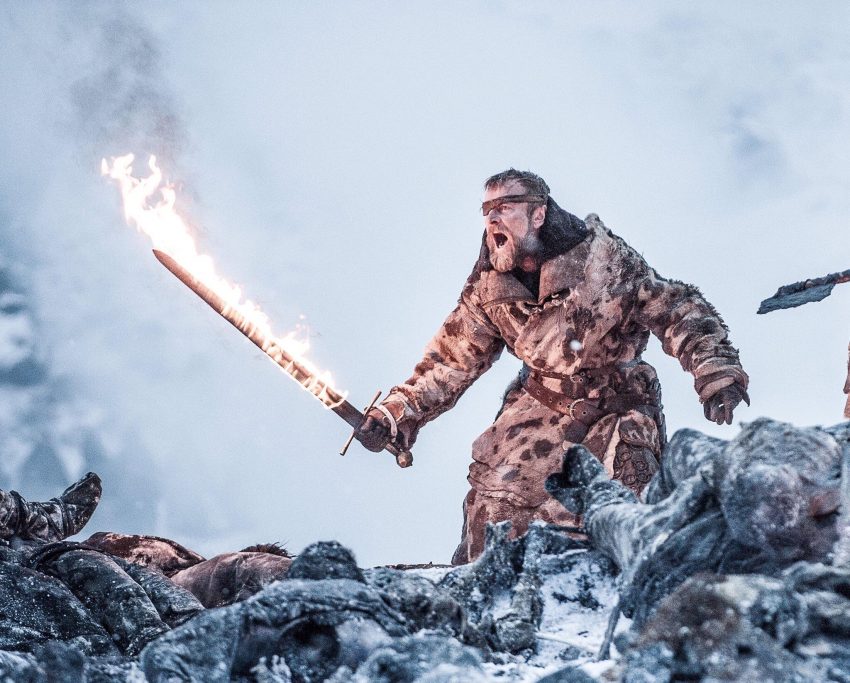 Like Jaime Lannister, “Beyond the Wall” was equal parts good and bad. And that has been the unifying theme of Season 7: good and bad. For every Drogon incinerating the Lannister army scene, we get a eunuch sex scene. For every Arya avengement, we get an Arya bafflement. With every Queen of Thorns mic drop comes a plotline ball drop.

So sure, it’s easy to question the showrunners – David Benioff and Dan Weiss – and ask why it was a good idea to have seven men take on the army of the dead just on the off chance of capturing a wight so they can convince the honorable Cersei Lannister to pause her fight for the throne and help out in defeating the White Walkers. But it’s not exactly fair to Benioff and Weiss. For six seasons they’ve had their hands held by George R. R. Martin and his brilliant source material. But now they’re on their own, with only the general destination in mind. So while it’s not perfect, be glad that we have it at all, because if it were up to Martin, we might never get to see how this story unfolds. And if you’re going to blame anyone, blame Martin. It’s his fault we’re not getting to experience his version.

Riser of the Week: The Night King

Forget the prince – the Night King is the villain who was promised. It had been too long since “Hardhome,” and we desperately needed a reminder of just how powerful the Night King is. With an entire ice-zombie army at his disposal, including some terrifying giant bears, the Night King was already a heavy favorite in the Great War to Come™. And now he has a motherfuckin’ ice dragon. How soon until we see Viserion perched atop the Wall? Could that be this season’s closing shot?

Also, I now firmly believe that the Night King has the gift of vision, similar to Bran. The only explanation for why the Night King didn’t kill Jon and company earlier was because he wanted a dragon, perhaps to take down the Wall. A lot of people have grown upset at how slowly the White Walkers have traveled south since “Hardhome” but it’s now looking like it was all a part of the Night King’s plan to guarantee a dragon traveled north of the Wall. The Night King even knew exactly where last night’s battle would go down, as the location of the fight was the exact same spot he was at when Bran saw him in his vision a few episodes ago.

Daenerys’s status as this week’s faller is due solely to the fact that she lost one of her dragons. What’s even worse is that it’s now fighting for the other team, and she doesn’t even know it. That’s going to be a tough pill to swallow, and if the Night King’s smart, he’ll wait to unleash his dragon until Daenerys is flying atop Drogon.

Other than losing a dragon, Daenerys was actually pretty awesome this episode. She answered Jon’s plea for help immediately and put herself and her plans at risk to better the realm. She also rocked the hell out of her winter coat – and not a moment too soon, because if last night’s googly eyes were any indication, I’d say she can expect five or six inches of Snow sometime soon.

Honorable Mention: Thoros, for dying as he lived—soaked in alcohol.

Backstory of the Week: Thoros and Jorah Storm Pyke

Early in the episode, Jorah and Thoros reminisce about an old battle they fought together. It was a quick conversation, but one I was glad to see happen. By now, it’s common knowledge that the Greyjoys are all pieces of wet shit.

Eight years after Robert Baratheon won the throne away from the Targaryens, Balon Greyjoy rebelled and crowned himself King of the Iron Islands. This did not sit well with Robert, and he rained down hell upon the Greyjoys. The Greyjoy fleet was destroyed by Stannis Baratheon while King Robert and Ned Stark laid siege to Pyke. During the final assault on Pyke, Thoros was the first man through the breached wall, flaming sword in hand. And Jorah Mormont was right behind him. Both fought bravely, and Robert knighted Jorah after the battle. After Balon was defeated and forced to surrender, he was permitted to keep his lordship and titles under one condition: that his only remaining son, Theon, be made a ward of House Stark as hostage for his good behavior.

Now, none of these events directly influenced last night’s episode, but it’s a fun piece of Westerosi history that was hinted at in an episode that otherwise lacked it.

These ice javelins provide further proof that the Night King knew exactly what he was doing. Before this episode, we hadn’t seen the White Walkers use this type of weapon, but with a dragon incoming, things had to change. They were ready for the takedown, and he didn’t miss his shot.