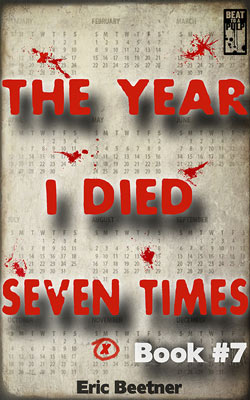 The Year I Died Seven Times by Eric Beetner is a 7-part serialized novel about Ridley Allen, who'll be punished by stubborn love, gnawing curiosity, and a perverse knack for survival after his Japanese girlfriend disappears (Book #7, the final installment, is available November 4, 2014).

Being a fan of short fiction as I am, also of series characters and episodic TV, I'm always excited to see people playing with serials. I'm happy to report this one is a blast, and not least of all because our hero really does die seven times. If you look closely at the title's cover, you'll see blood splotches on the calendar that forms the background. Each splotch marks a month in which an installment (and one of Ridley's deaths) occurs. This is no spoiler. From the scene that kicks off Book #1:

Had to be no more than fifteen seconds and the entire trunk filled, which meant the whole car had gone under. When the last of the air belched out from the seams where the trunk lid met the bodywork, I felt the car get sucked down like some sea monster has a hold of it or something. All I know is I picked up speed in a race to the bottom. I don't remember the moment when I blacked out or anything. I was too stunned and numb from the cold and a little dizzy from the whole lack of breathing thing. I couldn't believe it.

Believe it, reader, he's really dying, and that's where all the fun begins!

Since his parents both passed away, Ridley hasn't been doing much. His dad was beyond tight-lipped about his high-level job, which means there's a huge and complicated part of his father Ridley can't know. His mother died of cancer soon after his dad. There's plenty of “settlement money, life insurance, a pension payout,” but Ridley hasn't touched any of it, unwilling to deal with all the emotional baggage. In the meantime, after dropping out of his dad's alma mater, he's managed an inexpensive life of cheap ambition by getting himself hurt in a dumb construction accident. For the last several years, he's been on disability he doesn't really need, renting out his medical marijuana card to a stoner pal and dealer, CJ, also selling off his Vicodin so he can couch-surf and exist on takeout.

If you're eating cold Chinese food for breakfast, as I often did, it implies several things. One—the night before you were too lazy or unmotivated to make food for yourself. Two—it implies the morning after you were equally lazy and unmotivated. Three—it also says you were too indifferent to even warm up leftover chicken with snow peas. You just don't care anymore.

But that's Ridley's existence before Miho Tsukiji, a Japanese girl working on a visa, who he comes to love quickly and dangerously deeply. Maybe the void of any other purpose in his life makes her presence that much more important, and when she suddenly says goodbye and disappears from L.A. without preamble, a terrible need to understand haunts him. In fact, it will kill him. Again and again.

As Ridley looks into Miho's increasingly sketchy situation, I began looking forward to the unfolding of new methods by which he might die. (Oh no, you won't get the same play called twice, sports fans.) His resurrections aren't woo-woo, they're the result of things like CPR and adrenaline, lots of medical intervention, and a heart that doesn't seem to want to give up, despite what it's being put through. Another interesting aspect of the character is that he isn't so much driven by revenge or fiery anger, but resolve. Something of a chip off the old block, as we'll learn. Ridley acquires a stony, almost scary determination to see his questions answered, even as he and people around him, like the hapless CJ, whose main skills are rolling joints and Call of Duty, wonder why he won't—or can't—stop. His repeated visits to the “undiscovered country” (meaning death, not Star Trek VI) only set him farther apart from normalcy. At one point in Book #4, he tries reaching out for fellowship:

They met in the community room of a Presbyterian church. It was exactly as I expected. Folding chairs, a plate of Oreos and coffee in the corner…

“I was gone for ninety-nine seconds,” she said. “The doctors said if I made it to a hundred, I'd be dead.”

The others applauded, but I knew she was full of shit. No doctor told her any such thing, she embellished the truth to make it a better story for the group. I bet she practiced at home in a mirror. Probably with a Marlboro dangling from her lips…

I scanned the five eager faces, some slowly nodding with fake empathy. Fine, I thought, you want a story? I got a story.

This will not turn out to be a successful theraputic approach. Ridley will gain at least a working ease with his own strange penchant for survival, but he wants to be one of the good guys, so killing other people is another dilemma he'll have to confront before all is done.

While The Year I Died Seven Times is grounded in gritty realities of terrible circumstances, of awful acts and the kinds of people who do them, it also offers plenty of surreal moments and weird characters that provide absurd humor, like in a Victor Gischler novel or a Guy Ritchie film. Following his scant leads and quixotic goal, Ridley will bounce between coasts, from L.A. to New York City and back again. Never gleeful while dealing or receiving damage, he's wry and funny nonethless, as caught up in the oddity of his situation as I was. The installments fly by, about 40-50-ish pages apiece, and with the whole serial now complete, new readers won't have to suffer while waiting for the next.

Something else I particularly liked, but which is in keeping with a realistic approach, is that Ridley will not (mild spoiler) suddenly emerge as a martial arts master or unlock some near-magical cyberwizardry stored in his brain. In his character, there are shades of Kill Bill's unconquerable Bride, or, closer still, Colin Farrell's surprised and drunken screenwriter Marty in Seven Psychopaths. But unlike them, Ridley hasn't ever been a great fighter or a profound thinker. He'll go through this whole sordid debacle with only marginally improving skills and information, purchased at high cost to his health. As he doggedly persists, he will learn more about his true capacities, also about his love and the (under)world they share. And yet, he'll still fling himself against a brick wall if it's the only idea he has left. Both dumb luck and lousy breaks will apply. Losses and scars will accumulate. Maybe it makes me a ghoul, but I'm always pleased when the blood on floors is actually slippery, if you know what I mean. It keeps action more exciting and entertaining when, besides bad-assery, physics remains at work.

If you don't mind the occasional gore, creeps, sickos, and broken furniture, The Year I Died Seven Times by Eric Beetner is a really fun ride. By Book #7, I had to know whether the cussed-stubborn Ridley would uncover the truth before his seventh death. whether he'd be granted another resuscutation, or if, at last, he'd finally reach The End.

Clare Toohey is a literary omnivore who wants a taste from your plate. Aside from editing The Malfeasance Occasional and site wrangling here, she's a freelance editor who's written short and surreal crime stories, blogs at Women of Mystery, and tweets @clare2e