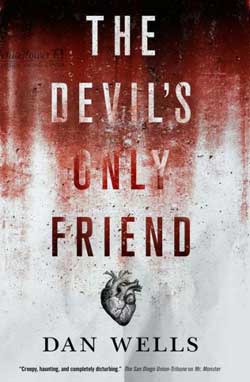 The Devil's Only Friend by Dan Wells is the 4th paranormal thriller featuring a teenaged sociopath who fights demons for the government (available June 16, 2015).

John Wayne Cleaver is a teenaged sociopath. A fact he's pretty open about. He also has a driving urge to kill, which is why it's a good thing he lives by a set of self-imposed rules. Rules that include: keeping away from animals, eating a strictly vegetarian diet, and never touching a gun.

And it's also a good thing that he's found a way to channel his murderous impulses; it seems the government is in need of someone with John's particular proclivities and mindset, because it turns out there are worse things than serial killers in the world.

Or, as John and his team call them, the Withered. They've existed for thousands of years, hiding in plain sight. But John and his team are on to them, and know how to uncover their fatal flaws and take out these otherworldly threats. When you're up against murderous demons, it's not such a bad idea to have a potential serial killer on your side.

…But I'm good now. I promise. I've killed, and whatever bloodlust I used to have is sated. I wake up in the morning and I go to my tutor and I go to my counseling and I go to my job with the FBI, helping to track down other killers, and I say the right things and I do the right things, and nobody's afraid of me and everything is good. I watch travel shows. I cook. I do logic puzzles to keep myself occupied. And then sometimes at night I go to the butcher shop and I buy the biggest roast they have and I bring it home and I cover the room in plastic and I hack the meat to pieces with a kitchen knife, slashing and ripping and chopping and grunting, until there's nothing left but scraps. Then I roll up the plastic, meat and blood and all, and I throw it away and everything is clean and calm again.

The “plucky team versus an otherworldly threat” plot has been done before, but this novel has two strengths that distinguish it from the crowd. The first being the serial-killer-turned-demon-hunter protagonist and the second being the Withered themselves.

While some act like demons we've seen before in fiction, possessing humans or manipulating them to their will, others have their own outwardly normal bodies. Some are physically monstrous or beguilingly gorgeous; others are nondescript and as average as anyone you'd pass in the grocery store.

There's no one quality the Withered share beyond their near-immortal lifespans and their capability for destruction. As John stresses throughout the novel, each of the Withered is 'missing' something. In order to become what they are, they first had to give something up.

“There was a ritual, I guess,” he said. “I don't remember the details, but I suppose that's to be expected. We had to give something up — something deep, some part of ourselves that defined who we were. It was a way of giving up our humanity, I guess, so we could move on to something bigger, but that might be my own opinion on it, after the fact. It's hard to separate my original motives from the ten thousand years I've had to reconsider it. Giving it up was a freedom, Rack said — the only thing we were losing were the limits that held us back…”

Their violent acts are motivated by their need to fill this hole: some require health, others youth or beauty; some need their victims' memories to stay sane, while others are more than happy to swallow hearts whole.

It's an interesting take on the concept of “demon,” and pits the team against a variety of threats. While the Withered can all be taken out with a swift decapitation, some are easier to put down than others. It's hard enough to take on a murderer when all they have is a gun or a knife; the Withered can attack you with disease or shift their forms into things with claws or spikes.

John and his crew have to research and plan before they can act, and there's a lot of philosophizing on the nature of good vs. evil, nature vs. nurture, especially when John starts to wonder if he doesn't share more in common with the Withered than with the humans he's working with.

As the narrator, John is our guide and hero — though perhaps antihero would be a more apt moniker. Given his sociopathic nature, it makes sense that the world we see through him is detached and relatively devoid of powerful emotion. People die, sometimes terribly, but it all happens to someone else and therefore deserves only a passing acknowledgement of events.

But this also means that sometimes startling, violent, tragic events breeze past us so quickly we barely have time to register they've happened before we're hit with the next event. Dan Wells writes in a very fast-paced manner, which means the story rolls along quickly, but sometimes at the cost of his audience's engagement and connection.

There were several times when I had to pause and go back to re-read a paragraph or page because I had missed a single sentence that was vital to the plot. People on John's team die, and there's barely a moment to acknowledge their death before we're up and running again. The quick shifting from one moment to the next can be jarring enough to throw you out of the flow of the story. This also means there isn't a lot of time to build up or foreshadow; a scene can be tense, but we're never left on the edge of our seat for long.

With the nature of the villains, it would have been easy to really play up the horror aspect of the story. Wells opts instead for a more straightforward cat and mouse thriller, pitting John against the king of the Withered. But the king doesn't come into play into nearly halfway through the story, somewhat undermining his importance. We first see several other Withered disposed of; and while those confrontations help set the stage and build up the characters, they feel a little superfluous by the time the Big Bad appears. This almost reads as a series of vignettes rather than a fully connected novel.

All of that said, The Devil's Only Friend is still a story with a lot of solid moments, an interesting premise, and a pretty unique narrator. John tells us constantly that he doesn't have the capability to make lasting connections to people — that he groups everyone into either the “potential threat” or “potential prey” categories, and knows exactly how to kill (almost) everyone he's ever met — and yet the most interesting moments in the book circle around two of his relationships: one of the Withered and a girl named Brooke.

Brooke was once John's neighbor, but after an encounter with a Withered, she's become the team's font of information. They managed to “exorcise” the demon, see, but in the aftermath Brooke still has all of 'Nobody's' memories, which makes her vital to John's work.

'Possessed' wasn't really the right word for what had happened, but it was close; possession implies a spirit or a ghost, but Brooke was taken over by a physical entity  — a monster made of ash and grease, a black sludge that, in her more lucid moments, Brooke called 'soulstuff'. The demon known as Nobody was made of it and crawled into her bloodstream and moved her like a puppet. I suppose the best word would be to say that Brooke was 'invaded', but honestly, when you're talking about a bodily invasion and using words like 'best', things are pretty screwed up and you might as well not talk about them at all. But that's life in the demon-hunting business, I guess.

The fact that John feels conflicted about Brooke — who was once his neighbor, who he once fantasized about killing, and who now is mentally ill from her trauma and being used by the FBI — adds an interesting dimension. Perhaps even sociopathy has shades of grey, and John isn't quite as monstrous as he believes. Her tragic background also makes Brooke one of the most colorful characters; with thousands of years of memory to choose from, Wells has her alternate between cryptic, creepy, and childlike to eloquent and philosophical.

Ultimately, The Devil's Only Friend is about a lot of broken people. Some are mentally ill; some are demons. And some only feel alive around violence — only know how to live by killing. There's plenty of meaty stuff here to chew on.