The Absent One by Jussi Adler-Olsen is the second in the Danish “Department Q” cold case mystery series (available August 21, 2012).

Detective Carl Mørck is satisfied with the notion of picking up long-cold leads as head of Department Q, Denmark’s cold case squad. So he’s naturally intrigued when a closed case lands on his desk: A brother and sister were brutally murdered two decades earlier, and one of the suspects—a member of a group of privileged boarding-school students—confessed and was convicted.

The question at first, of course, is who placed the case file on his desk, and then the why follows. But do these questions really matter? The case is closed, so why bother? Unless (and this is exactly when things start to get interesting) there was more than one  man involved in the case, and the man who took the blame was paid to do so.

Mørck, truth be told, is not so eager to investigate this case. Not too long ago he found himself in the epicenter of a painful investigation that brought his Department Q some fame, and just before that he was involved in an incident during which one of his partners was killed, while another one came out of the ordeal almost completely paralyzed. He carries, one would dare say, a lot of dead weight on his shoulders, and what he doesn’t really need right now is to add to it by working on a case like this.

However, Mørck is who Mørck is: a figure who has issues with authority, who doesn’t really follow protocol unless he’s explicitly ordered to do so, and who just likes to do what he’s told not to. Thus he starts paying real attention to the case when they tell him to let it go.

When Carl was a boy, his father had been on to him. He gave Carl explicit orders not to plough the meadow, so Carl ploughed it. He admonished Carl not to join the military, and Carl enlisted. His crafty father had even tried to stir him towards the lasses. This farmer’s daughter and that farmer’s daughter weren’t good enough, so Carl went after them. That was Carl’s way, and always had been. No one was going to make his decisions for him, which actually made him easy to manipulate. He knew this, of course. The question was whether or not the police chief also knew it. It was hard to imagine.

Getting people mad at him seems to be his favorite pastime, so there are not an awful lot of people who really like him. He’s doing fine with Assad, his idiosyncratic assistant, who half the time just does whatever he seems to think proper instead of following orders, his tenant Morten and his stepson Jesper, and the police force’s psychologist Mona Ibsen, with whom he wants to date and not freaking consult.

How could such a man properly perform in a workplace where cooperation is the keyword? Not easily, apparently, and that’s exactly the reason that he was demoted/promoted to Department Q. While there he doesn’t have to interact with many people and that suits everyone fine.

In Adler-Olsen’s previous novel, the excellent The Keeper of Lost Causes, in which the reader comes face to face with Mørck for the first time, he only had to spend time with Assad in his lonely basement office. But, the success of the case he handled back then put him in the spotlight. So, the police chief decided to enrich his team with the addition of Rose, an officer with lots of wit but attitude problems, who was chased out of her previous post. With her arrival tempers seem to rise, and since Carl is by nature like a walking, breathing ticking bomb, things sooner or later are bound to explode.

However, Rose doesn’t only bring trouble into his office, but also a fresh breath of air. She knows things, she’s quite good at her job, and she can even predict what he’s going to ask her to do next. So Carl, even though he doesn’t dare admit it, soon comes to realize that he needs her. He still wants her out, of course, but at the same time, he can do nothing but admire her work ethic. If only, she wasn’t so nosy.

In the meantime, in the world of the villains, some interesting things take place. To begin with the former school gang and life-long best friends, start losing their confidence about keeping their secrets buried in the sands of time. They are rich and famous, they are more than powerful, they can do whatever they want. However, an old friend of theirs comes out of the blue to unsettle their blissful lives. She knows everything about them, all their crimes and all their lies, and she can definitely destroy them if they let her. They have to find her and silence her once and for all. But she’s too clever, and too sly, and she’s determined more than ever to turn their dream lives into a living nightmare. So the past and the present at some point will come together and the end result will prove just as surprising and explosive as the plot that preceded it.

The author draws very detailed portraits of his characters. Reading through the pages the readers come to know how each and every one of these people became what he or she is today. Some of them are haunted by the past, a few live charmed lives, the members of the gang know that “this painful, shared hatred of their fathers had united them,” and Carl, despite his harshness and his difficulty expressing his feelings is, at the end of the day, a humanist misanthrope. He may be a loner and persistently antisocial, but he also cares deeply about some people, and empathizes more often than not with the victims’ misfortunes.

It couldn’t have been colder in this house that it felt now. Everything in it was saturated with the tragedy of the past. Who was even left from that time? An old woman who would soon die of a tumor in her brain, that was about it.

He focused on the panel doors leading to the bedrooms. Father, mother and child we see. Count them quickly: one, two, three. He peeked into each room, one after the other . . . In these bedrooms, beneath the sheets, the future seemed bright and infinite. And in the living room behind him, that future had been brutally torn from them. Which meant that he was standing on the very axis upon which life revolved.

The threshold where hope had met reality.

I thought that The Keeper of Lost Causes was one of the best crime novels I’ve ever read, but I truly believe that Adler-Olsen has somehow managed with The Absent One to improve on that remarkable feat. This is a book that takes a deep and detailed look into the darkness that, from time immemorial, lurks in the hearts of men.

Every Wednesday, we here at Criminal Element will put together a list of Staff Picks of the books that published the day before—sharing the ones that we are looking forward to reading the most! A new Sophie Hannah and Nelson DeMille highlight an awesome week of books! See what else we're reading: 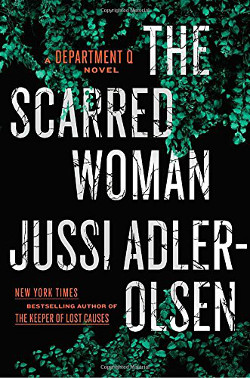 The Scarred Woman by Jussi Adler-Olsen is the seventh book in the Department Q series. Carl Mørck, the crotchety-but-very-skilled homicide detective whose Copenhagen-based Department Q is relegated to the basement, is back in the seventh installment of Adler-Olsen’s unusual series. I’ll admit, when I read the first book, The Keeper of Lost Causes, I wasn’t…