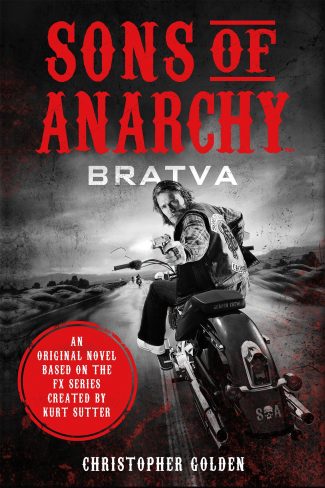 Sons of Anarchy: Bratva by Christopher Golden is an original novel set in the television world created by Kurt Sutter about a California motorcycle gang.

Hold on to your seats, as you are in for a rollercoaster ride not for the faint-hearted. If you like your books gentle, thoughtful, and covering esoteric topics like how to knit your own yoghurt, then this, most definitely, is not for you. Some people in this world are just not the type who send lawyers’ letters when you have a falling out with them.

SAMCRO, Sons of Anarchy Motorcycle Club Redwood Original, doesn’t believe in lawyer letters, as you may have guessed, as all hell breaks loose at the end of a Glock in Sons of Anarchy: Bratva. (The end you do not want to be looking down.) The other end appears to be in either the hands of the RIRA (Real IRA) or Bratva (the Russian Mafia).

Real IRA? An offshoot of the Irish Republican Army. I am saying no more. I don’t want to wake up one night and hear “What’s a lawyer’s letter?” in a Celtic accent. Christopher Golden and Kurt Sutter are either very brave or extremely ill-informed, to even make mention of this group in a book, regardless of the fact it is a fictional story. Bravery (which I suspect it is) aside, the bullets fly as the pages unfold taking us into the world of SAMCRO’s Vice President Jax Teller and his biker buddy, Opie Wilson. It is all Harleys, oil, the Mexican cartel, guns, drugs, and sex. The rock and roll starts very early.

Opie floored it, the truck jumping forward with a roar. The gap separating them from the Humvee opened up for a second or two, and then the monstrous black vehicle began closing again. Jax tightened his grip on the Glock and glanced to the left, across the two lane road and the span of grass and trees and scrub that separated it from Highway 99.

A hundred yards ahead, the ground between the side road and the highway flattened out, and old, worn tracks showed that others had driven across it in the past. A white box truck rumbled toward them from the other direction.

“Right after the truck,” Opie said. “Hang onto something.”

Jax watched the box truck coming along the two-lane road, counting seconds in his head. The Humvee’s engine roared, and it bumped the pickup. Opie and Jax jerked in their seats, rattled by the impact.

“Guess the rules out the feds,” Jax said bracing himself against the dash with his free hand.

Opie didn’t reply, Jaw tight, he watched the box truck, his knuckles white on the steering wheel, ready to swerve left, tap the brakes, and shoot across the open ground between the faded side road and Highway 99.

It all gets very naughty from there on in. Is it the Irish boys, the Russians, the Mexicans or a combination of two or more of them in a cocktail of leather-trousered violence? It doesn’t really matter from the point of view of the story, as it is about SAMCRO overcoming all things fate throws at them and coming out the other side, gun and Harley wheel brace in hand. I shouldn’t really care about any of these characters as they are not really that nice, though they do demonstrate the right amount of loyalty and indignation when they are double-crossed. I shouldn’t care, but I do, as Golden and Sutter do a sound job in making sure the reader is not completely left out in the cold as far as being bothered about what actually happens to these gun and drug dealing Sons of Anarchy. The book, having grabbed me with characters like Clay Morrow, Lennie the Pimp, and Baghead, then takes me to the Russians, as it would appear they have more than a little do with the mayhem unfolding in this West Coast tale.

With the guns on the top step, they descended back towards the Russians. Six steps, seven. Scarface didn’t wait for Jax to reach the eighth step. Jax tried to deflect the punch, but the big bastard’s fist glanced off his jaw hard enough to nearly unhinge it. The metallic taste of blood flooded his mouth. He shuffled sideways, turned and lunged inside Scarface’s reach, hit him with three fast gut punches and  one to the kidneys, but the big man dropped an elbow down on his shoulder, and Jax went to his knees. Wheezing, trying to catch his breath, he fought the blackness at the edges of his vision as pain washed over him.

He heard a chorus of guns cocking, glanced up, and saw that half of them were aimed at Opie and half at him.

If non-stop action is your thing then this is heaven, only don’t be looking for any angels as there aren’t any that I could see, even with dirty faces. When the bullets finally stop flying and the last beating is administered and the dust settles, what is it all about? Irish gunmen, Russian mafia, broken deals, or the Mexican cartel? Read this book and you will find out, as well as enjoy a very entertaining ride along the way. A little bit of it all finds its way into this tale as well as, not surprisingly, the roar of a pack of Harleys coming straight at you.

Listen to a special audiobook excerpt!