Let’s be honest: superheroes work better on paper than they do in the movies. Gorgeous, four-colored comic book splash pages reel you into their imaginary world. In the panels of a comic book, men and women, good and bad, can don often outlandish costumes and make it look very, very cool. That aspect is one of the most important things about comic book heroes, isn’t it? The seeing of the costumes.

Movies do their best to translate what is essentially spandex in the comic to leather or some other material on the silver screen. The Avengers film and Christopher Nolan’s Dark Knight trilogy are but two examples of superheroes and villains done right for the silver screen.

In the prose form, however, superhero fiction often falls short. Over the years, I’ve read anthologies featuring Batman or direct-to-novel stories of the Marvel heroes in the early 1980s, but, when you can’t see the men-in-costumes, something is lost. I think it is an obvious reason why there aren’t many substantial superhero novels out there.

There is one now. Adam Christopher, in his second novel, Seven Wonders, does a remarkable job of crafting exciting prose that not only barrels you along with interesting mysteries, but lets you “see” the action.

The city of San Ventura, California, is fictional, but it is peopled by many of the typical folks you’d expect in a traditional comic book. As the tale opens, The Cowl, super-villain, and his female partner, Blackbird, rule the night and—by extent—much of San Ventura. His powers are a conglomeration of abilities like stealth, healing, and exceptional fighting skill while Blackbird conceals her talents behind her bird mask.  Not to be outdone, the Shining City is watched over by the Seven Wonders, led by Aurora’s Light (an atomic powered man). The other heroes include Bluebell (a psychic), Sand Cat (a supernatural warrior), Linear (a speedster), Hephaestus (an exiled god from Mount Olympus), the Dragon Star (a manipulator of space-time), and SMART (a living robot). Now, it doesn’t take a genius to determine the inspirations Christopher drew from to create his super group, but I shan’t rob you of the pleasure here.

Then there is Tony, the everyman a good story needs, and who, as the story opens, realizes that he is generating his own super powers. And what an opening: Tony finds himself in the middle of bank robbery, perpetrated by the Cowl’s henchmen. When the Cowl shows up, seeking information from the bank manager, the story takes a decidedly more brutal turn than you typically see in comics. The Cowl orders his men to start shooting  the hostages as leverage. Tony makes the decision: try something, anything. He does, and the result surprises both him and the Cowl.

It also surprises the police. Detectives Joe Milano and Samantha Millar are on the bank robbery case—actually were in the bank, undercover—and they, like the Cowl, are puzzled by this sudden appearance of a new super-person and his powers. There’s something in Sam’s background that drives her (part of the fun of the story is to guess what it is) and Joe, being a good partner, helps her, with the tacit approval of their captain. Like the police in Gotham City must feel, the SVPD are constantly irritated that the Seven Wonders all but do their job.

Christopher writes in an exuberant style that has just enough snark to make it fun. Here’s a passage from the early scene during the bank robbery:

The bank manager wasn’t talking. Normally, Tony would have seen him as a proud man, defiant to the end, captain-going-down-with-the-ship kind of loyalty, as if he was watching this on World’s Most Awesome Bank Robbery Shoot-outs 7. He could imagine the manager’s smoking, bullet-ridden body being stretchered out at the end of a day-long siege, with  mugshot and eulogy in Friday morning’s San Ventura Ledger-Leader, with quite possibly a civic funeral the next week complete with police honor guard and respectful mayor in attendance. The mayor would later give one of his all-too-regular press conferences decrying the Cowl and swearing justice would be served, and the citizens of San Ventura would shake their heads and turn off their televisions and lament the dark times that had fallen on the Shining City.

But right now, the bank manager was just being a dick.

Christopher structures his chapters in an interesting fashion. Each chapter opens with a brief—sometimes one sentence, sometimes one paragraph—“introduction,” for lack of a better word. These set the scene for the coming chapter, letting the reader know which character will be the main point of view. Additionally, these intros serve as a brief info dump for the reader in a way that is not intrusive. As the novel went on, I started to look forward to them more and more.

And, for readers really steeped in comic book lore, both on screen and in the pages of a comic, Christopher throws in little nuggets that, perhaps, only the most dedicated fans will get: “Oh, don’t make me laugh. You won’t like me when I laugh.” (Bonus points if you get this line.)

When the summer started, there were two tent pole franchises at the theaters that just about everyone was going to watch and enjoy. If you’ve seen The Avengers and The Dark Knight Rises and are still clamoring for more superhero action and intrigue, you can safely add Adam Christopher’s Seven Wonders to your list.

Read all posts by Scott D. Parker for Criminal Element. 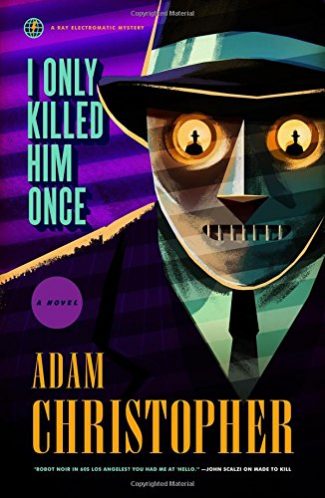