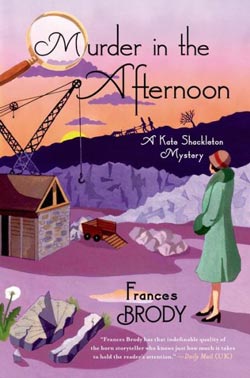 Murder in the Afternoon by Frances Brody is the third in the series about Kate Shackleton, a woman whose husband went missing—presumed dead—in WWI, and who will investigate one of the local quarry's stone masons whose dead body has disappeared (available February 11, 2014).

Kate Shackleton is a keeper. It took me about two chapters to know that she was someone I wanted to spend time with.

This is the third book in the series, which is set in the British countryside after the Great War. The story evoked a lost time and place and introduced me to a large, but well-drawn, cast of characters, none more interesting than Kate, an understated and wholly involving detective.

Kate is a war widow, though she’s not quite ready to accept that fate since her husband’s body was never identified. The daughter of a police inspector, Kate earns her living as an investigator, usually in insurance matters. But the case that arrives at her doorstep early one morning in the form of a strange woman becomes something far more. The woman, who claims a hidden family connection to Kate, demands help in finding her missing and possibly murdered husband.

This begins a story that’s as personal journey for as an investigation.  Clearly, I’ve missed some character development by being unfamiliar with the earlier novels in Frances Brody's series but I never felt lost, even with the abundant cast, who were a fascinating mix, from Kate’s able assistant, former policeman Jim Sykes, to her client’s family, and the residents of the village where the missing man lived. I particularly loved the insights into how their lives were changing with the times, especially among the workers at the stone quarry.

Even though this eventually becomes a murder mystery and a search for clues to the victims’ demise, the story is really driven by the undercurrents among the village residents and the murdered man, and between Kate and her various family members.

Here’s the first description of the village that Kate enters. This passage, with just enough description—not too much and not too little—is where I knew I’d entered a particularly well-drawn world:

Along Town Steet, a mix of shops and houses, we passed school, church, and Methodist chapel. Along Over Terrace, houses thinned out. Then came a rural lane, and two thatched sandstone cottages. Behind these dwellings spread narrow strips of fields and meadows into the open countryside. A little way on, Mary Jane pointed to a third house. “That’s us.”

I stopped the car opposite a two-storey sandstone dwelling, a couple hundred years old. It was set a little way back fro the road. The most cheerful thing about it was a blossoming apple tree to the left of the door.

Kate spends most of the first day investigating the disappearance and interviewing the villagers. I was particularly caught by Kate’s encounter with foreman at the stone quarry. Harriet is the young daughter of the missing man.

“The nasty piece of work?”

“He charges like a bull.’ The man was bearing down on us so fast that I willed him to trip and fall flat on his face. “Don’t let’s give him an audience, Harriet.”

I pointed my camera at the pool of still, dark water, and took a shot.

He was behind us, letting out some furious yell that turned into words. “What the blue blazes you playing at? We don’t abide skirts here.”

I turned to face him. He wore a cap, old corduroy trousers and ancient tweed jacket. The red muffler tied at his throat matched the colour of his bursting cheeks. His huge twin-peak nose had broken at least once. An old scar started above his eyebrow and crossed his cheek in wayward fashion. He stank of stale beer and tobacco.

It wasn’t until I finished Murder in the Afternoon that I realized how subtle and clever it is. Kate’s investigation of the missing man is definitely a thematic mirror of her own search for her missing husband, and she sees herself in her client’s relationship with her husband. At the end, fans of the series will get some closure on Kate’s search for her husband’s fate.

Still, Kate isn’t ready to move on now, or perhaps ever, which is clear from her relationship with her suitor, Marcus Charles, a police detective. It’s obvious she cares for him, but equally obvious that he isn’t ready to accept Kate as an equal, as detailed in the conversation with her mother.

Mother is very good at hearing an unspoken but.

“Mother, he is so old-fashioned!”

She shot me a surprised glance, which made me think Aunt Berta had tittle-tattled about my nights on the tiles. “He didn’t strike me as old-fashioned when we met him in Harrogate.”

“You saw him for five minutes.  When he toured me round Scotland Yard, he told me all about how they recruited policewoman in 1918, and then had to let them go, because of financial cuts. He said that when they first started, the women walked in twos…”

The only place where the story is lacking is the traditional clues that invite readers to solve their mystery along with the detective. Kate and Sykes investigate and uncover information, but the most significant clues are obscure and somewhat buried, and the answer to the major red herring didn’t have enough basis for me. But in the end, that didn’t effect my enjoyment. I’d grown to love the stalwart Kate.