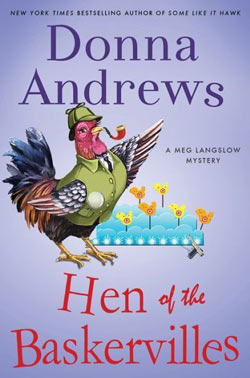 Hen of the Baskervilles by Donna Andrews is the fifteenth humorous mystery featuring blacksmith Meg Lanslow, her family, and the community of Caerphilly, Virginia (available July 18, 2013).

Hen of the Baskervilles by Donna Andrews finds series heroine Meg Langslow in charge of organizing this year’s Virginia Un-fair:

“This isn’t just a county fair, then?”

“No, it’s a statewide agricultural exposition,” Randall said. “This is our second year.”

“What inspired it?” the reporter asked.

“The possible demise of the Virginia State Fair,” Randall said. “Oh, I know it’s not really dead now, but last year when we started planning our first event, the nonprofit that was running the official fair was in bankruptcy, and no one knew if there’d be a fair that fall. And we thought that was a shame, so we organized our own event. And since it wasn’t officially the state fair, we decided to call it the ‘Un-fair.’ ”

The reporter chuckled at that, as most people did. “And you kept on with your plans even after the state fairgrounds and the right to hold the state fair were sold after all?”

“We did,” Randall said. “The folks who bought the rights to hold the official Virginia State Fair own a bunch of state fairs and other events. They know how to run a nice fair, I’ll give ’em that. I enjoy going there. But they were out of state, and a for-profit company, so last year we weren’t sure what their event would look like. We decided there was room for another kind of event, locally run, and with a different focus.”

“What kind of focus?” the reporter asked.

“Heritage animals and heirloom crops,” Randall said. “For example, in the chicken tent, we probably have twice as many different breeds of chicken as you’ll find at most events. Here, let me show you.”

Awesome, right? The very definition of wholesome family fun. What could possibly go wrong? Well, as it turns out, theft, vandalism, and murder, and that’s just the blotter for the opening day. So now in addition to everything else on her to do-list, Meg must stop a crime wave and catch a killer before these unsavory acts can prove to be the Un-fair’s undoing.

Sounds like the plot of your standard traditional mystery, no? As with everything else Donna Andrews writes, though, Hen of the Baskervilles is about so much more than the back cover copy might suggest. Yes, Andrews’ latest is a complex mystery with a quick pace; a thoroughly entertaining plot; fully fleshed, larger-than-life characters; and more animal-related hilarity than you can shake a mutinous llama at. But it also advocates strongly in favor of biodiversity, and offers up some of the most compelling arguments I’ve encountered to date regarding the importance of both small and backyard farms.

Fear not–Andrews is a subtle champion.  For example, she uses a chicken heist (and the investigation into said heist) to educate her readers regarding heirloom crops and heritage breeds:

“Two chickens are missing,” I said.

“Is that all?” he asked. “Then why do you have Horace going crazy doing forensics? Are they that valuable?”

“And they’re a rare, heritage breed,” Randall put in.

“What is with all this heritage and heirloom stuff, anyway?” Rob asked.

Talk about giving Randall the perfect opening to talk about his latest obsession. I tried not to giggle.

“Heirloom crops are ones that are in danger of falling by the wayside because they’re not the ones that Big Agriculture finds useful,” Randall began. “Same with heritage animal and bird breeds.”

A joke about turkey reproduction also serves to criticize the practices of factory farms:

The heritage breed turkey fanciers all seemed inordinately proud of the fact that their birds were all capable of breeding without artificial insemination. Or maybe they were just relieved.

“You mean every single turkey we see in the grocery store is a test-tube turkey?” one visitor was asking. “There must be millions of them!”

“Over two hundred and fifty million last year alone,” the heirloom turkey breeder replied. “And every single one of them a turkey-baster turkey, so to speak.”

“So easy for my birds to do without any help whatsoever from me,” the farmer said.

The women held out her hand for a flyer on how to order an heirloom turkey for Thanksgiving.

I didn’t need a flyer. I had all the turkey breeders’ names and addresses in my Un-fair files.

“But how do they do it?” the woman asked.

I decided this wasn’t something I wanted to hear about, so I moved on to the chicken tent.

This exchange between Meg and her husband Michael rather beautifully illustrates the appeal of the so-called “hobby farm”:

“Something wrong with those chickens?” he asked.

“No,” I said. “Except that they’re insidious. I covet them.”

“Are you hinting that I should bring you fried chicken for lunch?” he asked. “Or did you have in mind a longer term commitment, and you’re coveting those particular chickens? Is it payback time for all the llamas?”

“I am coveting live chickens,” I said. “Not necessarily those chickens, although those are among the breeds I am coveting. Clearly I have spent too much time with all these chickens. I keep having visions of walking out the back door in the morning and chucking grain to eager beaks. Peeking into the coop at night to gaze on my sleeping flock. And taking the boys out to the barn with little matching baskets to collect eggs. It’s insane.”

And she uses an internal monologue from Meg to not only passionately defend American hobby farmers against those who might call them dilettantes, but also to unpack the emotional baggage that often accompanies the term and suggest said baggage be stowed:

“What do you think?” Michael asked.

What did I think? I thought these guys would have a lot more luck selling chicks to people like Michael and me if they could learn not to use the phrase “hobby farmer.” Couldn’t he have said “small-scale farmer” or “backyard farmer” or something?

I stared back and forth between the two birds, as if pondering our choices, while I sorted through my negative reactions to the hobby farmer thing. Michael and I had five llamas, a vegetable garden fortified behind eight-foot deer fencing, and a fifty-tree semi-organic orchard. We weren’t trying to grow everything we ate. We weren’t selling anything. We just wanted to raise a little fresh produce, and maybe let the boys enjoy a life that was more connected than most to nature and history. Michael was a tenured professor at Caerphilly College, in line to become head of the drama department when the current chair retired. I had a career as a blacksmith that was not only lucrative and satisfying but allowed me the flexibility I needed now that we had a family. We didn’t have time to run a real farm. The orchard and the vegetable garden were an overgrown version of a typical suburban backyard garden patch, and the llamas were just for fun. We were the very definition of hobby farmers.

So why did the term sting so badly?

Probably something I should get used to. Since moving to our converted farmhouse, I’d come to realize how embattled traditional family farms were. The giant agricultural corporations drove prices down to a level small farmers couldn’t match, and developers were always waiting to snatch up choice tracts of land. Maybe hobby farmers were the least offensive alternative. People who bought a few acres—or even a whole lot of acres—not to farm but so they could live in an idyllic rural setting, and then began planting a few fruit trees, and raising a few sheep or cows. Or llamas. I’d never had the feeling that any of the nearby farmers resented Michael and me for buying our house with its few acres. Or Mother and Dad, who had bought the much larger farm next door. In fact, since my parents had bought the farm to save it from developers and rented much of the land to a nearby working farmer at a very low rate, most of the county’s farmers heartily approved of Dad. And at least we weren’t the kind of incomers who moved into a farm community and then began complaining about the smell of manure and honking furiously whenever we had to slow down behind a tractor.

Maybe I should work on thinking of “hobby farmer” as a badge of honor.

Plenty of news outlets have done pieces regarding the importance of biodiversity and the damage that Big Farm is doing to this country's agricultural heritage; I’m sure I heard a story about it on NPR, and I think also may have read an article on the subject in Mother Jones. To be honest, though, nothing any of those reporters said or wrote had much impact on me. This book, though? I'd be lying if I said it didn’t cause me to covet the neighbor’s green-egg-laying chickens or ogle the heirloom tomato plants at the local farmer's market. (Don’t worry, husband; I’m about 90% certain the chicken-shopping impulse will fade before I have the chance to act upon it. Well, 80% maybe. But the odds are still largely in your favor.) Reading Hen of the Baskervilles was not only an enjoyable experience – it was an extremely informative one, as well. And it made me think–not just about where my food comes from, but about how my decisions with regard to food impact the agricultural future of this country.

Donna Andrews is rare in that she not only writes small-town mysteries, she writes mysteries that champion small-town life and small-town values. Reading one of her books is like devouring a dessert only to discover that not only was it delicious–it was actually good for you, to boot. So what are you waiting for? Run out and buy a copy of Hen of the Baskervilles. Do it right now. Honestly, what more could you ask for in a summer read?