It’s 1923 and Kate Shackleton is running her own private investigations firm with the help of ex-policeman Jim Sykes. It is a profession she kind of fell into while searching for information regarding her husband Gerald, missing in action from the war. One evening she is visited by a man named Cyril Fitzpatrick, who is worried about his wife, Deirdre. He wants to hire Kate to find out what Deirdre is doing behind his back and where she is going when she disappears for lengths of time, saying she is visiting her ailing mother. Kate doesn’t take on matrimonial cases, but Mr. Fitzpatrick assures her that his marriage is not the issue and that he just wants to make sure Deirdre is not in any trouble. Mr. Sykes convinces Kate to take the case. He knows Deirdre because he helped her out of a shoplifting charge the year before, and is worried that if she is up to her old tricks she will not get off as easily this time.

Kate agrees to take the case, and soon follows Deirdre to Cotton Street, where she visits her sick mother. As Kate gets further and further from her comport zone, into a network of back streets, life in the area comes alive. It is not the glamour of high society London that the reader catches a glimpse of, it is the dark and dank part of Leeds where people struggle to live.

A couple of half-naked toddlers sat on the pavement edge, poking fingers into the black, sticky gas tar that had begun to melt. The women here, on their doorsteps and pavements, talking to neighbours, were poorly dressed, in dark serviceable clothes and large pinafores. One woman was scouring a window sill. Another swept the street outside her house. Conscious of my short sleeves, good shoes and the plain satchel that now looked exceedingly flamboyant, only dogged determination kept me on Mrs. Fitzpatrick’s trail. It struck me that we were the only women on these streets who wore shoes. Regulation footwear appeared to be down-at-heel slippers with holes in the toes.

Between every group of eight houses yawned a dismal alley. The slightly sweet and sticky stench of human excrement from the infrequently emptied earth closets made me want to hold my breath. It was Thursday, and so not wash day, but a couple of lines of washing stretched across the street. Patched sheets, worn towels and grey undergarments billowed gently in the soot-filled air.

As Kate is ramping up to tell Mr. Fitzpatrick that his wife is, in fact, simply visiting her mother, there is a murder at the Hotel Metropole. Everett Runcie, a well-known businessman and director of Kirkley Bank, is found dead in his hotel room. Witnesses say he was staying at the hotel with a woman, one who does not match the description of his wife.

We find out that the laws of marriage and divorce were different in England in 1923. There is a loophole in the law that provides an uncontested divorce to women if their husbands have committed adultery. It appears that there is a scheme taking place, where a husband and wife might be in agreement as to the divorce, and want to stage this episode of adultery. All that is needed is a woman unknown, to be seen at a hotel with the husband and provide the proof. Runcie seems to have been a part of this scheme, but the woman unknown has vanished and he has been murdered.

The scene of the crime does not offer many leads and Kate and Sykes become involved with the police to aid them in their murder investigation. Kate’s policeman friend, Marcus, asks for her assistance. Even though they have a past, they are still friends and she decides that helping the police might offer her an inside peek into the investigation, especially since she has a sneaking suspicion that she knows the identity of the woman unknown.

As we walked down one flight of stairs, he said, ‘I need to find the woman who was with Runcie last night.’

‘Lots of people must have seen her.’

‘She was slim, dark-haired and petite. I’d like you to take a look at what she left behind. There’s a gown and shoes still in the wardrobe.’

A uniformed man opened the door to the room on the second floor. I looked at the bed where Runcie had lain. It seemed so strange to think that we saw him alive on Wednesday, fed up about not backing a winner, and being rude to his wife.

Small things can sometimes be the most disconcerting. There was a dent in the pillow where Runcie had rested his head. The other pillow was plumped up.

There seem to be several suspects in Runcie’s murder, including a man the police are watching, who was seen with Runcie at the Hotel Metropole. Kate’s casual relationship with Philippa Runcie, the dead man’s American wife, allows her another avenue into the investigation. But could Philippa have murdered her husband in order to avoid divorce altogether?

The time period in which this series takes place is one of my favorites. Kate is a great character, modern for her time, running her own business and driving around in her 1913 Jowett. She is a well written character with a lot of depth and more story to tell. We get a mere glimpse into her personal loss, knowing her husband has never been found. We also see a small part of her family story and find out that she was adopted at a young age and has just recently met her birth mother and other family members. There is a lot to still discover, and I don’t doubt that this will be a series that will continue on for quite some time.

Every Wednesday, we here at Criminal Element will put together a list of Staff Picks of the books that published the day before—sharing the ones that we are looking forward to reading the most! This week, the first book in a new series from Yrsa Sigurdardóttir and Steve Cavanagh's second Eddie Flynn legal thriller highlight… 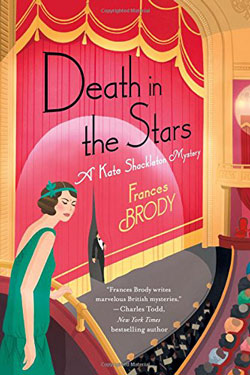 Review: Death in the Stars by Frances Brody

Frances Brody captures the atmosphere and language of 1920s England while delivering a captivating plot in Death in the Stars—the ninth book in the Kate Shackleton historical cozy mystery series (available February 13, 2018). It’s June of 1927, and all of England has caught eclipse fever. The next total eclipse won’t occur for 72 years,…

Book-Inspired Cocktails: “Death in the Bar”

Eclipses often symbolize chaos and disorder—but murder? Kate Shackleton better get to the bottom of all this death … and the bottom of a glass of this week's Pick Your Poison—where we create a cocktail inspired by a recently published mystery, thriller, or crime novel—the “Death in the Bar” cocktail, inspired by Frances Brody's ninth…