Among the relatives gathered are his fading actress daughter, her much-younger half-siblings (“the Twyns”), a resentful poor relation, and assorted cousins who can’t wait to get their hands on the castle’s furnishings and fittings and paintings, which include a suspected Reynolds and a minor Rembrandt.

What could possibly go wrong?

A Fatal Winter is a traditional mystery that takes on the tropes of the genre and gives them a modern edge while still retaining that cozy, Christie feel. The characters who are gathered at the castle are types, but G.M. Malliet has invested them with such vivid life that they reshape their roles. We wonder who will die first and that curiosity turns to gleeful anticipation as we get to know the family.

Oscar’s sister, Letitia (she prefers to be addressed as “Lady Baynard”), disapproves of everyone, including her twin brother. As the relatives gather for drinks and a discussion of what they might buy their host as a Christmas present, she surveys the motley crew with a jaundiced eye.

The togetherness was giving her heartburn. She looked about her with a barely concealed contempt, like the Queen watching a performance by the Duchess of York as captured by hidden video camera and wondering where, oh, where in her long reign things had begun to go so dreadfully wrong.

The person who might have drawn our sympathy, Lady Baynard’s companion, her adoptive granddaughter Lamorna, is a sly and bitter woman who listens at doors and stores up grievances. She has a right to feel aggrieved—Lady Baynard never lets her forget that she’s not related by blood and that “blood tells,” but she is an irritating person. We find ourselves appraising her closely, wondering if the huge wooden cross she wears around her neck to ostentatiously declare her faith is just the camouflage of a murderer.

And of course there’s going to be a murder. We know, as well as Lady Baynard, that there’s trouble brewing in Nether Monkslip.

Readers will recognize the literary landscape of G.M. Malliet’s Nether Monkslip immediately with its eclectic collection of inhabitants that includes a gorgeous pagan named Awena, a gossipy post mistress, assorted shopkeepers, and the odd neurotic cat.

The village is a refuge from the madhouse of London with its constantly rising threat levels; a retreat where protagonist Max Tudor’s major concerns are the “little frictions” of life and coming up with a Christmas sermon that isn’t a cliche.

Max is pulled into the investigation reluctantly, but once he’s involved, he brings to bear his former skills as an MI5 agent. Max is a man who views the world in a special way and his experiences did not erase his sense of humor.

At least, he reflected, the hotel had a plain, old-fashioned lift with deeply padded sides—none of these modern horrors made of glass, apparently conceived as a trial for people who are afraid of heights. The last time he’d had reason to stay in London, the hotel lift had been made of stainless steel with water cascading artistically down the sides—it was like being hoisted aloft in a high-tech colander.

When Max solves the murder—in the grand tradition of meddling ministers in cozy mysteries everywhere—he lays out his logic before a drawing room of suspects in a nice homage to the classics of the genre.

It’s all great fun, and readers will find themselves looking forward to whatever Malliet has in mind for spring in Nether Monkslip.

Looking for a new traditional mystery to read? Comment for a chance to win one of ten hardcover copies of A Fatal Winter by G.M. Malliet!

NO PURCHASE NECESSARY TO ENTER OR WIN. A purchase does not improve your chances of winning. Sweepstakes open to legal residents of fifty (50) United States and the District of Columbia, who are 18 or older. To enter, fill out entry at https://www.criminalelement.com/blogs/2012/10/fresh-meat-a-fatal-winter-by-gm-malliet-cozy-traditional-max-tudor-mystery-katherine-tomlinson beginning at 09:30 am. Eastern Time (ET) October 16, 2012. Sweepstakes ends at 11:59 a.m. ET on October 23, 2012 (the “Promotion Period”). Void outside of the 50 US and DC and where prohibited by law. Please see full details and official rules at https://www.criminalelement.com/page/official-rules-the-fatal-winter-comments-contest. Sponsor: Macmillan, 175 Fifth Ave., New York, NY 10010 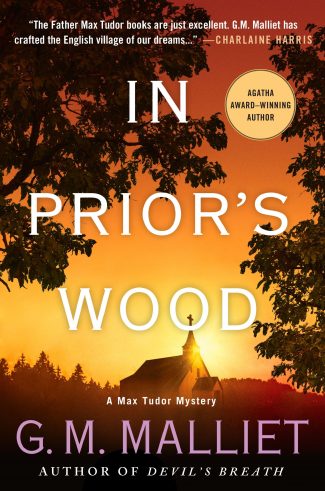 In Prior’s Wood by G. M. Malliet is the seventh book in the Max Tudor series. I’ve been reading G. M. Malliet’s Max Tudor series since the beginning, and I feel that with this seventh installment, she’s really hit her stride with the sly-but-not-unkind humor that leavens an otherwise dark and twisting tale of the inner… Devil's Breath by G. M. Malliet is the 6th book in the Max Tudor series. I’ve always enjoyed the novels in G. M. Malliet’s Max Tudor series and find that they tend to get better as the series progresses. That said, I haven’t been the good completist that I usually am, and so I want to…

Every Wednesday, we here at Criminal Element will put together a list of Staff Picks of the books that published the day before—sharing the ones that we are looking forward to reading the most! Another great week is upon us as we get a new Lisa Scottoline thriller, the 3rd Pete Fernandez mystery from Alex… 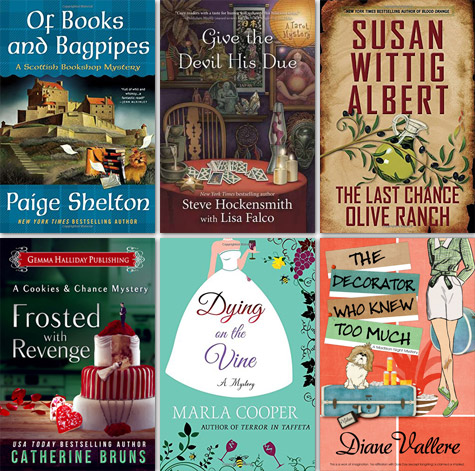 Discover (or remember to order) your next cozy with a delightfully convenient shopping list of upcoming soft-boiled mysteries! Last month, we welcomed in spring (or we thought we would … ahem, snow storm) with March's releases; this month, we're hoping for warmer weather with April releases! Let us know in the comments how you like…