Another great week is upon us as we get a new Lisa Scottoline thriller, the 3rd Pete Fernandez mystery from Alex Segura, and a stunning debut from M. L. Rio! See what else this week brings in the way of books:

If We Were Villains by M. L. Rio

Oliver Marks has just served ten years in jail—for a murder he may or may not have committed. On the day he's released, he's greeted by the man who put him in prison. Detective Colborne is retiring, but before he does, he wants to know what really happened a decade ago.

As one of seven young actors studying Shakespeare at an elite arts college, Oliver and his friends play the same roles onstage and off: hero, villain, tyrant, temptress, ingénue, extra. But when the casting changes, and the secondary characters usurp the stars, the plays spill dangerously over into life, and one of them is found dead. The rest face their greatest acting challenge yet: convincing the police, and themselves, that they are blameless.

Read an excerpt from If We Were Villains, or take a visual tour with GIFnotes!

One Perfect Lie by Lisa Scottoline

A handsome stranger moves to the small Pennsylvania town of Central Valley, and his name is Chris Brennan. He's applying for a job as a teacher and varsity baseball coach at the local high school, and he looks perfect, on paper. But his name is an alias, his resume is false, and everything about him is a lie. And he has a secret plan—for which he needs a pawn on the baseball team.

Susan Sematov loves her younger son Raz, the quirky and free-spirited pitcher of the team. But Raz's adored father died only a few months ago, and the family is grief-stricken. Secretly, Raz is looking to fill the Daddy-shaped hole in his heart.

Heather Larkin is a struggling single mother who's dedicated to her only son Justin, the quiet rookie on the team. But Justin's shy and reserved nature renders him vulnerable to attention, including that of a new father-figure.

Mindy Kostis is the wife of a busy surgeon and the queen bee of the baseball boosters, where her super-popular son Evan is the star catcher. But she doesn't realize that Evan's sense of entitlement is becoming a full-blown case of affluenza, and after he gets his new BMW, it's impossible to know where he's going—or whom he's spending time with.

The lives of these families revolve around the baseball team—and Chris Brennan. What does he really want? How far will he go to get it? Who among them will survive the lethal jeopardy threatening them, from the shadows?

Read an excerpt from One Perfect Lie or take a visual tour with GIFnotes, all while sipping a “One Perfect Rye” cocktail inspired by the book!

The Burial Hour by Jeffery Deaver

A businessman snatched from an Upper East Side street in broad daylight. A miniature hangman's noose left at the scene. A nine-year-old girl, the only witness to the crime. With a crime scene this puzzling, forensic expertise of the highest order is absolutely essential. Lincoln Rhyme and Amelia Sachs are called in to investigate.

Soon the case takes a stranger turn: a recording surfaces of the victim being slowly hanged, his desperate gasps the backdrop to an eerie piece of music. The video is marked as the work of The Composer…

Despite their best efforts, the suspect gets away. So when a similar kidnapping occurs on a dusty road outside Naples, Italy, Rhyme and Sachs don't hesitate to rejoin the hunt.

But the search is now a complex case of international cooperation—and not all those involved may be who they seem. Sachs and Rhyme find themselves playing a dangerous game, with lives all across the globe hanging in the balance.

Pete Fernandez has settled into an easy, if somewhat boring life as a P.I. He takes pictures of cheating husbands. He tracks criminals who've skipped bail and he attends weekly AA meetings The days of chasing murderous killers are behind him. Or are they?

When his partner Kathy Bentley approaches him with a potential new client, Pete balks. Not because he doesn't need the money, but because the case involves Gaspar Varela, a former Miami police officer serving a life sentence for the murder of his wife—one of the most infamous crimes in Miami history. The client? None other than Varela's daughter, Maya, who's doggedly supported her father's claims of innocence.

As Pete and Kathy wade into a case that no one wants, they also find themselves in the crosshairs of Los Enfermos, a bloodthirsty gang of pro-Castro killers and drug dealers looking to wipe Pete off the Miami map. As if trying to exonerate Varela wasn't enough, they find themselves entangled in something even older and more surprising—a bloody, political hit ordered by Fidel Castro himself, that left a still-healing scar on Pete—and his dead father's—past.

Read an excerpt from Dangerous Ends!

The body of glamorous film star Margot Browne has washed ashore from a luxury yacht and Max’s former colleague Patrice Logan wants his help to find the murderer.

It’s a perfect “closed circle” murder since victim Margot must have been killed by one of the actors, stylists, screenwriters, or second-tier royalty aboard. Patrice suspects the yacht’s owner, a playboy film director she’s been keeping tabs on for smuggling, but Max isn’t so sure. Max and DCI Cotton interview the suspects as they loll about one of the luxury hotels dotting the waterfront. The investigation into Margot’s lurid past uncovers a host of motives—it seems she was not the only person on board with a secret they’d kill to keep.

Read an excerpt from Devil's Breath! 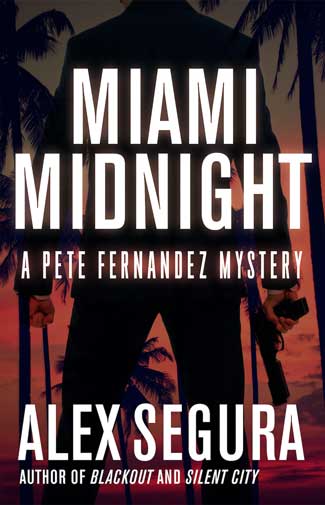 Miami Midnight by Alex Segura is the fifth and final entry in the Miami-based Pete Fernandez series, where the recently retired private investigator is drawn back into detective work by his most personal case.  Pete Fernandez is back from the dead. As Miami Midnight opens, Pete is sitting in his therapist’s office telling her about…