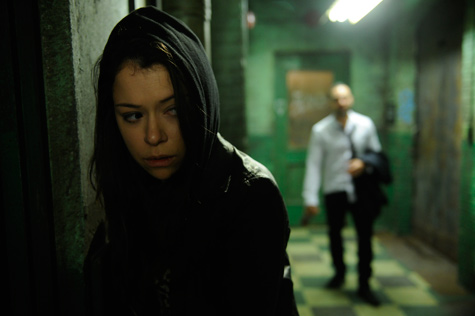 If you like your mysteries with a generous heaping of intrigue, action and great acting, plus a side of sci-fi, BBC America’s Orphan Black is a tasty dish, indeed. The fantastic drama begins when scrappy streetwise orphan Sarah Manning happens to witness the suicide of a woman who looks identical to herself and decides to step into her life to make a little cash. But she soon discovers that the dead woman wasn’t just a long-lost twin…but one of a series of clones.  And someone is trying to kill them.

The series just aired its seventh (of ten) episodes last Saturday, and each installment just keeps getting better and better. In case you missed Christopher Morgan’s introductory post, here’s a handful of reasons to catch up with the show and tune in:

1.      Two words: Tatiana. Maslany.  This little-known actress who previously played small roles in Canadian shows like Heartland and Being Erica is a real find. Generally when one actress plays multiple parts on a TV show, she’s a lead whose “other” personalities are recurring (like Nina Dobrev’s segues as Katherine on The Vampire Diaries) or she’s a smaller part of a big ensemble (like Tricia Helfer playing the Number Six models on Battlestar Galactica). But this Saskatchewan native has so far played six different clones, all with wildly different personalities, who make up most of the show’s screen time. (The video below explains how difficult it is shooting the multi-clone scenes.)

British Sarah is our lead, and she’s impersonating (dead) Canadian police detective Beth. There’s also American scientist Cosima and Canadian soccer mom Alison, sickly German Katja, Ukranian religious psycho Helena… and we’ve learned there are more clones (French! Italian! They could populate a whole UN!) out there. To make things more difficult for Maslany, in recent episodes the clones have been impersonating each other (i.e. Alison steps in as Sarah, Helena masquerades as Beth, etc.). And to her enormous credit, every time a new clone is introduced, she’s more compelling than the last—Maslany plays every single one of them to distinct perfection.

2.      Tight character-driven focus. Non-procedural, truly character-driven mystery series are rare on television, and this serial drama could’ve easily gone another way, bogging us down with Sarah-as-Detective-Beth ineptly investigating various crimes of the week with her partner Art. But co-creators  Graeme Manson (Flashpoint) and John Fawcett (Spartacus) wisely keep the story narrowly focused on the cloning drama. Even the cases Beth investigates are related somehow and lead to more of the identity drama unfolding. But it’s not all mystery and intrigue, either. The heart of the story is Sarah’s personal life and development. In the midst of all this chaos, Sarah is growing and adapting as a person, becoming less selfish and wanting to do the right thing. She starts out trying to scam money to get herself, her daughter Kira, and her only friend/support system, her former foster brother Felix, to a safer, better life and away from her drug dealer boyfriend Vic. By Episode 5, Sarah’s passionately telling Vic that she wants to do the right thing, and acting compassionately toward her clone sisters.

3.      Risky business. Every episode seemingly ends with a gasp-inducing cliffhanger as more and more complications come Sarah’s way. The writers aren’t afraid to take risks and throw their characters into danger again and again, with new quandaries popping up each episode:  What really happened with the wrongful shooting Beth was involved in before she killed herself? Is Sarah’s foster mother a villain or a helpmate? What is the significance of the fish symbol that keeps popping up in different places? Why does Sarah seem to be the only clone who can procreate? Also, characters that seemed like throwaways at the beginning of the series, like Beth’s live-in lover Paul, who went to stay with a friend in Episode 2, have returned to figure into the major mystery. It would’ve been easy, lazy writing to let Sarah off the hook in the romance department. (She’s already faking being a cop, does she really have to fake orgasms too?) While Paul’s early lack of…uh…observational skills regarding his girlfriend (let’s just say Sarah wasn’t ALL that reluctant about faking it) pushed disbelief suspension barriers a bit, he’s rebounded as an important and interesting figure in this drama. 4.      Sure, it’s sci-fi, but it’s not SCI-FI. Part of the appeal of the show is how grounded in reality it’s been.  If you’re a traditional mystery fan who doesn’t care for any woo-woo funny business, the cloning and science fiction-y elements have been minimal and gradually introduced. By Episode 4, we’re too hooked on why Helena is so unbalanced and what she’ll do next to worry (too much) about those strange scars on her back. And it’s not until halfway through the season that we get one of those freaky was-it-a-memory-or-a-dream-or-OH-CRAP-IT-REALLY-HAPPENED scenarios.

5.      It’s just damn good TV. There’s intrigue! There’s action! There’s romance! There’s family drama! Basically, the show has something for everyone. All in all, Orphan Black is suspenseful like whoa, boasts some great acting, and has a fair bit of heart. What more could you ask for?