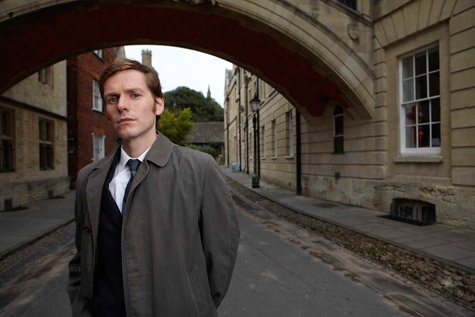 Call me fickle: just as I was mourning the loss of Inspector Lewis and Sergeant Hathaway, along comes another man to steal my heart. His name is Shaun Evans, and if there are photos of him frolicking on the beaches of the French Riviera or cavorting in Las Vegas, I don’t want to see them.  For me, he is Endeavour Morse, a young man with an old man’s countenance, the mind of a mathematician, and the soul of a poet.

This week’s episode of Endeavour, which kicks off a four-episode series, is thoroughly satisfying for old school Morseophiles. Writer and series creator Russell Lewis fills it with word play and brain teasers, such as this one for the cruciverbalists: “Running over a dune is an effort (9 letters).” So confident is he that we crossword-solving lovers of Morse will puzzle this one out, the answer isn’t even divulged in the script.

We start on a typical Friday afternoon, on which we’re faced with a barrage of secret messages and significant glances that we just know are disguising all sorts of subtext. That man isn’t really asking for a postal order, is he? What are those secretarial students writing to each other in shorthand? Who is sending threatening anonymous letters to the distinguished professor of physics? “Anything for the weekend, sir?” asks the leering barber.

While everyone in Oxford appears to be dolling up for a night out, Endeavour is preparing to settle in with his copy of Moriarty’s Police Law. This book is a real thing—“An Arrangement of Law and Regulations for the Use of Police Officers”—that a young officer would have studied to pass his exam for promotion. That it’s called Moriarty’s is just a happy coincidence considering that Endeavour Morse will do the full Sherlock about 23 minutes into the episode…

But first, a corpse:

Margaret Bell, age 20, is found dead of an apparent heart attack. Seeing Margaret fit and fine just a few moments earlier, we have no reason to believe a heart attack was her actual cause of death, and her G.P. confirms as much shortly after. She did have a weak heart, but if she’d been taking her medication she shouldn’t have suffered a heart attack. The doctor has questions, and now so does Morse.

Mark that down as suspicious death number one. There are more to follow as secrets are revealed, criminals are confronted, and unpleasantness ensues.

With prickly Chief Superintendent Bright (Anton Lesser) now part of the office hierarchy, Morse is warned to toe the line. But he can’t help himself. Examining what appears to be an ordinary bicycle, he pronounces that it is in fact owned and ridden by an elderly, left-handed clergyman. (Hello, Sherlock!) Chief Superintendent Bright is predictably underwhelmed by this display of Morse’s acumen. 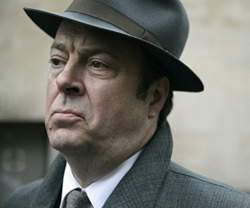 DI Fred Thursday (Roger Allam) is left to grit his teeth and soothe the superintendent. As Morse’s boss and protector, Thursday is the mentor we all wish we’d had. If not for Thursday, it’s clear Morse never would have had the chance to become Morse. He certainly doesn’t have any fans among his peers, and the fact that he’s an oddball who’s been fast-tracked for promotion isn’t likely to enhance his popularity. It has raised his notoriety though; everyone knows who Morse is. That includes young constable Jim Strange (Sean Rigby) whom Endeavour meets in this episode. We know Constable Jim will grow up to be Chief Superintendent Strange (played by James Grout in the Inspector Morse series). It will be fun to see how their relationship develops in Endeavour. Young pathologist Max DeBryn is back as well, played with endearing quirkiness by James Bradshaw.

As the title of the episode implies, the heart of the mystery involves a young woman. “Your blind spot for a damsel in distress will be your undoing,” Thursday tells Morse. We already know he’ll be proved right time and again. Yet knowing what we know about Morse the man, makes watching Endeavour that much more of a pleasure. The young detective constable is wise beyond his years in many respects; in others he’s so very, very young.

“You can’t deny the novelty of a great undergraduate serving as a constable with the city police,” the Oxford professor says to him.

“I can try,” replies Morse with a grim smile.

But, like “running over a dune” that will be an effort. Or, more fittingly, an endeavour.