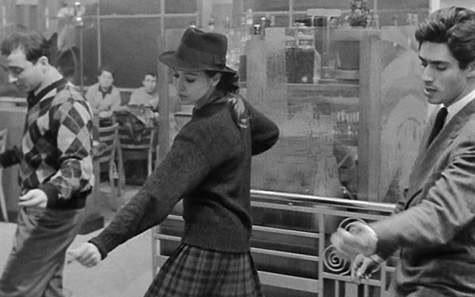 Normally, one doesn’t think of dancing when one thinks of crime films. Sure there’s the occasional Broadway adaptation like Chicago or Guys and Dolls, but most filmmakers don’t interrupt the heist to show some hoofing. Yet there is a time-honored tradition of singing in crime films. All the way from Marlene Dietrich in The Blue Angel to Jennifer Connelly in Dark City, soulful songstresses have been a staple of film noir. But it’s rare to see main characters, especially male characters, dance on film. Dancing is too sensual, too soft for most crime films.

I want to talk about three notable exceptions to the “no dancing allowed” rule. All these scenes come from directors more than willing to go against the grain and push genre boundaries. Dancing here isn’t just a distraction—it’s an effective way to move the plot forward without words.

For all their high-culture and revolutionary intentions, the directors of the French “New Wave” were making crime films. What sets the French noirs apart is that the filmmakers chose to ignore all the rules established by American crime films. In Jean-Luc Godard’s Bande a part/Band of Outsiders (1964) Arthur and Franz convince Odile to join them in robbing her own aunt. It’s technically a heist film, but the movie takes repeated detours away from crime and plotting in order to show the three characters having fun and getting to know each other. They attempt to break the world record for running through the Louvre, they drink a lot of wine, and, in one of French cinema’s most famous scenes, they dance.

Odile is being wooed by Arthur and Franz and the three of them go to a café. A song comes on in the café and Odile wants to dance. Arthur and Franz quickly join her in the middle of the restaurant and the trio do the Madison—a line dance popular at the time. Godard leaves the camera on them for more than five minutes while they dance to a simple, poppy instrumental. The sequence fits in with Godard’s overall disregard for the rules. His criminals were amateurs who danced as poorly as they robbed, and Godard risked boring the audience by forcing them to watch the main characters break into a not very good dance.

But the scene does have a purpose. We learn about the characters by watching them dance. The sequence is not particularly sexy and their bodies never touch. Odile moves gracefully, but is still very young and looks a little nervous. Arthur and Franz each try to outdo each other in looking more relaxed and slack-shouldered. Together, the three of them don’t knock your socks off with their moves. The steps are fairly simple, and it’s about as impressive as watching three slightly drunk people do the cupid shuffle at a wedding. Seeing this amateurish dance signals to the audience that Odile and company’s scheme won’t go off the way they’re hoping.

This scene from Bande a Part influenced one of the most famous dance scenes in film history. This is the scene that everyone thought of when they started reading this post—the Uma Thurman and John Travolta twist contest from Pulp Fiction (1994). This is easily the most famous scene in the movie. It’s the scene that your grandmother who hasn’t seen Pulp Fiction can recognize. It’s a scene that’s in the collective pop-culture unconscious—easily parodied, often referenced, and never forgotten.

I think this scene sticks out for the same reason that the Madison scene in Bande a Part sticks out. Namely, it’s a weird thing for the characters to be doing. Vincent Vega has already killed several people by this time in the film and we know he uses heroin—two traits not usually associated with tearing up the dance floor. Mia Wallace seems flirty, but also more than a little pouty and privileged—she doesn’t seem the type to grind with the help.

It’s worth noting here than Godard was a major influence on Quentin Tarantino and I think the two scenes are directly linked. QT named his production company “A Band Apart” and Mia Wallace’s hair and wardrobe are taken directly from Anna Karina—Godard’s lead actress in Bande a Part, Pierrot le Fou and most of his films from the 1960s.

But these two dance scenes, while connected, serve different functions. Godard’s Madison scene is playful foreshadowing, but the twist scene shows Mia and Vincent getting to know each other. Before they get on the dance floor they’re having awkward conversation about milkshakes and dead movie stars. It’s tense. But their moves on the dance floor and Chuck Berry’s guitar break through the awkwardness. Immediately after the dance scene they’re back at Wallace’s home, giggling and friendly. The two characters don’t charm each other through dialogue; instead, they need to dance before they’re comfortable with each other.

Tarantino, like Godard, knew that getting the characters to shut up and move would be different yet effective. But of course Tarantino steals from his influences and turns everything up to 11. So where the Madison is clunky, the twist scene in Pulp Fiction is ludicrously polished. The characters never miss a beat and are perfectly in-tune with each other the entire time. To a certain extent, it’s the least realistic scene in the whole movie.

The twist scene serves as a lighthearted and sexy interlude in Mia and Vincent’s doomed relationship—it’s about to get very bad, very quickly for both characters, but for these few minutes all that matters is the dance.

The third scene I’m looking at also, oddly enough, takes place in a restaurant. David Lynch uses music better than nearly any other filmmaker. The tone and atmosphere of his films, and of Twin Peaks, is strengthened by the nearly constant music and ambient noise. Sometimes the sound lingers just on the edge of hearing, and other times the music completely takes over, but it’s almost always perfectly chosen.

Twin Peaks has a ton of dancing. The Man from Another Place snaps and shakes his hips in a classic scene; Leland Palmer dances by himself first out of grief and later out of craziness; and there’s often dancing in the roadhouse and at The Great Northern. An early dancing scene takes place in episode two and I think it tells us a lot about how the rest of the show is going to unfold.

Audrey Horne and Donna Hayward, played by Sherilyn Fenn and Lara Flynn Boyle, are in the RR Diner talking about the murder of Laura Palmer. Both girls are in high school and Laura was Donna’s best friend. A song comes on the jukebox, a sultry, jazz instrumental with a slow bass line. Audrey walks away from the lunch counter, stands in front of the jukebox, closes her eyes and sways to the music. Donna (like the viewer) can’t take her eyes off Audrey and is (also like the viewer) at first amused, then deeply entranced. In the back corner of the diner sits Donna’s parents looking at Audrey suspiciously.

David Lynch, like Godard and Tarantino (to a lesser extent), is often accused of being weird just for the sake of weirdness. But there’s nearly always a method to his madness. This minute-long dance, while completely wordless, tells us nearly everything we need to know about the town and the show. Your normal expectations of how people should act need to be discarded. It’s a town out of time and high school kids don’t listen to rap or heavy metal—they listen to jazz and dance alone in public.

The great Angelo Badalamenti wrote the music for Twin Peaks and the name of this song, which appears throughout the show, is “Audrey’s Dance.” Audrey’s dance is very simple and is actually more of a sway. She leans her head back, moves her hips and lets her arms hang loose at her sides. Occasionally she’ll roll her neck to the side and look at Donna. Her feet barely move at all. Yet there’s something undeniably sexy about Audrey’s dance, and it intimidates Donna. Twin Peaks is a town full of repressed sexuality and when it’s expressed the old folks in the corner glare at you.

Audrey’s dance, both the scene and the song itself, highlight the mystery that lies at the heart of the show and inside each of the characters. Their motivations can be murky—Why is she dancing? Why is that person holding a log? Who would want to kill the prom queen?—but the existence of a mystery is part of the point. Lynch isn’t just trying to solve a murder; instead, he’s saying that we’re surrounded by mysteries.

The dance interludes in these films are not mere detours or distractions. They’re not an attempt to kill time or confuse the viewers. Dancing, in these scenes, moves the plot forward and advances character development in a way  dialogue cannot.