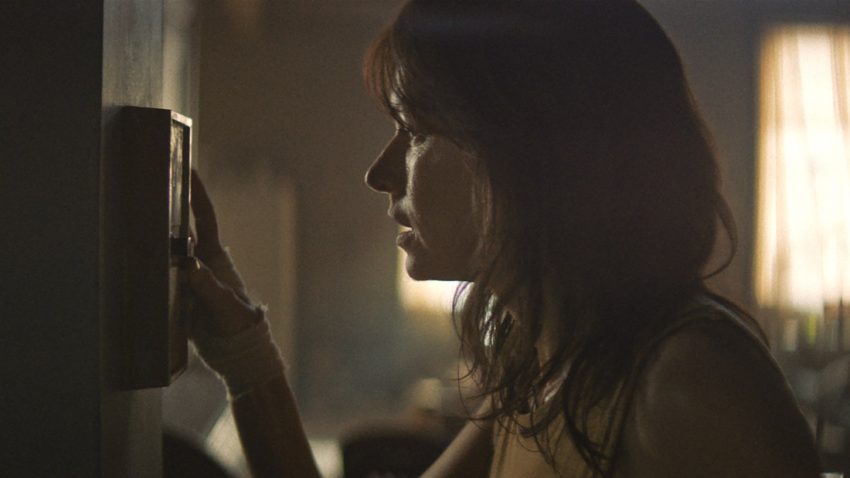 June Leigh is a lot like the heroine of Wait Until Dark, except it is her own hang-ups and agoraphobia that keeps her trapped in her apartment. It is also unclear whether her tormentor is flesh-and-blood or a figment of her fevered mind. Nevertheless, there is indeed plenty of danger outside her door in the surrounding South Bronx neighborhood, during the sweltering summer of 1977. Leigh could be paranoid, but someone still might be stalking her (or trying to gaslight her) in Alistair Banks Griffin’s The Wolf Hour, which premiered during the 2019 Sundance Film Festival.

Leigh exploded onto the New York literary scene with her debut novel, but she subsequently went into retreat. Holed up in her grandmother’s former flat, Leigh has been living off the advance for her unwritten follow-up novel. The neighborhood has changed since her late grandmother’s time, but that only partially explains Leigh’s fearfulness. Petrified to step outside her front door, she subsists on cigarettes and groceries delivered from the corner store. Yet, her anxiety is not altogether groundless. This is, after all, the South Bronx, during the Son of Sam killer’s reign of terror.

Unfortunately, Leigh’s isolation has made her a vulnerable target for the unseen person harassing her. He (presumably) seems to take sadistic delight in ringing her really-darned-loud buzzer late at night and whenever she least expects it. Try as she might, she can never catch a glimpse of him. She even reports the matter to the police, but the cop who responds could be even more thuggish than the sketchy element loitering on the street below.

a compelling portrait of a difficult, damaged woman, under extreme stress

The Polanski influence on Wolf Hour is as evident as the summer day is long. Still, Griffin definitely instills a claustrophobic vibe right from the start. However, the design team’s recreation of the “Bronx is Burning” era is what really distinguishes and defines the film. They completely transport the audience to way-way-pre-Giuliani New York, in all its polyester dinginess.

Unfortunately, all the tension Griffin builds goes for naught, due to a flat third act that never really pays off. You can practically see the film flailing about, in search of an ending. Once the film leaves its confined setting, the spell is broken. It is a shame, because Naomi Watts does tremendous work as Leigh. She creates a compelling portrait of a difficult, damaged woman, under extreme stress. She is a hard person to like, yet we worry about her greatly throughout the film.

Jennifer Ehle helps ground the film as Margot, Leigh’s former lover turned concerned friend, but it is Kelvin Harrison Jr who really cranks up the electricity as Freddie, the delivery guy she starts to trust. Their scenes together really crackle and pop. Jeremy Bobb is also 70s sleaze personified as the leering Officer Blake.

The set-up impresses, but the pay-off is lacking in Wolf Hour. A great deal of craftsmanship went into the production, but the script should have gone through further revisions. The results are decidedly mixed, but Watts’ star turn should guarantee considerable fest play and eventual distribution for The Wolf Hour, following its premiere at this year’s Sundance Film Festival.