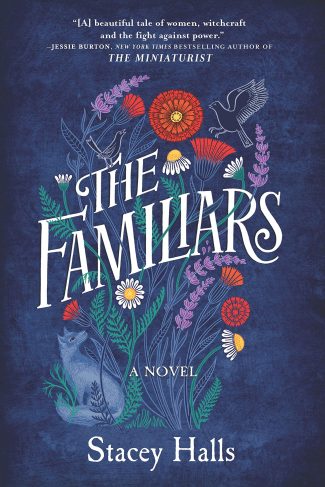 Stacey Halls’s The Familiars is set against the backdrop of the Pendle Witch Trials of 1612. After three previous miscarriages and with a baby on the way, Fleetwood Shuttleworth leaps on the opportunity for assistance from a midwife, Alice. But when Alice is accused of practicing witchcraft, Fleetwood must decide whether she can trust her for the sake of her unborn child.

The Familiars is set in Pendle Hill, Lancashire, a site famous for the witch trials of 1612. England is ruled by King James I, a Protestant monarch. There is great religious tension in England because “demonstrations of loyalty” to the Crown do not easily co-exist with the “old ways of faith.” That struggle is at the core of The Familiars. That and a young wife’s desperate wish to bring a healthy baby to term. Mistress Fleetwood Shuttleworth is pregnant for the fourth time: her previous three pregnancies ended in miscarriages. It is her husband Richard’s dearest wish that his wife be safely delivered of an heir and, God-willing, a spare.

The story opens with Fleetwood blindly seeking refuge in the woods surrounding her stately home. In her tenuous emotional state, being the mistress of Gawthorpe Hall is cold comfort. She is upset because she inadvertently discovers a letter to her husband from a physician. She re-reads the blunt, frightening words, “…if she finds herself once more in childbed, she will not survive it, and her earthly life will come to an end.” Fleetwood encounters a strange woman, so camouflaged by her shabby, sodden, earth-colored clothing that she is almost impossible to see.

Her face was long and narrow, her eyes large, their color unusual even from a distance: a warm gold, like new coins. There was something fiercely intelligent, almost masculine, in her gaze, and though she was crouched down and I standing, for a moment I felt afraid, as though I was the one who had been discovered.

A few days later Fleetwood has a disturbing conversation with Roger Nowell, an older family friend of hers and Richard. He speaks to her of familiars and witchcraft. A witch, according to Roger, can assume animal identities, take on a familiar spirit: “This witch is a dog, but they can appear as anything—an animal, a child.” When Fleetwood questions Roger further, he brushes her off, saying they need to catch up with Richard, who “will not be happy with me for lagging behind indulging you. This is what happens when women come on hunts.” Is it, or does Roger want to shut down the conversation?  Is his obsession with persecuting witches a way to prove his loyalty to King James? Roger tells Fleetwood that, “This corner of the kingdom with its Catholic heritage causes His Majesty a great deal of anxiety.” Fleetwood points out the obvious, that “Catholics and witches are not the same thing,” but Roger pays her no mind.

Fleetwood is consumed with worries about her pregnancy. Stacey Halls’s metaphors are earthy and dire.

If the doctor was to be believed—and no doubt he was—the child was fattening like a conker in a spiked green shell, and eventually would split me open. A child was what Richard wanted more than anything, and where I had failed before perhaps I would not this time…but at the cost of my life?

Fleetwood takes a heavy fall while riding back from the nearby village and is rescued by the same mysterious woman. She brings her savior back to Gawthorpe Hall, and finds out that Alice Gray is a midwife, following in the steps of her famed mother. She asks Alice to tend her pregnancy and Alice agrees. Alice’s mother has taught her well.

“You are like a traveling herb merchant—Richard would be impressed.”

“Anethum graveolens.” She pointed from left to right. “Calendula, lavendulan, camamelum.” I stared at her in bewilderment, and she laughed. “To you, and your cook—dill, marigold, lavender, chamomile.”

“You know the Latin names? I thought you couldn’t read?”

She blinked. “I can’t. My mother taught me. Every good herbalist knows the proper names.”

A midwife’s role is to protect the life of mother and child so when Alice tells Fleetwood she can bring her and her unborn child safely to term, their lives are irrevocably intertwined. Why then does Roger imprison Alice? He claims that Alice is part of a family of witches. What does Roger fear from Alice? Alice states baldly that the King, and those who would please him, are afraid of wise women.

“Most women are wise.”

I could not tell if she was teasing me. “Are they to be trusted?”

Alice gave me a look. “According to the king? No. He has driven them into the shadows, but people are still sick, and dying, and having children, and not everyone has a royal physick. The king has muddled wise women with witchcraft.”

The Familiars is not an intellectual exploration of the tension between Protestantism and old country ways of healing the sick. After Alice Gray is taken into custody and condemned to death, Fleetwood must free her. Not only Alice’s life but Fleetwood’s life and the life of her unborn child hang in the balance—the stakes are truly life and death.

The Familiars is a riveting story, and although it takes place more than three hundred years ago, it raises issues that are still yet to be resolved.

Many of the characters in The Familiars are “historical figures” but Stacey Halls goes beyond a fictional recasting of the Pendle witch trials. She deftly “explores the lives and rights of seventeenth-century women, ultimately raising the question: Is witch-hunting really just women-hunting?” The second definition for witch-hunt, taken from Merriam-Webster, may also occur to readers: “the searching out and deliberate harassment of those (such as political opponents) with unpopular views.” Simply substitute the word “religious” for “political.” The Familiars is a riveting story, and although it takes place more than three hundred years ago, it raises issues that are still yet to be resolved.

Historical note: During the “early modern period” an unconscionable number of women were accused of being witches: “an estimated 50,000 persons were burned at the stake, of which roughly 80% were women, and most often over the age of 40.”