February 4, 2020
Perfect Little Children by Sophie Hannah, the New York Times bestselling author of The Monogram Murders, Woman with a Secret, and The Next to Die is a captivating and expertly plotted novel of psychological suspense. 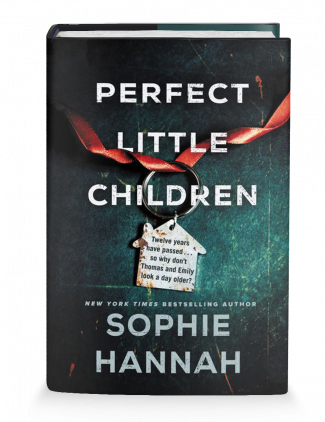 New York Times and internationally bestselling author Sophie Hannah has been thrilling readers stateside and across the pond for years with her novels of psychological suspense, whether singular stories, the Zailer and Waterhouse series, or Golden Age whodunits featuring Agatha Christie’s iconic detective, Hercule Poirot. Also an accomplished poet and podcaster, and the visionary behind the Dream Author coaching program, she makes her home in the UK. Hannah’s newest, Perfect Little Children, is a standalone with a startling premise.

London mother and massage therapist Beth Leeson hasn’t seen her former BFF Flora Braid in more than twelve years, not since their friendship fractured and the Braids moved away. But her son’s soccer game puts Beth in the vicinity of their last known address and she can’t resist the urge to do a quick drive-by to scope out their house. This simple act throws Beth’s life into complete chaos when she witnesses the unfathomable: Flora tending to her two children, Thomas and Emily, who appear exactly as they did more than a decade ago rather than as the teenagers they should have grown up to be.

Despite her husband Dom’s incredulity, Beth is firmly convinced that she saw (and heard) correctly, and vows to get to the bottom of things. Willing to humor her, at least initially, Dom does a search across social media platforms and finds that Flora’s husband, Lewis, is now living in Florida; pictures show him posed there with the appropriately aged Thomas and Emily—but there’s no evidence of Flora or their youngest child, Georgina. Rather than putting her mind at ease, this internet sleuthing—and the questions it raises—further incites Beth’s need to discover the truth of the matter; after all, she can’t help but thinking Flora and the children may be in danger. But digging into the past can be a deadly proposition.

Not only is the central mystery a real mindbender, but it permutates repeatedly as the narrative unfolds. (The less you know the greater the payoff.) Beyond the welfare of Flora and the children, there’s the question of just what broke the Leesons’ and Braids’ friendship to begin with, and how that may (or may not) play into whatever’s going on in the present day. The story is told through Beth’s eyes, which effectively bonds her to the reader—even as others are increasingly repelled by her seemingly crazy compulsion to persist. The domestic upheaval this singlemindedness causes becomes as much a point of tension as the higher concept confusion, thereby grounding the work in a sense of realism.

Read More: Review of The Next to Die by Sophie Hannah

Perfect Little Children is a cunningly complex caper with a simple question at its core: How far will you go to find the truth when nobody believes you, or cares to do the same? It’s one thing to proffer a uniquely compelling premise and another thing entirely to sustain that idea all the way through to a conclusion that satisfies and surprises. The author delivers on both counts. Nobody tells a tale, or twists it, quite like Sophie Hannah.