October 6, 2020
Andrea Penrose transports readers to Regency England with the story of Lady Charlotte Sloane and the Earl of Wrexford who must untangle a dangerous web of secrets and lies that will call into question how much they really know about the people they hold dear... 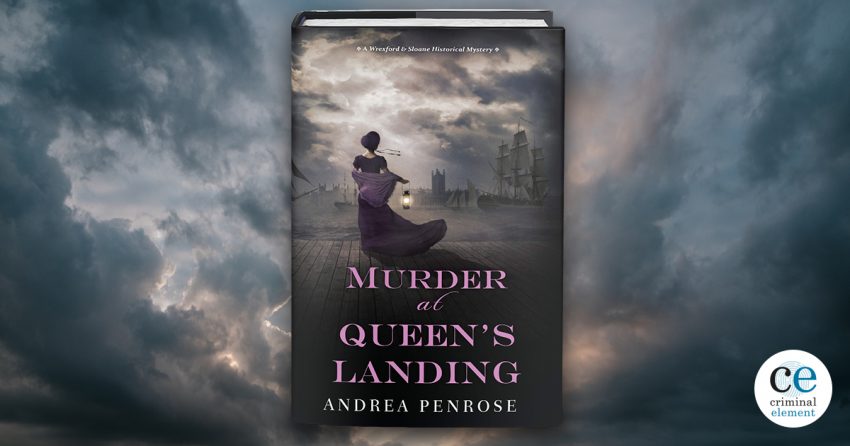 Murder at Queen’s Landing marks a sea-change for the series. Much has changed since readers first met the Earl of Wrexford and Charlotte Sloane. Charlotte’s secretive livelihood is no longer front and center, as it was in the first three mysteries.

Charlotte Sloane’s secret persona as the “controversial satirical cartoonist A.J. Quill” is known to her partner in crime detection, the Earl of Wrexford. Understandably, a creator of “scathing political cartoons” works behind a pseudonym. Furthermore, the haut ton would never recover if it became known that Quill, that skillful skewer of hypocrisy, is a woman.

Charlotte, an earl’s daughter, left her aristocratic life behind when she eloped with an impecunious artist. After her husband’s death, she assumed the mantle of A.J. Quill, her husband’s creation, in order to support herself. For reasons that are explained in Murder at Kensington Palace, Charlotte makes the momentous decision to allow her great-aunt Alison to sponsor her belated debut. What could be more high profile than a society ball? The Earl of Wrexford, her first dance partner, senses Lady Charlotte’s anxiety.

Charlotte didn’t need to look around to know all eyes were upon her. It felt as if dagger points were dancing over every inch of exposed skin.

“Must I?” She let out a ragged exhale, and the knot in her belly suddenly loosened. Leave it to Wrexford to say something so spectacularly outrageous that she couldn’t help but smile.

Of course life isn’t all beer and skittles, or in the case of a society soiree, champagne and lobster patties. Desperate for a respite, Charlotte leaves the ballroom in search of a quiet anteroom and unexpectedly stumbles upon a disheveled Lord Woodbridge and his sister Lady Cordelia. Unbeknownst to the siblings, who she knows well, Charlotte overhears their heated conversation.

Through her street contacts, Charlotte learns a clerk at the East India Shipping Company has been found murdered at Queen’s Landing. Street-smart Skinny says, “Word is, his throat was sliced open from ear to ear.” Who was he?

Oiy, Alice the Eel Girl heard from Pudge that he was a . . . a clerk.” His voice scrunched in thought. “Wot’s a clerk?”

“A man who keeps all the records organized for a company. He writes down all the business information and makes copies of all the letters sent and received,” explained Charlotte.

“Sounds boring.” Skinny rubbed at a gob of mud on his sleeve. “Are you and His Nibs gonna solve the murder?”

Charlotte felt a twinge of guilt. Much as she mourned the passing of any living being, she couldn’t find justice for all of them.

London was a large city, and murders were a grim reality of its everyday life. The heartless truth was, only those that involved a prominent person or touched on a juicy scandal were of interest to the public who purchased her prints.

Striving for justice is a theme that consumes Charlotte and Wrexford. It turns out the clerk’s death is just the tip of the iceberg to a convoluted plot involving corrupt insiders with no compunction at involving and blackmailing naïve outsiders to help them achieve their goal.

When Lady Cordelia, a brilliant mathematician, and her brother, Lord Woodbridge, disappear from London, rumors swirl concerning fraudulent bank loans and a secret consortium engaged in an illicit—and highly profitable—trading scheme that threatens the entire British economy. The incriminating evidence mounts, but for Charlotte and Wrexford, it’s a question of loyalty and friendship.

It’s also a question of loyalty for her adopted sons, Hawk and Raven, aka The Weasels. Lady Cordelia is Raven’s math tutor and Charlotte shares that Lady Cordelia didn’t show up for her tutoring session, which seems quite odd.

Although Wrexford and Charlotte are the heart of the series, their world has expanded over time. They have employees who are also forthright friends, like Charlotte’s housekeeper and friend McClellan, with her uncanny ability to judge when ginger biscuits might be needed. Where pray tell is that recipe? Wrexford’s valet and laboratory assistant Tyler never hesitates to speak honestly to the earl. Charlotte’s relationship with her great-aunt Alison reminds me very much of the bond between Lady Charlotte Pitt and her great-aunt, Lady Vespasia Cumming-Gould (see the Charlotte and Thomas Pitt series by Anne Perry). During Murder at Queens Landing, Charlotte divulges her secrets to her great-aunt. And then there are the Weasels, Charlotte’s adopted sons. Elizabethan Francis Bacon wrote, “He that hath wife and children hath given hostages to fortune, for they are impediments to great enterprises, either of virtue or mischief.” It’s too late for Charlotte and Wrexford, they have crossed that Rubicon. Fortunately, their “hostages to fortune” are skilled and intelligent crime-solvers.

Wrexford is so self-contained it’s hard to see cracks in his carapace. But they’re there. Sleeplessness. Whiskey. Worries. It’s the same with Charlotte. The East India Company is a formidable foe. It’s almost comical how they have each other’s back. Almost every time they venture out in the dark of night—to investigate, to meet with a source—the other is there in the shadows, sometimes joined by the stealthy Weasels. The Weasels are growing by leaps and bounds in maturity, wisdom, and knowledge, but they haven’t lost their street-smart skills.

Murder at Queen’s Landing has an intricate, fascinating plot (thank you Andrea Penrose for an enlightening afterword that marries the plot with the scientific discoveries of the time).  It also explores free-will, risk-taking versus possible consequences, and how life, if we’re open to change, can surprise and delight us.