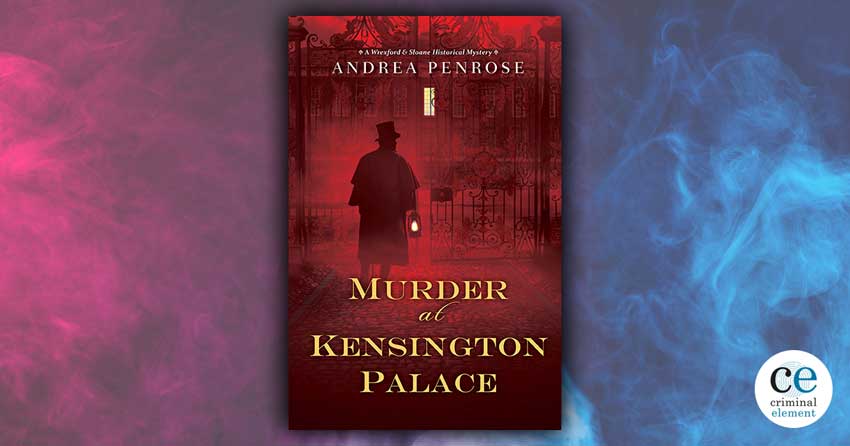 Murder at Kensington Palace by Andrea Penrose is the third Wrexford & Sloane Mystery, where Wrexford and Sloane must unravel secrets within secrets—including a few that entangle their own hearts—when they reunite to solve a string of shocking murders that have horrified Regency London.

Charlotte Sloane’s secret persona as the “controversial satirical cartoonist A.J. Quill” is known to her partner in crime detection, the Earl of Wrexford. Understandably, a creator of “scathing political cartoons” works behind a pseudonym. Furthermore, the haut ton would never recover if it became known that Quill, that skillful skewer of hypocrisy, is a woman.

Everything changes for Charlotte when “her cousin is murdered and his twin brother is accused of the gruesome crime.” The victim is Cedric, Baron Chittenden, newly ascended to the barony; Cedric and Nicholas are newcomers to London.

Tall, golden-haired, and gifted with faces that mirrored the fine-boned masculine beauty of a Botticelli painting, they were fast becoming the darlings of the Royal Institute for both their boyish charm and scientific acumen since arriving from the North to take up residence in London several months ago.

Cedric and Nicholas are overheard quarreling after they leave a scientific gathering. Cedric accuses his younger brother (by a “mere three minutes”) of “becoming a trifle too fond of brandy and wine.” Nicholas tells Cedric he’s “treading on far more dangerous ground than I am,” before stalking off. When Cedric doesn’t respond to his accusation, Nicholas fires back, “Then you may take your lordly lecture and shove it back down your gullet.”

Charlotte’s wards, Hawk and Raven, once homeless and now living under her wing, tell her the Bloody Butcher has murdered another victim—this time a “titled toff.” The crime is so heinous, “the Bow Street Runner puked all over ’is boots.” Why?

“Because the Butcher cut off one of the gent’s bollocks!” finished Raven.

Holy hell. Though rarely shocked by man’s viciousness toward his fellow man, Charlotte felt the blood drain from her face.

Charlotte needs to find out more because the public has an “insatiable appetite for scandal and depravity,” and who better “to trumpet all the juicy details” than A. J. Quill. Lilly, one of Charlotte’s army of spies on the street, told the boys she heard the news directly from a gardener who discovered the corpse.

“Kensington Gardens,” replied Raven. “The Duke of Sussex had a fancy party for some visiting men of science from Prussia last night at the Palace.”

Science. The word stirred a pricking at the back of her neck.

“Word is,” continued the boy, “the victim looks to be one of the guests. But Lilly said Bow Street’s being tighter than a flea’s ars—” He stopped and flashed an apologetic grin. “This is, the Runners are being closemouthed about any further details.”

Charlotte’s collaborator, Lord Wrexford, has the entrée denied to Charlotte into “the highest circles of Society.” He’s also a passionate devotee of science. During their most recent case, Murder at Half Moon Gate, Wrexford learned of Charlotte’s secret profession, and they came perilously close to developing a personal relationship. She’s reluctant to call on him for help. Needs must, however, and she sends the boys to Wrexford’s residence with a note.

As a rule, she tried not to brood over a decision once it was made. Noli respicere—don’t look back. But much as she tried to return her thoughts to her unfinished sketch of the Prince Regent’s latest peccadillo, she couldn’t keep from asking herself whether it was wise to get involved in another murder with the earl.

Wrexford has a good working relationship with Mr. Griffin, a Bow Street runner with an excellent reputation. Over tea, Wrexford passes on the details Griffin imparted, like where the body was found and how he was killed, down to what was sliced from his body. The earl, no stranger to false accusations of murder, is relieved that he “can’t be accused of having any connection to the fellow,” since he hadn’t met him.

She began adding sugar to his cup. “Is the identity of the victim known?”

“Yes. He’s a young gentleman from the North by the name of Lord Chittenden.”

The spoon slipped, sloshing hot tea over her fingers.

“A baron from the Lake District,” the earl went on. “Apparently, he had only recently come into the title …”

A strange buzzing rose in Charlotte’s ears, drowning out the rest of his words.

And then suddenly the room began to spin.

Charlotte is flooded with memories from her childhood: “Cedric, Nicky, Charley—a trio bent of devil-may-care mischief in those long-ago carefree summers.” The British public holds aristocrats accused of murder in special contempt, so it’s not surprising that Nicholas is imprisoned in notorious Newgate Prison. Feverishly searching for proof of Nicholas’s innocence, Charlotte sets out at night, disguised as a young ramshackle man known as Magpie, to interrogate her street team: Broad Billy, Lilly, dressmakers, street-sweepers, all the unnoticed eyes and ears of the city.

It’s not enough; to prove Nicholas did not commit fratricide, Charlotte is forced to re-enter the world of her birth. Only Wrexford knows that she is Lady Charlotte Sloane, “the daughter of an earl, who had tossed away a life of privilege and comfort to elope with her drawing master.”

Andrea Penrose masterfully weaves the numerous plotlines of Murder at Kensington Palace into a scintillating whole. It’s a pleasure to watch the former guttersnipes Raven and Hawk transform themselves into gentry-coves (Regency slang for gentlemen). Bright boys, their abilities in scientific deduction (Raven) and acute observation (Hawk) serve the cause of proving Nicholas’s innocence.

Charlotte’s decision to re-enter society so she can sleuth in the ballrooms and salons of society is not an easy one, but as she reminds herself, “Virtus tentamine gaudet—strength rejoices in the challenge.” Murder at Kensington Palace is a challenging story, replete with scientific discoveries and challenges of the time, but it’s grounded in loyalty, persistence, and courage.