Book Review: Edgar Allan Poe and the Empire of the Dead by Karen Lee Street 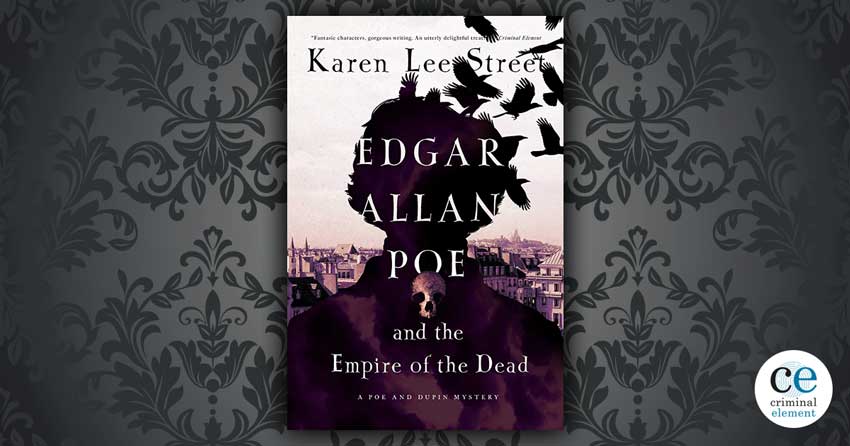 Edgar Allan Poe and the Empire of the Dead by Karen Lee Street is the third novel in the Poe and Dupin series, a thrilling historical mystery about mesmerism and magic, the shadows of the past, and the endurance of love.

Poe and Dupin were last together in Philadelphia in 1844. In June 1849, Poe, now a widower, receives a plea from his partner in detection, the Chevalier C. Auguste Dupin, to come to Paris. Poe; his mother-in-law, Muddy; and his beloved cat, Catterina, are haunted by memories of Poe’s late wife, Sissy. Dupin’s missive may come as a relief.

Enclosed you will find a ticket to sail on the twenty-seventh of June, from Philadelphia to Le Havre. I have made some discoveries that I believe will enable me to receive justice for all I have endured. With your assistance, I will at last prevail against my nemesis.

May I also suggest that you bring the letters. You know the ones of which I speak—your legacy. I have information regarding the whereabouts of the man who wishes you ill and believe the letters will prove useful.

Although it is not necessary to have read the earlier books in the series to enjoy this one, some background might be useful. As Poe says:

While I did not fully support my friend’s desire to end the life of his foe, it was not difficult to understand why he so despised him, for Valdemar had sent Dupin’s paternal grandparents to the guillotine, had murdered his mother and provoked the death of his father.

Their first morning together in Paris, Dupin fits them “out like frontiersman” and refuses to divulge their destination. Poe is disturbed, noting “accouterments” like “phosphorus matches, a collapsible lantern and several candles.” Mystifyingly, Dupin’s bag also contains “a rolled-up length of rope, a ball of twine, a compass and a small oil lantern.” They enter a library that was once the property of Cardinal Mazarin and walk by many intriguing, dusty treasures, finally stopping in front of a bookcase decorated with an image of a carved owl “camouflaged by leaves.” Dupin presses firmly on the owl.

The bookcase pivoted inward and revealed a narrow opening in the wall behind, leading to a wooden staircase that curved down into the heart of the building.

After Dupin shuts the door behind him, all light is extinguished. Poe accusingly asks where they are, for this is no library cellar. Dupin says they’re in the tunnels that were once the source of the limestone that was used to construct Paris’s iconic masterpieces.

“A subterranean city exists beneath Paris, tunnels mirroring the streets above, mysterious chambers carved out beneath our most noble buildings.”

The “Empire of the Dead” is a poetical name for the catacombs of Paris, which form part of the “treacherous tunnels of the city’s necropolis.” Dupin is at ease and confident as he strides through the tunnels.

Imagine that you are looking at Poe’s world through a Victorian stereoscope, aka viewfinder. Historical happenings, places, and events are brought to life. While visiting an infamous Parisian “salonnière” at the request of “the prefect of police,” Poe engages in a poetry slam, choosing to recite the haunting “Annabel Lee.” Edgar Allan Poe is like a medium or sponge, highly receptive to his surroundings, which are of paramount importance because he is deeply affected by the atmosphere, smells, and food.

Welcome to the Bal des Victimes, where the only credential needed for entrée is proof that you are one of the “descendants of Madame Guillotine’s victims.” The Chevalier C. Auguste Dupin is an authentic descendant, whereas his friend Edgar Allan Poe enters using forged papers. It’s Saturday night in Paris, 14 July 1849. It’s ironic that the Bal is held on Bastille Day, the National Holiday of France. Street’s description of the event is breathtaking.

When we passed through its arch, we were transported into another world, magical, sublime. It was a vast, walled night garden filled with pale flowers and foliage that shimmered in the light cast off by the quarter moon above us. It was exquisitely arranged and enhanced by pale moths of various sizes sailing amongst the blooms. The walls were covered with night jasmine, moonflowers and honeysuckle, and white roses cascaded over arches that were placed to direct the eye to a flower bed or to frame a bench. Casablanca lilies, gardenias and tuberoses scented the air, along with night gladiolus and flowering tobacco.

It is a feast for all the senses; Karen Lee Street is a painter with a palette of exciting, unusual, and provocative words.

The line between life and death is thoroughly blurred in this tale. For readers unfamiliar with Edgar Allan Poe’s life, he was born in 1809 in Boston and died under mysterious circumstances in Baltimore on October 7, 1849; he was a “short-story writer, poet, critic, and editor who is famous for his cultivation of mystery and the macabre.” His wife, Virginia Eliza “Lissy” Clemm Poe (née Clemm), was born in 1822 and died tragically in 1847, at only 24 years old, after suffering from tuberculosis for five years. Poe’s life and work were inexorably altered by his wife’s debilitating disease.

Her struggles with illness and death are believed to have affected his poetry and prose, where dying young women appear as a frequent motif, as in “Annabel Lee”, “The Raven”, and “Ligeia.”

It is noteworthy that C. Auguste Dupin is Poe’s fictional creation and “the original model for the detective in literature.” Edgar Allan Poe and the Empire of the Dead is a historical mystery that will entice readers into exploring Paris’s magical, mysterious past and will no doubt eventually lead them to revisit Poe’s literary masterpieces.