Review: Edgar Allan Poe and the Jewel of Peru by Karen Lee Street 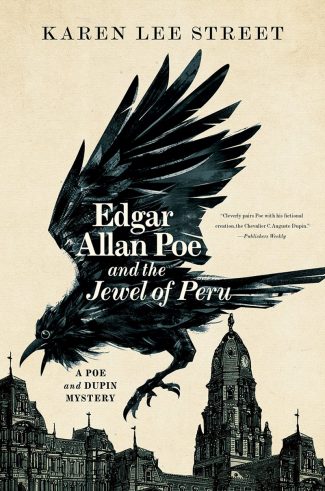 Edgar Allan Poe and the Jewel of Peru

If you love everything Poe (which I do), you’ll enjoy this lush, ornithological mystery set in 1840s Philadelphia. Poe is still reeling a bit from the events of Edgar Allan Poe and the London Monster when he gets hit with a bit of a one-two … three and four punch. First, he receives a package containing a tin hatbox with three taxidermied crows inside, and it’s sure that they’ve come from his London nemesis, George Rhynwick Williams. Next, the wife of George Rhynwick Williams—who he knew as Mrs. Fontaine but is billed as Mrs. Reynolds—turns up in a local production of The Vengeful Spector at the Walnut Street Theater. In spite of her heavy makeup, Poe recognizes her and is astonished when she invites him and his wife, Virginia—who goes by Sissy—backstage after the show. It’s then that Mrs. Reynolds asks that the feud between her husband and Mr. Poe ends and reveals, after removing her makeup, a horrifying visage that she is desperate to conceal. Sissy assures her that any quarrels between the two are forgotten, and Sissy and Poe—who is a bit dazed by the whole affair—leave for home.

Poe then receives horrifying packages: one containing a rectangular glass box with what looks like a miniature grave inside and one with a small wooden table with tiny knives and other sharp implements arranged upon it. The final nail in the coffin, appropriately, is a package he receives on Valentine’s Day with a small effigy of a dead man, modeled in wax. His good friend Father Keane shines some light on Poe’s strange new gifts:

“Quite marvelous,” he declared. “The feathers are genuine, the proportions perfect. They look as if they might take flight.”

“Indeed, for they are all in one piece, unlike the dismembered creatures delivered to me,” I said.

Father Keane nodded, unperturbed. “You are meant to see that connection and understand that she same person sent both packages.”

“I would hardly presume otherwise, given the peculiar—nay, sinister—contents of each,” I muttered.

My friend did not seem to hear my words, so engrossed was he in the construction of the miniature bird. He had been equally intrigued by the ominous creatures that were first delivered to me, and had, back in mid-January, arranged the bird parts on his desk with large, gentle hands.

“Very neatly done,” he had commented.

“The … dissection?” I had not known what else to call it.

“The taxidermy work. One would hardly know the creatures to be dead if they were not left unassembled.”

“Indeed, I had feared them to be alive when I first opened the bag.:

“An unusual thing for an experienced taxidermist to do, to leave his work so patently unfinished.” He had look to me as if expecting an explanation.

After more discussion, Father Keane suggests that it is a diorama that is meant to be constructed, noting that the painted mountains are labeled “Chachapoyas,” which is a Peruvian mountain range. Of course, all this does is cause further confusion for Poe since he’s never been to Peru or anywhere in that region.

Father Keane is convinced that the diorama is pointing to a murder that must be prevented—but who is the victim?

When he receives another package containing what he’s sure is a miniature of his wife cloaked in funereal garb, he’s horrified. It’s only when his benefactress (he edited her ornithological treatise), the unusual Miss Helena Loddiges, arrives at his home that it seems an explanation may be imminent. She is there to ask for Poe’s assistance in solving the murder of her father’s bird collector, Andrew Mathews, and his son, Jeremiah. Andrew died in a fall, and Jeremiah met his own premature end right there in Philadelphia, soon after a bird collecting trip for her father. Supposedly, he fell to his death from a ship right before he was to sail to London. The tale she tells is a fantastical one, and it includes a sighting of Jeremiah after his death.

“The following night all was made clear to me when I awoke to see Jeremiah,” she continued. “The draperies were parted, the room dimly lit with moonlight—and there he was, standing in the doorway to my room.

“ ‘Jeremiah!’ I cried out. ‘We were told you had drowned!’ When I spoke, shadow seemed to envelope him, and I realized with an aching heart that it was him in spirit only. ‘Don’t go,’ I said. ‘Do you have something to tell me? Some message?’ The moonlight seemed to grow stronger, dispelling the shadow, and he was there again.

“ ‘What jewel? What do you mean?” But the moonlight faded, and I could not see him. I left my bed and made my way to the corridor, hoping to find him there, but it was empty. I went through the entire house calling his name, but Jeremiah had vanished,” Miss Loddiges concluded, her green eyes fixed upon me.

Poe agrees to help the eccentric Miss Loddiges (who also happens to be an exceedingly skilled taxidermist), and Sissy is eager to get in on the act, much to Poe’s chagrin. Her health is delicate, and he’ll do anything to protect her. However, there’s nothing wrong with her spirit, and he reluctantly accepts her help. At first, it seems a matter of chasing clues and scouring old texts, but when Father Keane is murdered, the investigation takes on a new urgency.

Karen Lee Street peppers her complex plot with cozy details about Edgar and Sissy’s marriage and their warm relationship with her mother, who they call Muddy, as well as detailed excerpts from explorer’s journals from Peru and ornithological texts. It’s a daunting investigation, and Poe soon sends a letter to his dear friend the Chevalier C. Auguste Dupin—who, of course, is Poe’s own creation, first appearing in “The Murders in the Rue Morgue.” Street playfully comments on this after Dupin appears at Poe’s home, in a passage that actually made me laugh out loud in delight:

“And this is my mother-in-law, Mrs. Clemm,” I said, indicating Muddy, who was staring at Dupin with ill-concealed astonishment.

“My word, Eddy,” she muttered, looking from me to Dupin and back again. “He might be your twin.” Unease deepened the lines on her face and she shuffled back slightly as if Dupin were an unpredictable dog.

And she again poked a bit of fun in this passage:

“Please, make yourself comfortable,” Sissy indicated my chair, which faced her own. “It’s frightfully cold tonight.”

Dupin did as he was bid and stretched his feet toward the crackling blaze. It was then, as the soft amber light glimmered over his features, that I understood why Muddy had reacted with such consternation, for my friend was seated directly beneath the portrait of me and one would be forgiven for thinking it was his replica rather than mine. Indeed, every element of the portrait that I thought a poor depiction of me in flesh and spirit was a perfect reproduction of Dupin.

What exactly is the jewel that Jeremiah spoke of? The investigation won’t be without its trials, but if anyone can solve the mystery, the indomitable Dupin and Poe are up to the task.

Come for the mystery, stay for Street’s fantastic characters, gorgeous writing, and oodles of atmosphere. This is an utterly delightful treat that’s not to be missed. You’ll certainly get more out of the series if you start with Edgar Allan Poe and the London Monster, but you can certainly jump in here without much of a hiccup.