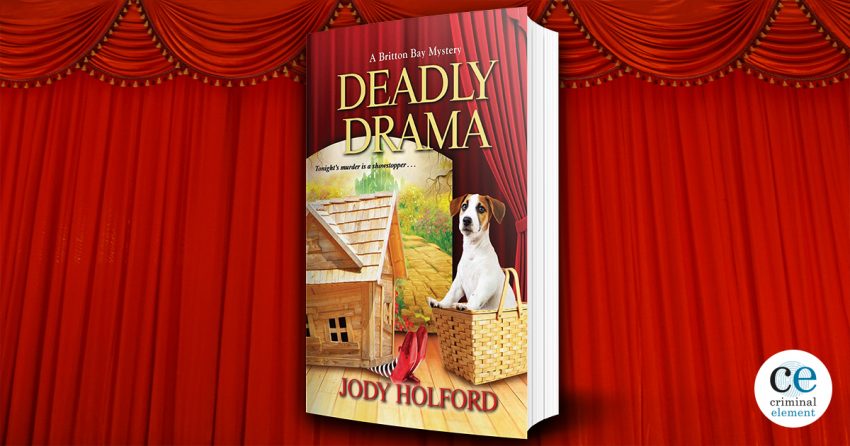 A popular trope in cozy mysteries is “Let’s put on a show.” The spring community theater production of The Wizard of Oz is, surprisingly, Britton Bay’s inaugural play. All the parts are being filled by local thespians, but the out-of-town director’s reputation precedes her.

It turns out former soap opera actress Magnolia Sweet is anything but; nothing’s worse than a has-been on a power trip, and steely Magnolia routinely chews out her amateur cast.

Deadly Drama is the 4th Britton Bay mystery in the series. Peripatetic army brat Molly Owens with few expectations moved to Oregon’s fictional town of Britton Bay, located on Oregon’s scenic coast. She had a rootless past but she’s put down major tendrils in Britton Bay. Molly is the editor-in-chief of the Britton Bay Bulletin, she’s living with her beau Sam, and to the dismay of the local police department, murder seems to seek her out. The descriptor “amateur sleuth” is another string to Molly’s bow.

Is there a story more familiar than The Wizard of Oz? Maybe A Christmas Carol. Molly Owens is determined to interview director Sweet but it’s a hard get. Sweet is so elusive…she keeps putting off the Fourth Estate. So says Jill, one of Molly’s employees:

“Speaking of which, I’m helping Sarah and some of the others with the set tonight, so I can check in with the director about an interview.”

One side of Jill’s mouth tilted upward. “Good luck with that. Magnolia Sweet is not an easy woman to pin down and even when you do, she’d rather tak about her glory days as a Hollywood starlet than answer a question directly.”

It’s all-hands-on-deck to create the intricate sets. Molly’s artistic friend Sarah shares the highlights, both women looking upward: “Sarah stood beside her and pointed. ‘That’s the house that kills the witch.’” Molly returns to the rec center the next day, crossing her fingers she’ll be able to interview Director Sweet, but something is off-kilter. The house is on the stage sitting at a slight angle, and the rec center custodian Judd is leaning over Magnolia’s body.

Magnolia’s feet were jutting out from the bottom of the house, the rest of her body inside. Molly saw her eyes were closed and her arms were bent, like she’d been holding them up by her head. Molly stepped back, shaking her head even as Judd started to rise, tears in his eyes, and she realized, with a tiny bit of physical distance, that if the door were shut, the only thing someone in the audience would see was a pair of boot-covered feet. It was a horrifying image of life imitating art, the house on top of the Wicked Witch of the East. Or, Britton Bay, in this case.

A hallmark of a cozy mystery is that folks die but for the most part they’re not an integral part of the close-knit community and/or nobody likes them. An exaggeration to be sure but Magnolia Sweet, with her imperious ways, was not particularly popular. Which is not to say that Molly won’t pursue all leads.

Inexplicable deaths and sleuthing notwithstanding, Britton Bay is an enviable community. It has a plethora of restaurants and cafés, hometown pride in spades, and in an unobtrusive way, looks after its own. As in Lorna Barrett’s Handbook for Homicide, homeless people are helped and not ignored, and their contributions to civic society are valued. Molly has benefited in the past from the observations of Corky Templeton, a local homeless man, living on the streets of Britton Bay. She’s worried when restauranteur Calli tells her Corky is missing.

“He hasn’t been in here in over two weeks. He comes every morning for coffee. Coffee here, day-old muffins from Bella—he won’t take the fresh ones. I know he wanders and he’s gone days in a row before without showing his face. But I can feel it in my bones. Something isn’t right.”

Life in Britton Bay isn’t perfect: Molly faces occasional challenges to her friendships but bottom line, there’s an expectation of good-will and respect. She is at the helm of a newspaper that gets printed once a week—somehow the digital world stops at the edge of Britton Bay. Molly is a nurturing, thoughtful editor who empowers her staff. Hannah, the owner’s niece, has a talent for seeing the deeper stories that lie behind the headlines—Molly is her biggest supporter, holding the presses when warranted.

Molly nodded, glancing at the time on her phone. They needed to get going on the layout, but everyone needed to hear the story. They were going to print it in the paper. Happy endings didn’t happen nearly enough in real life.

Molly feels lucky to have landed on her feet in Britton Bay—an occasional happy ending being the icing on the cake.

Now, she saw the benefit of having a tribe of people; of having an extended family and network of people who mattered. She couldn’t imagine her life without any of them.

We may be social distancing in our real lives, but in our fictional forays, Britton Bay is a hospitable community that opens its arms to all of us. I’m looking forward to more small-town adventures in Britton Bay with an ever-expanding cast of characters.