July 23, 2020
In the latest cozy mystery in the Booktown series, Tricia Miles must swim against the tide to catch a killer when Haven’t Got A Clue’s assistant manager is accused of murder. 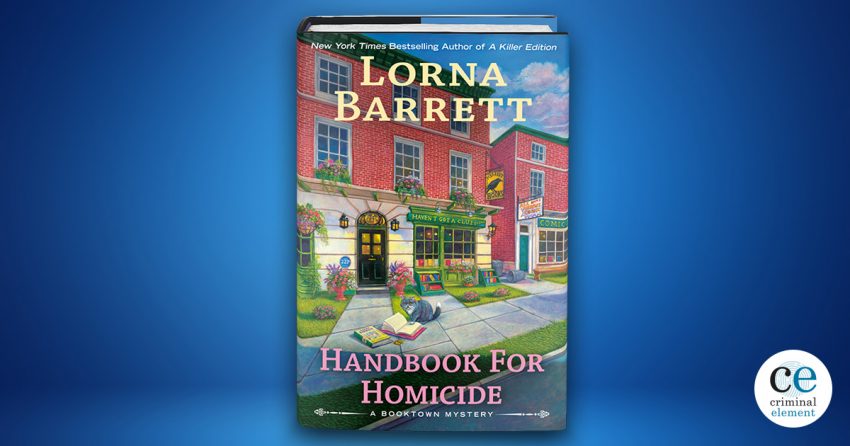 After an Irish vacation, Tricia Miles and her quasi-boyfriend Marshall Cambridge are back in Stoneham, New Hampshire. The trip was a dud. It was a working vacation for Marshall, who was leading a tour of elderly travelers, and he was never off the clock.

Back at the Haven’t Got a Clue Bookstore, Pixie Poe, the assistant store manager, brings her up-to-date. Everyone saw Tricia’s interview with the local cable station: “They’d featured the store as well as Tricia’s prized collection of vintage mysteries.” Anything else? “One teeny problem,” Pixie ventures, “someone tried to break into the store.” Unsuccessfully, thank goodness. Time for a cup of tea and a snack. Pixie goes out to empty the overflowing trash bin but returns right away, pale and shaky. The air in the alley stinks—is there a dead animal in the dumpster?

Stoneham’s police chief, Grant Baker, turned his stern gaze on Tricia. “How long did it take after your return home before you found your latest stiff?”

“Hey,” Pixie protested. “Have some respect. That’s a dead lady you’re talking about.”

Baker ignored her and continued to stare at Tricia. Mr. Everett had returned from the bank and stood a discreet distance from the trio looking quite upset, but Tricia had to attend to Baker before she could reassure her friend and employee.

“For once, it wasn’t me who found a corpse. It was Pixie,” Tricia said, feeling just a little irritated.

Baker turned his attention to Pixie. “And?”

“Well, I was taking out the trash, when I smelled that awful smell,” she said rather sheepishly.

“And did you know what it was?”

“Yeah. I’ve smelled that stink before.”

She was once an EMT and her crew was often summoned to crime scenes. Pixie says that she and the dead woman, Susan Morris, were acquaintances, hanging out occasionally at the Milford laundromat. She had given Susan the penny loafers. Lastly, she shares that Susan lived in her car.

“Why would she have to live in her car?” Tricia asked.

“Because she couldn’t afford an apartment. But she did okay. She paid her car insurance, had a PO box for her mail, and stowed everything she needed in her Toyota Camry.”

Taking people at face value and walking a mile in their shoes can be challenging. Tricia can’t imagine paring down her life to what could be stored in a car. How could Susan survive living like that? Pixie offers some insight to Tricia:

“It’s just what you do when you’re broke. I lived in my car for six months between stints in the big house,” she admitted.

Tricia cringed inwardly. Pixie had a criminal record longer than both of her arms. Did she really need to remind Baker of that when she’d just found a dead body?

Tricia’s paltry vacation after-glow is short-lived. Pixie is a former sex-worker and although her crimes weren’t violent in nature, she’s worried that Susan Morris’s murder will be pinned on her. Tricia sets out to investigate Susan’s life, determined to catch the real murderer.

Susan Morris was a Navy veteran whose career petered out after she testified against several higher-ranking officers in the aftermath of the Tailhook scandal. Tailhook was particularly egregious, “drunken naval and marine officers camped out in a narrow third-floor hallway, luring female naval officers—and even some civilians—into what was called ‘the gauntlet,’ where eighty-three women and seven men were sexually assaulted.” Tricia wonders how it impacted Susan. She didn’t have to live out of her car, her daughter wanted her mother to live with her, and she was working her way out of homelessness. Her employer at the Sweet As Can Be Candy Store is heartbroken to lose her, noting that the customers all loved her.

Lorna Barrett’s take on homelessness and second chances is empowering. Sadly, in the weeks before her murder, Susan applied for a grant from Mr. and Mrs. Everett’s charitable foundation for first and last month’s rent. Philanthropy is shown in myriad ways in Handbook for Homicide; Pixie giving Susan penny loafers, the generosity of the Everett’s, and Tricia’s sister Angelica’s sizable secret fund that gives Stoneham a firm financial foundation.

A shout-out to Tricia Miles, a middle-aged woman living her best life. Who wouldn’t enjoy joining her and Angelica for their daily martini? The town is rooting for Marshall, her beau-with-benefits, but Tricia is somewhat tepid, possibly because she’s carrying a flag for her former lover, the chief of police. The townspeople think the curious bookseller is a magnet for murder.

Can’t find Stoneham on a map? It’s about five or ten minutes down the road from lovely Milford, NH. Stoneham is known as “Booktown” (hence the name of the series), and consists of many used bookstores.