April 27, 2021
In the second installment of the Ella Shane Mystery series by Kathleen Marple Kalb, Ella's opera company manages to attract adoring crowds, rave reviews, and a killer who's a real showstopper... 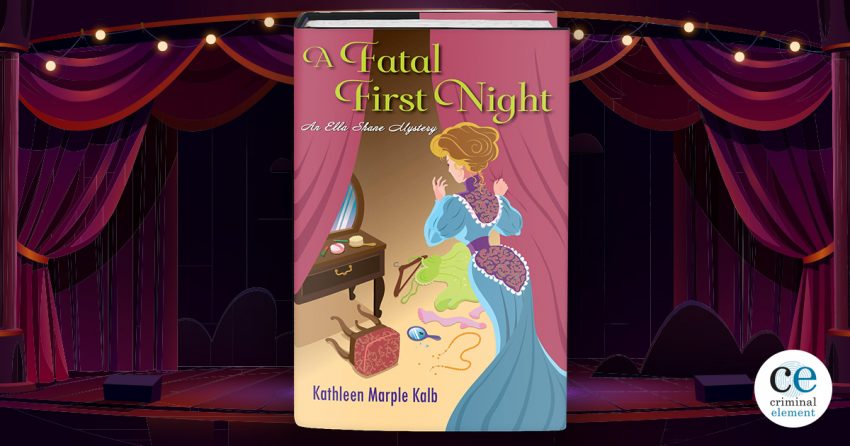 The events described in the second Ella Shane mystery novel follow closely on the heels of the first, as our heroine and her New York City-based operatic company are premiering an original new work, The Princes In The Tower, based on the tale of the two English princes who disappeared while in the custody of their uncle Richard III. With two brilliant female leads taking the roles of the princes, the show is bound to attract notice even before disaster strikes. A bloody corpse is found in the dressing room of their basso, Albert Reuter, and the bewildered young man is hauled off to jail before anyone can scarcely gather their wits.

As the show must go on, Albert’s understudy readily steps into his place, causing a ripple effect in backstage maneuverings that Ella must manage. She is further distracted from Albert’s plight by the arrival of her not-quite-beau Gilbert Saint Aubyn from England. In the polite society of 1899, their relationship is hemmed in by all manner of proprieties that she’s especially sensitive to given her work as a singer, which certain parties wrongly assume marks her as indiscriminately sexually available. Fortunately, Gilbert is not one of these people, which is only one of the many reasons she is so drawn to him. They had in fact been planning to meet in London when she takes the company on tour, perhaps to formally begin their courtship, so his arrival in New York comes as a surprise. More curiously, he is cagey about saying exactly why he’s there. Ella quickly discourages him from dissembling:

“Nor I to you. I assume I have the same right to leave out matters you don’t need to know?” Of which there could well be many.

“Of course. “ To his credit, he didn’t even hesitate.

Despite Gilbert’s silence, Ella strongly suspects that his visit might have something to do with the case her good friend, newspaper reporter Hetty MacNaughten, is currently covering: the sensational murder trial of Amelie Van Vleet, accused of repeatedly stabbing her wealthy husband to death. Hetty thinks Amelie is guilty, but Ella isn’t so sure. Gilbert claims that his interest in the proceedings stems from having some expertise as a barrister himself. Almost impulsively, Ella asks him to take a look at Albert’s case as well. When it becomes clear to them both that Albert was framed for murder, Ella must investigate as to whether someone in her company is a cold-blooded killer.

While this sequel to A Fatal Finale focuses less on the murder mysteries than on the relationships of our heroine and her circle of family and friends, it is another insightful look into the life of respectable artists at the turn of the 20th century. The intricacies of what is and isn’t acceptable in a courtship may seem strangely stilted to modern perspectives, but the sense of camaraderie and lack of racial or religious prejudice is refreshing. The way the company gathers for an unconventional service in honor of Ella’s Jewish faith is especially touching:

I handed the matches to Anna. Her Hebrew is far better than mine, and while I can and do manage it at home, I also enjoy deferring to her. I’m sure we’re violating any number of rabbinical laws by lighting candles to welcome the Sabbath, only to go out and perform, but this is not a traditional observance.

What it is, more than anything, is a chance to feel God in the room and share a special moment with our closest friends and family. Not even remotely orthodox, but it gives us joy and reminds us who we are. Any God I want to worship, never mind spend eternity singing for, would not be troubled by that.

As with any good historical mystery, the crimes are solved and the culprits identified with a dash of danger for our intrepid heroes. But mostly A Fatal First Night progresses Ella and Gil’s complicated romance, avoiding irritating manufactured drama—I really hate when writers concoct trust issues to advance the plot and I was so glad that this book rebuked the notion—in lieu of navigating the very real, very restrictive notions of what was proper back in the day. The next book promises a trip to London: it will be exciting to see how Ella and Gil’s relationship and this series continue to develop.