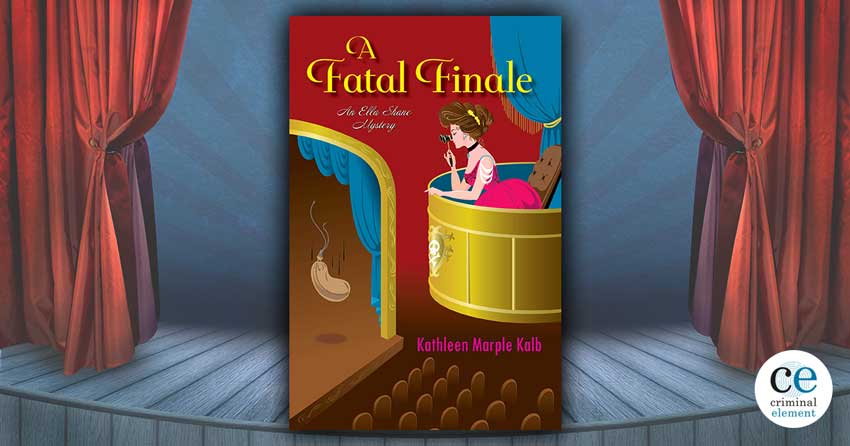 A Fatal Finale by Kathleen Marple Kalb is the first entry in the new Ella Shane Mystery series, where the opera singer is determined to decode the dark secrets surrounding her co-star’s fatal finale before the lights go dark and the culprit appears for an encore.

In turn-of-the-20th-century New York City, Ella Shane is the epitome of dashing stage glamour. As an opera star who’s cornered the market on trouser roles (male roles sung by women), she leads her own touring company—a far cry from her humble beginnings as the only daughter of an Irish father and a Jewish mother who both passed away far too soon. She’s also in her mid-30s and unmarried, having resigned herself to never finding a man who will accommodate her religious beliefs as well as her career.

Instead, she sets up her household with her beloved cousin Tommy, whose past as a championship boxer ensures her protection from most unwanted advances—of which, given her occupation, there are many. Perhaps in reaction to this, Ella has cultivated a very correct personal and professional life, in keeping with the mores of the age.

A lady who makes her living in a perhaps unladylike way must be especially vigilant as to her behavior. Particularly, when the lady in question practices a profession perilously close to that of the chorus girl, the preferred companion of many a gentleman of the world. So I err very much on the side of propriety at all times. Hence, the tea at the Waldorf.

It is true, as far as it goes, that I do not go out to dinner with men outside my family circle, if ever, and that I have no intention of becoming some swell’s pet singer. As a blunt Lower East Side girl, I might observe—of course, to myself alone—that I’m nobody’s whore. For public consumption, I put it more delicately, if equally emphatically: I am married to my art.

It is, thus, an especial horror when the latest in her company’s long line of traditional—and problematic—sopranos dies after ingesting a vial of poison on stage. The coroner rules it an accidental death, but the arrival of a mysterious duke several weeks later causes Ella to reexamine Violette Saint Claire’s demise. Gilbert Saint Aubyn claims that Violette was actually his cousin Frances who had run away from home in order to pursue her dreams of music. He asks for Ella’s help in reconstructing her final days, and what they discover leads them both to believe that foul play was indeed involved in Frances’s untimely death.

As if these investigations weren’t bringing enough turmoil to her life, Ella becomes increasingly aware of and discomfited by the growing attraction between herself and the handsome duke. She isn’t the only one to notice, though. While Tommy and the rest of her friends subject her to some gentle ribbing on the subject, it’s the attention of genteel society that throws her for a loop, culminating in a disastrous interview with a disapproving society matron who is only too happy to remind her that dukes rarely have honorable designs on divas.

Not that I had any real desire for Saint Aubyn to court me, or any idea what might come of it if he did. What hurt was the attitude that I was unworthy. Not matter what I do, no matter how well I do it, no matter how much the world changes, I’m still just an orphan girl from the Lower East Side, and there will always be someone to remind me of that fact. As I turned for my street, with the first drops of rain starting to fall from the heavy grey clouds, I could cheerfully have burst into tears myself.

A Fatal Finale is an immersive romp in the life of a Gilded Age opera singer from humble beginnings, featuring a murder mystery and a chaste romance. It sets the stage for a series that could really explore the complicated career and interior life of an independent woman of the early 1900s, with the occasional danger of investigating a murder thrown in to further spice up the proceedings.