August 16, 2021
In the second book from Isabella Maldonado following FBI Special Agent Nina Guerrera, Nina must track down a serial killer that has been hiding in plain sight for nearly thirty years. 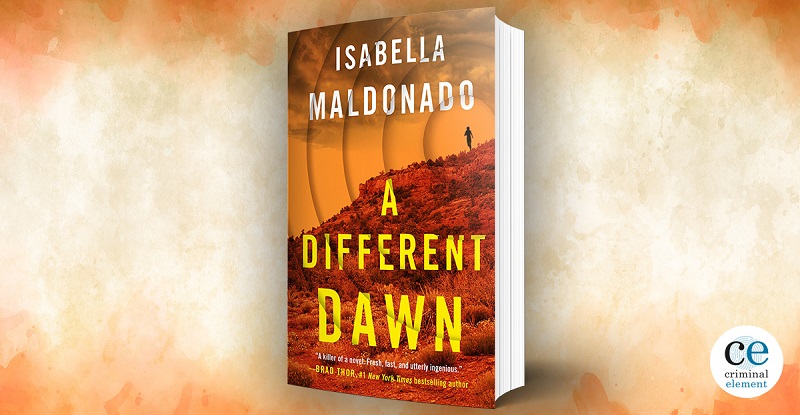 FBI Special Agent Nina Guerrera is back. Since the events of The Cipher, Nina has become a member of an elite FBI team, part of the Behavioral Analysis Unit, based at FBI headquarters. The team is helmed by Supervisory Special Agent Gerard Buxton. The other members are Special Agent Dr. Jeffrey Wade, Nina’s mentor, and Special Agents Kelly Breck and Jake Kent. Breck is a cyber-crime expert, “never without her laptop, which seemed like an appendage,” and Kent is a former Navy SEAL, an expert on team building and the psychology of predators. What a contrast to the Nina we met earlier: “The crux of The Cipher is the tension between Nina Esperanza the former victim and FBI Special Agent Nina Guerrera.” Then Nina saw herself as the quintessential independent operator, hesitant to rely on anyone but herself. She refused to see herself as a victim: she had worked too hard to remake her life.

At seventeen, during her emancipation hearing, she petitioned to change her last name from “Esperanza”, which means ‘hope’, to Guerrera. The judge presiding at the hearing asks her why.

“In Spanish, guerrero means ‘warrior’ or ‘fighter,’ and guerrera—with an a on the end—refers to a female.”

The judge took a moment to digest her words before his eyes reflected comprehension. “Warrior girl.”

That was then. Now Nina works on troubling, complex crimes, often coming under the ViCAP umbrella (Violent Crime Apprehension Program which assists with communication and coordination between law enforcement agencies). Nina observes at the start of the regular morning briefing that Supervisory Special Agent Buxton is tense and stiff, uncharacteristic for the usually phlegmatic leader.

Two manila folders rested in front of him. He tapped them with his long fingers. “If this is a pattern, it’s right up there with the most disturbing ones I’ve seen.”

They all exchanged glances. Nina waited to hear the briefing.

“ViCAP found a potential match between two triple murders committed in different cities precisely four years apart,” Buxton continued. “We’ve been tasked with determining whether they’re related and, if so, assisting with the investigation at the request of the Phoenix, Arizona, police department.”

A mother, father, and their newborn daughter were killed in their home in the middle of the night. When Nina looks at the crime scene photos she immediately asks why he labeled it a triple murder as it appears that the mother killed her family before committing suicide. Buxton proffers a chilling rejoinder: “Because that’s how it was supposed to look.” An entire family wiped out with the murder staged to implicate the mother. The scene resonates with Nina on a deeply personal level: she was one of society’s throwaways, a malnourished, scrawny baby who was discovered in a dumpster. Thrown into the foster-care system, life spiraled downward after that ignominious beginning. Nina is fascinated by Hispanic folktales, like La Llorona. According to one rendition La Llorona, or “The Weeping Woman,” is an anguished young wife who is betrayed by the husband she loves. In despair, she kills her children and then herself to show her husband the extent of her agony. The fable posits that she’s instantly remorseful but is still banished back to purgatory on Earth, where she relentlessly searches for her lost babies.

Nina could not have imagined that she would be dispatched to Phoenix, Arizona, to investigate the deceptively obvious, fresh crime scene. The team is tasked with linking this attack to another triple murder that occurred four years earlier and over two thousand miles away. They uncover a path that spirals back almost thirty years—every Leap Year, a new family died, seemingly at the hands of the mother. Nina is racked with the similarities between the crime scenes and the terrifying La Llorona folktale. The Behavioral Analysis Unit is up against a formidable serial killer. First things first—what kind of unsub are they dealing with? Wade is asked to create a profile for a “person who repeatedly murders entire families, including the most innocent victims of all—newborns.” Kent chimes in.

“He’s not schizophrenic, because this level of sophistication and planning demonstrates that he knows exactly what he’s doing,” Kent said, adding his observations to the mix. “That leaves one overriding conclusion.” He looked around the room. “Our unsub is a psychopath.”

Wade and Kent go further. Based on the initial evidence they believe they’re dealing with a person with antisocial personality disorder (ASPD). As Wade puts it, people with ASPD “truly don’t care if someone gets hurt as long as they get what they want.”

The most significant indicator in the unsub’s criminal history is timing. The first family slaughter happened on Leap Year and every four years thereafter, for decades, another family with a newborn daughter is erased. Is the unsub trying to fix some trauma from his past?

A flash of insight struck Nina. “Whatever went wrong—his point of inflection—happened on a leap day. That’s why he tries to fix it every leap day. When it doesn’t work, he has to wait another four years to try again.”

A Different Dawn is a heart-stopping journey on parallel tracks: police detection and personal. Nina’s team, dogged by gonzo reporter James Snead, painstakingly recreate a serial killer’s playbook. Concurrently, Nina is haunted by her past, particularly when she and Phoenix detective Perez uncover a welfare check twenty-eight years earlier that resulted in officers delivering a baby. NB: Maldonado inserts plenty of dark humor to slightly lighten the grim story—like Nina recalling welfare checks she made in the past: “In Nina’s experience, this often led to discovering a month’s worth of newspapers in the driveway, flies all over the inside of the windows, and a decomposing body inside. She’d left a life of glamour behind to join the Bureau.” The baby delivered by the officers was inadvertently sent home from the hospital with the family that were the unsub’s first victims. To say more would be to enter spoiler territory.

Isabella Maldonado has created an unforgettable hero in Nina Guerrera. The line from the film The Naked City comes to mind: “There are eight million stories in the naked city. This has been one of them.” Count me in as a reader who is eagerly anticipating the third Nina Guerrera story.