November 18, 2020
At age sixteen, FBI Special Agent Nina Guerrera escaped a serial killer’s trap. Years later, after a video of her fending off a would-be attacker goes viral, the man who abducted her all those years ago is watching... 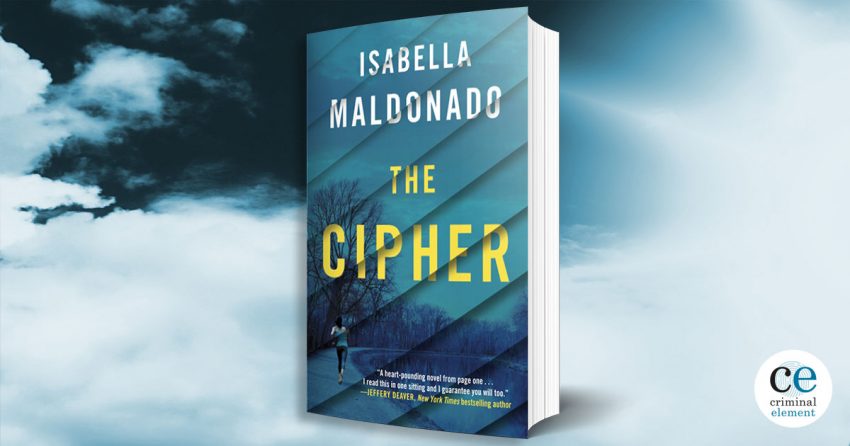 No one knows better than the FBI the cruelty and depravity of a serial killer. They absolutely have the receipts. The Cipher is a brutal, viscerally raw, no-holds-barred story that takes readers into the heart of darkness.

FBI Special Agent Nina Guerrera was abducted, tortured, raped, and discarded by a vile creature when she was only a teenager. She had no family to protect and support her: she was one of society’s throwaways. Or so her torturer thought. Unbelievably, she escaped from him. In the aftermath of her ordeal, Nina remade her whole life. At seventeen, during her emancipation hearing, she petitioned to change her last name from “Esperanza”, which means ‘hope’, to Guerrera. The judge presiding at the hearing asks her why.

“In Spanish, guerrero means ‘warrior’ or ‘fighter,’ and guerrera—with an a on the end—refers to a female.”

The judge took a moment to digest her words before his eyes reflected comprehension. “Warrior girl.”

She inclined her head in acknowledgment. “I’ve given up on hope,” she said quietly, then lifted her chin. “From now on, I fight.”

Ten years later, Nina is in a great position to fight for justice—she works for the FBI. On an afternoon run, a pair of high school thugs attempt to sexually attack her. They picked the wrong woman. Nina takes down number one who squeaks:

“Am I?” She pressed in harder, blurring his vision around the edges. “I’m all choked up about that. Here’s a thought. Don’t jump women in the park.”

He could only muster a feeble protest. “I didn’t … it was just a prank. Wasn’t serious.”

Ryan wonders where his pal Zippo is for support. Why isn’t he helping get this ferocious woman off him? Zippo is busy videotaping the whole attack. After he uploads it, it lights up the internet. She’s a street fighter par excellence, the “Warrior Girl” the judge proclaimed her to be. Unfortunately, her internet fandom brings the shadows of her past crashing into her present. Guess no good deed goes unpunished.

The man who abducted her eleven years ago is watching. Determined to reclaim his lost prize, he commits a grisly murder designed to pull her into the investigation…but his games are just beginning.

Nina is summoned to a meeting with her boss, Alex Connor, and his superior, Special Agent in Charge Tom Ingersoll. First, they share that her ballistic maneuvers in the park have gone viral. News to Nina. Then they tell her that her torturer has murdered a sixteen-year-old runaway, right in Nina’s backyard, Georgetown. Is it simply to show that he can, or is to taunt Nina with chilling messages?  There was also a note found at the crime scene. It reads:

“After years of seeking, I thought I would never have Hope again. But today, everything changed. She calls herself a Warrior now. But to me, she will always be … The One That Got Away.”

It gets worse: the note ends with “Until Now.”

The crux of The Cipher is the tension between Nina Esperanza the former victim and FBI Special Agent Nina Guerrera. The FBI desperately needs every single last detail from Agent Guerrera, but they worry that she can’t deliver and perhaps they’re asking too much from her. Learning, in minute detail, how the FBI puts together a problem-solving team is endlessly fascinating. Kudos to Isabella Maldonado for putting a spotlight on the process. The first hurdle is Nina herself—since she is the object of a crazed murderer’s quest, can she remain objective? Her captivity was particularly brutal and sexually punishing: will she be able to unlock long-suppressed details in order to aid the investigation? Part of Nina wants to just go to bed, and hope that she eventually wakes up from this nightmare. But Nina hasn’t succeeded in life by being a quitter and soon finds herself at the scene of the crime in Georgetown. Special Agent Wade, a psychologist by profession, is already there. Years earlier he proffered doubts about Nina’s ability to be successful in the FBI but that’s in the past.

Wade lowered his voice. “If any of this becomes uncomfortable, I expect you to let me know.”

She looked him straight in the eye and lied. “I will.” She was already fifty clicks past uncomfortable.

“There’s no time to be delicate,” Wade said, shifting into investigative mode. “The scene’s no longer fresh. We need any insight you can provide, and we need it now.”

What really unleashes Nina’s ability to fully immerse herself in a dangerous, ever-escalating cat and mouse chase is how much her insights and knowledge are needed as her abductor continues his fevered quest to recapture and finally master Nina under the bright spotlight of the internet.

His coded riddles may have made him a depraved social media superstar—an enigmatic cyber-ghost dubbed “the Cipher”—but to Nina he’s a monster who preys on the vulnerable.

The Cipher is a serious, absorbing descent into a serial killer’s modus operandi. It’s not for the faint-of-heart. Light (or should I say medium) relief is provided by Nina’s next-door-neighbor, Bianca. Like Nina, Bianca was once flotsam and jetsam in the foster child system, but thanks to Nina, she’s landed on her feet, cared for by the generous and loving Mrs. Gomez. The two women have a lot in common, both preternaturally bright, determined, and persistent. Bianca is a natural online, able to decipher the Cipher’s clues with extraordinary speed.

The Cipher is the first outing in the new Nina Guerrera series: I am looking forward to more adventures from Nina and her kick-butt FBI team. Who knows, maybe someday in the future, Bianca will be a member of Team Nina.