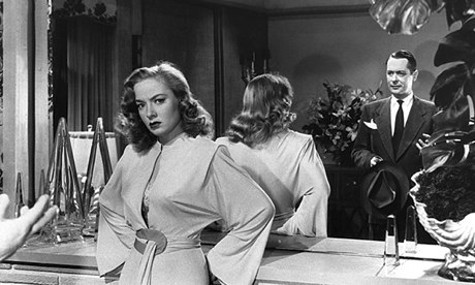 It’s a long stretch to call Lady in the Lake—the dark suspense film from 1947 that Robert Montgomery directed and starred in—a Christmas movie. But, you know, I’m not much of a holiday films buff, and I wanted to write a seasonal post for this site, so a film noir title that happens to be set around Christmastime was as close as I was going to come to getting in the yuletide spirit for this purpose.

There are some interesting aspects of Lady in the Lake that make it worthy of consideration in December—or any time of the year, really. Based on Raymond Chandler’s 4th Philip Marlowe novel, which was published in 1943, Montgomery’s film is mostly noted for its odd cinematic approach. All of the shots (except those where Marlowe—portrayed by Montgomery himself—speaks directly to the audience in asides) come via how the scenes and people are witnessed by the private eye. Marlowe is the camera. Apart from the asides, and when mirrors are part of the scenes, we hear Marlowe speak and see what he sees, but we don’t see him.

It seems Montgomery wanted to mimic the novel’s aspect of having everything and everyone viewed through the private investigator’s eyes, so he employed this peculiar method. It was Montgomery’s directorial debut, and if you watch the trailers for the film, you’ll see that MGM and Montgomery were touting it as a movie that was done in a groundbreaking way. More on all of that below. Let’s talk about the similarities and differences between the book and the film. Set between Los Angeles and a remote mountain town about 80 miles away, the basic plotline is the same in both. Yet, there are departures Montgomery and screenwriter Steve Fisher (noir heads likely recognize his name in association with his classic 1941 crime novel I Wake Up Screaming) took from Chandler’s text.

In both versions, the story begins with Marlowe being hired to track down the missing wife of a business tycoon: Derace Kingsley in the novel and Kingsby in the film. Mrs. Kingsby (let’s go with the movie last name from here on out, to simplify things) is an adulterer as well as a kleptomaniac, and she’s been missing for about a month.

Mr. Kingsby recently received a telegram from her stating that she’s crossing into Mexico to get a quickie divorce from him, then marrying the hunky skirt-chaser she’s been known to have forays with: one Chris Lavery. But Lavery’s still around L.A. He says he hasn’t seen Mrs. Kingsby for some time, and he claims to know nothing about their supposed wedding plans.

Kingsby knows all about his wife’s affairs, and he’s not looking to get her back to set their marriage straight or punish her for cheating on him; he just wants to avoid a scandal that could affect his business affairs—wants to be assured that she’s not off creating some havoc that will show badly on him. Well, that’s how it goes in the book. In the movie, it comes across that Kingsby might actually still have some romantic feeling for his wayward spouse.

So, Marlowe starts checking into things and quickly learns that there are connections between Mrs. Kingsby, Chris Lavery, and a dead woman who seems to have been in the middle of their lives. Much of what occurs during, and comes out of, Marlowe’s investigations, is the same in the book and movie, but there are some key differences that I won’t elaborate on here, so as not to spoil it.

There are plenty of details that set the film apart from the novel. For one, the timing: in Marlowe’s book it’s midsummer, and in Montgomery’s film it’s Christmastime, as mentioned above. And, in the novel, Kingsby himself hires Marlowe to look for his wife, while in the film, the shamus is initially signed on to hunt the woman down by Kingsby’s business manager, Adrienne Fromsett.

And, there’s the added touch in the movie that Marlowe is first lured to Kingsby’s business establishment—they are a publisher of pulp magazines—because he has written a crime story and pitched it to them. The silver screen version of Ms. Fromsett—the editor/business manager who plays at inviting Marlowe to their offices in relation to his literary work but really wants to hire him to look for Mrs. Kingsby—is more of a central character than she is in the book, and this is another distinction between the two versions of the story. There are also differences between the names and personalities of some of the side characters that appear on Chandler’s pages and through Montgomery’s camera lens.

However, I’m going to spend the rest of this space focusing on Montgomery’s film, as Chandler’s novel has nothing Christmasy about it and so doesn’t fit in with my (loose) angle. To get the bad news out of the way before moving on to the good, I’ll mention what I think is the film’s biggest flaw: Montgomery’s acting. He plays Marlowe all wrong.

In Chandler’s novels, and in the better cinematic portrayals of the PI, Philip Marlowe is a guy who is known for making stinging wisecracks and for putting people in their places. But in those other editions of him, Marlowe only gets edgy and cutting with others when it’s really called for. Montgomery’s Marlowe, however, has a chip (boulder) on his shoulder from the opening of the story to the ending of it, and he constantly speaks in a snapping, barking way at everybody he encounters. His character is one-dimensional, missing so many of the qualities that make him the complicated man we see him to be in Chandler’s books and in better movie portrayals of him: Dick Powell in Murder, My Sweet (1944); Humphrey Bogart in The Big Sleep (1946); Elliott Gould in The Long Goodbye (1973); and Robert Mitchum in Farewell, My Lovely (1975).

You might think that a lead character being misplayed would rule out of the possibility of a movie being worthwhile, but Lady in the Lake has a lot going for it, despite Montgomery’s bumbling handling of Marlowe. First, the technique of having the camera be in Marlowe’s eyes is effective, in my opinion. Some find this stroke to be a gimmick that quickly wears thin, but I think it’s an interesting way to see a movie’s story play out. It adds dramatic effect by allowing the characters Marlowe encounters to often have what feel like soliloquies.

And many of the actors shine. Lloyd Nolan is perfect as an embittered cop who has it in for Marlowe. And then there’s Audrey Totter, who plays Adrienne Fromsett. Totter, who is also excellent in the boxing noir film The Set-Up (1949), is dynamite here. For me, she makes the movie. With the camera right up on her for much of the film, she takes to the spotlight wonderfully. She makes a series of wild-eyed facial gestures worthy of Joan Crawford. She looks gorgeous. And her character is complex. The viewer (and Marlowe) never quite know whether Fromsett is a decent person or a manipulative, conniving woman. Montgomery’s Marlowe wants to write her off as a bad sort, but meanwhile he is falling in love with her. She seems to have something going on with Kingsby, and maybe with Lavery, and her interest in having Marlowe locate her employer’s missing wife might be suspect. But then, she might just be a good-hearted woman who has been dragged into a dangerous situation by unscrupulous others. You don’t know which, and neither does Marlowe. That guessing game is a lot of what makes the film suspenseful.

If you need your Christmas movies to actually be Christmasy and uplifting, Lady in the Lake is not the holiday season film for you. But if you’re a film noir/Raymond Chandler fan and you haven’t taken in Montgomery’s movie yet—and if things like “Jingle Bells” playing while Christmas cards are shown over opening credits and characters often talking about it being Christmastime are sufficient holiday touches to make you feel seasonal while watching—give this one a spin this month.

Check out Brian Greene's review of another noir classic: The Asphalt Jungle (1950)!