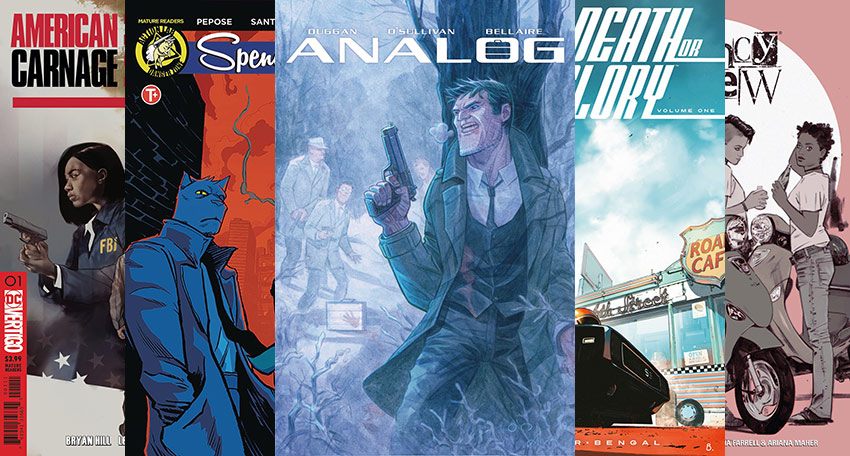 Anyone who’s followed my work for Criminal Element knows how much I love comic books. It’s a fantastic medium for telling any kind of story, especially crime tales. Comics offer the fantastic visuals and powerful acting of the best crime films but without the limitations of things like a budget. Plus, elements like mood and tone leap off the page thanks to the collaboration between writer, artist, and colorist, making each page turn suspenseful.

So if you’re a crime fiction fan, you owe it to yourself to seek out and find some crime comics. But where to begin? A lot of the major publishers like Marvel and DC focus their output on superhero tales. Also, new comics are released every week, which can make it difficult to find a jumping-on point.

Don’t worry, I’m here to help! Below you’ll find a list of six diverse and incredibly fun new crime comics with which to get started. If any of these tales are of interest, I’d recommend a trip to your local comic store (their back issues and collected editions are also available digitally). Any good, reputable store will not only get these books for you but also help you start a monthly pull list to set aside newly released issues as well as recommend other titles you might like. 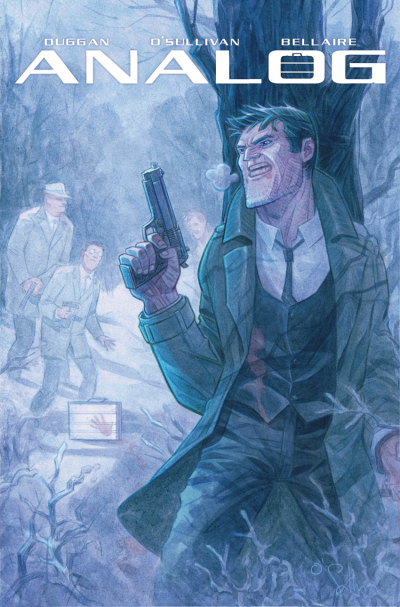 The private investigator is one of my favorite tropes in crime fiction. I love that they’re sort of knights for hire trying to find a bit of justice in a morally murky world full of powerful enemies. In their new, near-future noir series, Analog, writer Gerry Duggan and artist David O’Sullivan take the classic P.I. into a fascinating dystopian setting.

The story is set several years in the future after a devastating cyber attack has made security on the internet impossible. Freelance couriers like Jack McGinnes now deliver the secrets of powerful people. McGinnes is a sort of blend of Jim Rockford and the main characters of William Gibson’s speculative fiction novels who frequently runs afoul of and works with a fascinating cast of characters.

Four issues of Analog have been released as of this writing. A collected edition of the series’ first five issues is set for release in October.

Read an excerpt from Analog Volume 1! 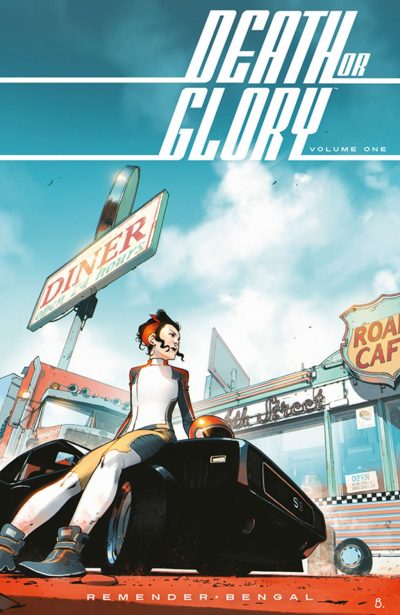 How far would you go for family and freedom? These are two of the central questions that drive Rick Remender and Bengal’s new crime thriller, Death or Glory. The series follows the adventures of Glory Owen, a mechanic and racecar driver who was raised “off the grid” by her family and a convoy of independent truckers. Glory’s father, Red, needs a liver transplant, and she has no way to pay for the expensive procedure. She decides to acquire the funds another way and uses her skills to conduct a daring heist of one of her ex-husband’s drug deals. That robbery plunges her into a horrific underworld of human trafficking and bizarre contract killers. This series features some beautiful and amazing kinetic action sequences from Bengal, especially when Glory is behind the wheel of a vehicle.

Four issues of Death or Glory have been released so far. Issue #5 is set for a Sept. 5 release. A collected edition of the first five issues will follow on October 17. 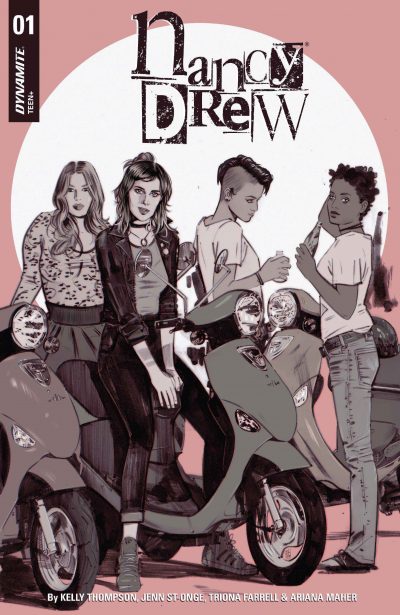 I wasn’t a big Hardy Boys or Nancy Drew reader growing up, but when I saw Kelly Thompson had written a new Nancy Drew comic series, I immediately picked it up and added it to my pull list. (She wrote the most recent volume of Marvel Comics’ Hawkeye series, which stars the new female version of the title character, combines West Coast private-eye noir with superheroics, and is fantastic.) I’m glad I did, too, because this new Nancy Drew series is great. It reads like Veronica Mars, which is what a modern-day Nancy Drew should feel like.

The art is fun but also has the perfect amount of small-town weirdness and menace, which sets a great tone. The tale is about Nancy returning to her old hometown of Bayport to investigate a very personal mystery. It also guest stars the Hardy Boys, and Nancy’s dynamic with them is pretty great.

Three issues have been released so far, with a fourth issue set for release on September 12. 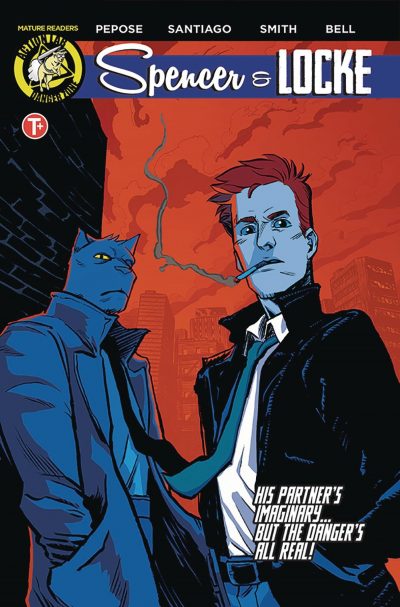 One of the fantastic things about comic books as a medium is their ability to take fun, over-the-top premises that shouldn’t work and ground them fantastic, believable characters with an intriguing story. You often see that in the world of superhero comics, but Spencer and Locke is a great example in the world of crime comics. Essentially, the premise is Calvin and Hobbes meets James Ellroy, and it works. The story follows a hardboiled police detective as he investigates a series of brutal murders with his childhood imaginary friend, a panther named Spencer. The art and tone feature a wonderful contrast between cartoony and noir.

The first miniseries is available in its entirety in collected graphic novel form. The second series will be released this winter. A feature film adaptation is also currently in development. 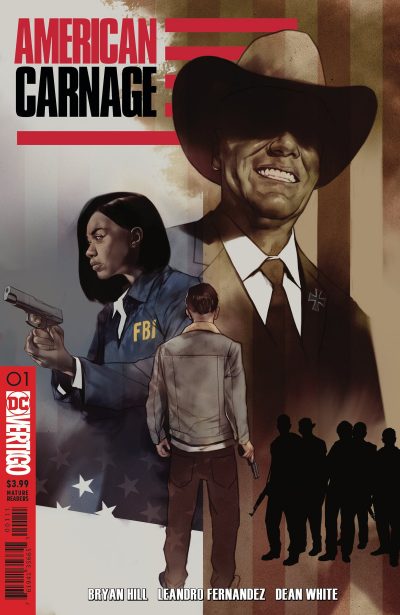 Here’s a series you can pick up right at Issue #1 since it doesn’t debut until November. Its premise is intriguing, especially if you love hard-hitting, high-tension, undercover tales. American Carnage follows a disgraced, biracial FBI agent who can pass for white as he goes undercover in a white supremacist group believed to be responsible for the murder of a fellow agent. I’m not familiar with the work of Bryan Hill, but I love Leandro Fernandez’s art, especially on Marvel Comics’ Punisher MAX series, a super-hardboiled, mature-readers take on the titular vigilante. 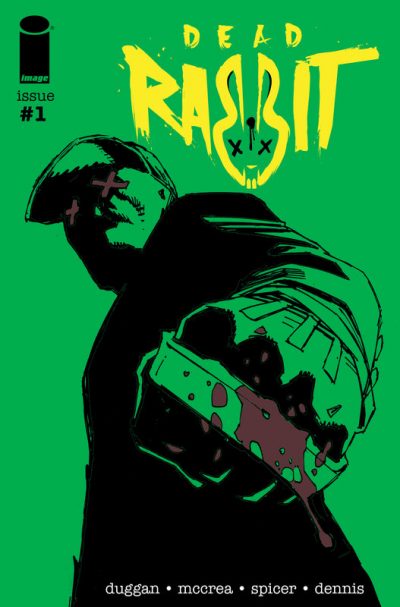 Gerry Duggan’s second Image Comic series, Dead Rabbit, begins this October. In it, he and John McCrea take a look at another classic crime story archetype: the thief. Martin Dobbs, the titular character of Dead Rabbit, was a legendary masked thief and armed robber in the 90s until he fell in love and gave up his illicit profession. He’s spent the past several years living a quiet life with his wife, but now the same love that ended his criminal career is about to plunge him back into the underworld.

Martin’s wife is very sick, and the only way he can pay for the rising cost of her medical bills is to redon the mask of the Dead Rabbit and go back to what he does best: pulling down scores. It’s a decision that will put him in the crosshairs of cops and the Boston mob.

I was lucky enough to get a sneak peek at the first three issues of Dead Rabbit and can confirm it’s a real treat for crime fiction fans. It’s got fantastic, kinetic art and a great, fast-paced story full of violence, humor, and pathos.