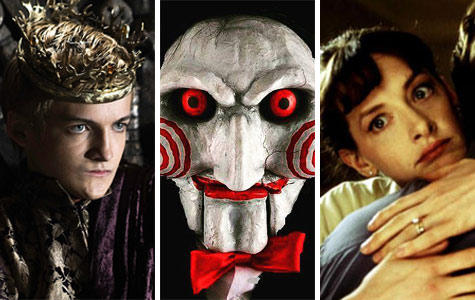 My latest thriller, Bone Music, is a story about power reversals—about victims becoming avengers and predators becoming the hunted. Blame a childhood spent watching too many slasher movies that left me with a burning desire to see the charnel house-loving monsters of Hollywood subjected to heavy doses of their own sadistic medicine.

With that in mind, here’s a list of the five killers from books, films, and TV that I most wanted to subject to their own torture devices before they claimed another life. Revenge is a dish best left to fantasy. These maniacs inspired some of my darkest.

Full confession: I’ve never seen one second of a Saw film. Fuller full confession: it was listening to a friend describe a scene from one of these films that first gave me the idea for Bone Music. Indeed, one of Jigsaw’s “puzzles” (i.e., a torture device designed to teach the person he traps inside it a profound moral lesson) disturbed me so badly that the only way I could stop visualizing it was if I invented a storyline in which my heroine kicked her way out of it and turned the tables on her captor.

Jigsaw is the most insidious kind of homicidal maniac. He is filled with a sanctimonious moral outrage that drives him to spend something on the order of six thousand work hours building his Rube Goldberg-esque implements of anguish. Into the brazen bull with you, dude. (And yes, the reason I know so much about these films is that I’m one of those people who frequently reads Wikipedia summaries of horror films I’m too afraid to see.)

Matias Solomon from The Blacklist

There isn’t a network show out there that packs the sheer wallop of NBC’s The Blacklist when it comes to delivering diabolical psychopaths week after week. Granted, they’re usually just trying to earn a living. But for them, a hard day’s work means melting down human bodies so they can stage disappearances or convincing people with terminal illnesses to commit political assassinations.

Still, on a show were the villains range from the coldly efficient to the Grand Guignol, no one made me want to leap into the screen with imaginary guns blazing quite like the smug, self-satisfied assassin Matias Solomon (expertly played by actor Edi Gathegi). He’s hardly the show’s most sadistic killer, but every time he’s onscreen, you got the sense he could justify pretty much any act of bloodshed so long as it was in his own interest.

It was my best friend, writer Eric Shaw Quinn, who first drew my attention to the deeply unnerving 1990s thriller Arlington Road and Joan Cusak’s chilling performance as a sweet-as-pie suburban housewife who turns out to be involved in some seriously nasty business. The full reveal of just what Cheryl and her family are up to doesn’t come until late in the film, and when it does, you feel oh-so-very betrayed. Cheryl was so nice. That hair! That smile! Those sweet, sympathetic eyes. How can it be that she’s a…

I won’t spoil the ending for you, except to say her final scene with Hope Davis has haunted me ever since I first watched it. There’s not a drop of blood or even a scream in it, but it’s subtly terrifying in a way you’ll never forget. And it still makes me long for a time machine so I can go back and prevent her sweet neighbors from falling into the maw of her heartless machinations or, better yet, trap Cheryl in her own basement until her true, murderous self emerges for any visitor to see. She’s undeniable proof of Shakespeare’s old adage that “one may smile and smile and be a villain,” and I want to punish her for it.

Nobody writes terror-filled crime thrillers like author Meg Gardiner. Since her books are so suspenseful, I won’t spoil too much about the killers involved. But I will give her a special tie vote because, in two of her Evan Delaney novels, she delivered baddies so disturbing and infuriating I wanted to jump into the pages and fight them to the death.

First up, the diabolical clan of religious bigots in China Lake known as The Remnant. Think Westboro Baptist Church on some really, really bad speed. Then, there’s the despicable and sadistic villain of Crosscut, who at first seems to be picking off old high school classmates prior to their reunion due to some adolescent grudge. But because Meg is such an inventive and talented writer, it turns out to be much, much worse—as suggested by the terrifying line he uses with his victims: “Tell me when it hurts.”

King Joffrey from Game of Thrones

Seriously. If you didn’t want to murder King Joffrey every time he appeared on screen—if the sight of his perpetually snarling face didn’t make you wish for a dragon’s fire-breathing powers just so you could turn the murderous, sadistic brat to ash—then I doubt your humanity. Alright. Maybe humanity isn’t the right word here. After all, I seriously considered therapy after hearing the words that came roaring out of me when Joffrey finally—spoiler alert!—met his terrible end.

His evil reign went on a little too long for my taste, but it was interesting to watch a show put forward a character that literally every other character on the show had a great reason to kill. Joffrey’s individual acts—which included shooting arrows through a prostitute he’d tied to his bedpost just for the fun of it—weren’t nearly as dread-inducing as the fact that he was king. Watching for several seasons as all of Westeros remained trapped in the grip of a deranged, remorseless, and bloodthirsty child was one of the most terrifying developments on a show that never scrimps on fear.

Christopher Rice is the recipient of the Lambda Literary Award and is the New York Times bestselling author of A Density of Souls and the Bram Stoker Award finalists The Heavens Rise and The Vines. He is the head writer and an executive producer of The Vampire Chronicles, a television show based on the bestselling novels by his mother, Anne Rice. Together they penned Ramses the Damned: The Passion of Cleopatra. With his best friend, New York Times bestselling novelist Eric Shaw Quinn, Christopher hosts the YouTube channel The Dinner Party Show with Christopher Rice and Eric Shaw Quinn (#TDPS). He lives in West Hollywood, California. Visit him at www.christopherricebooks.com.