This week, the highly anticipated new novel from John Hart highlights an incredible week of books! See what else we're reading:

The Hush by John Hart

It’s been ten years since the events that changed Johnny Merrimon’s life and rocked his hometown to the core. Since then, Johnny has fought to maintain his privacy, but books have been written of his exploits; the fascination remains. Living alone on six thousand acres of once-sacred land, Johnny’s only connection to normal life is his old friend, Jack. They’re not boys anymore, but the bonds remain. What they shared. What they lost.

But Jack sees danger in the wild places Johnny calls home; he senses darkness and hunger, an intractable intent. Johnny will discuss none of it, but there are the things he knows, the things he can do. A lesser friend might accept such abilities as a gift, but Jack has felt what moves in the swamp: the cold of it, the unspeakable fear.

Read an excerpt from The Hush, check out an exclusive Q&A with John Hart, take a visual tour with GIFnotes, and then read Jenny Maloney's review!

Mike Hodge—veteran of the Great War, big shot of the Chicago Tribune, medium fry—probably shouldn’t have fallen in love with Annie Walsh. Then, again, maybe the man who killed Annie Walsh have known better than to trifle with Mike Hodge.

In Chicago, David Mamet has created a bracing, kaleidoscopic page-turner that roars through the Windy City’s underground on its way to a thunderclap of a conclusion. Here is not only his first novel in more than two decades, but the book he has been building to for his whole career. Mixing some of his most brilliant fictional creations with actual figures of the era, suffused with trademark “Mamet Speak,” richness of voice, pace, and brio, and exploring—as no other writer can—questions of honor, deceit, revenge, and devotion, Chicago is that rarest of literary creations: a book that combines spectacular elegance of craft with a kinetic wallop as fierce as the February wind gusting off Lake Michigan.

The Neighborhood by Mario Vargas Llosa

One day Enrique, a high-profile businessman, receives a visit from Rolando Garro, the editor of a notorious magazine that specializes in salacious exposés. Garro presents Enrique with lewd pictures from an old business trip and demands that he invest in the magazine. Enrique refuses, and the next day the pictures are on the front page. Meanwhile, Enrique’s wife is in the midst of a passionate and secret affair with the wife of Enrique’s lawyer and best friend. When Garro shows up murdered, the two couples are thrown into a whirlwind of navigating Peru’s unspoken laws and customs, while the staff of the magazine embark on their greatest exposé yet.

Read an excerpt from The Neighborhood!

A Whisper of Bones by Ellen Hart

Britt Ickles doesn’t remember much from her only visit to her mother’s childhood home when she was a kid, except for playing with her cousin Timmy and the eruption of a sudden family feud. That’s why, when she drops by unannounced after years of silence, she’s shocked when her aunts tell her Timmy never existed, that she must be confusing him with someone else. But Britt can’t shake the feeling that Timmy did exist…and that something horrible has happened to him. Something her aunts want to cover up.

Britt hires Jane Lawless, hoping the private investigator can figure out what really happened to her cousin. When a fire in the family’s garage leads to the discovery of buried bones and one of the aunts dies suddenly and suspiciously, Jane can’t help but be pulled into the case. Do the bones belong to Timmy? Was the aunt’s death an accident, suicide, or homicide? What dark secret has this family been hiding for decades? It all depends on Jane Lawless to unravel.

Read an excerpt from A Whisper of Bones, take a visual tour with GIFnotes, and then check out Doreen Sheridan's review!

Oakland, California, 1983: a city churning with violent crime and racial conflict. Officer Hanson, a Vietnam veteran, has abandoned academia for the life-and-death clarity of police work, a way to live with the demons that followed him home from the war.

But Hanson knows that justice requires more than simply enforcing the penal code. He believes in becoming a part of the community he serves—which is why, unlike most officers, he chooses to live in the same town where he works. This strategy serves him well … to a point. He forges a precarious friendship with Felix Maxwell, the drug king of East Oakland, based on their shared sense of fairness and honor. He falls in love with Libya the moment he sees her, a confident and outspoken black woman. He is befriended by Weegee, a streetwise eleven-year-old who is primed to become a dope dealer.

Every day, every shift, tests a cop's boundaries between the man he wants to be and the officer of the law he's required to be. At last an off-duty shooting forces Hanson to finally face who he is, and which side of the law he belongs on.

Set in the South at the height of the Vietnam War, The Unwilling combines crime, suspense, and searing glimpses into the human mind and soul in New York Times bestselling author John Hart’s singular style. John Hart has long been producing quality literary fiction that has transcended different genres, yet he still is not the household name he…

The 2008 Edgar Awards were not exactly a banner year for diversity, with no nominees being women or writers of color, but it was a year of heavy-hitters nevertheless, with John Hart, Benjamin Black (Christine Falls), Ken Bruen (Priest), Reed Farrel Coleman (Soul Patch), and Michael Chabon (The Yiddish Policemen’s Union) vying for the honor.… 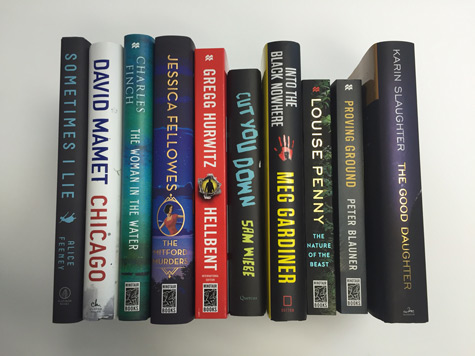 At CrimeHQ, we're dedicated to bringing you the best in crime and mystery. And now, the site you know and love will be getting an upgrade! So for the next week or so, we'll be busy getting everything in order and moving our great content over to our new site. But, in the meantime, we…