April 21, 2021
What can a writer do to tackle a subject matter as complex as mental illness with grace, respect, and dignity? D. J. Palmer, author of The Perfect Daughter, lays out 5 rules he followed in his process that helped him avoid the pitfalls of misrepresentation.

PLUS: Enter for your chance to win a copy of The Perfect Daughter below!

When a writer gets the details wrong, readers let us know. Why? Readers bring their own experiences and knowledge to a book, and they expect authors to have done their homework when writing about subjects they know and may have lived. I remember my father, bestselling medical suspense writer Michael Palmer, recounting the mountains of angry letters he received over a character who had improbably changed a magazine clip on a revolver. I grimace to imagine his flooded inbox had he written that book in the era of email!

To create a sense of authenticity, authors must take great care to get the facts and details correct. Failure to do so may pull readers from the story, or worse, make them put down the book for good. Readers react to author errors with varying degrees of ire, but no subject matter seems quite as fraught as writing about mental illness.

According to the National Institute of Mental Health, nearly one in five U.S. adults lives with a mental illness—that’s 51.9 million people in 2019. While that accounts for twenty percent of the population, each afflicted person is also attached to family and friends. With that in mind, it is no great stretch to claim that mental illness touches the lives of nearly every American. Worldwide estimates put the number of individuals suffering from some form of mental health issue at close to one billion. Writing a mental health storyline therefore requires significant care on the part of the author.  Much as physicians take an oath to “first, do no harm,” and Buddhists aspire to ease the suffering of all living things, a writer must depict real experiences in a way that avoids perpetuating harmful myths and falsehoods.

For the most part, people want to have their stories told, but they also expect the telling to adhere to their personal version of the truth. When writing about mental illness, it is incumbent on the author to take great care to portray symptoms, conditions, and treatments as accurately as possible. Should a writer take certain liberties with mental illness for the sake of the story, that act can be viewed as exploitation. Misrepresentation of a mental health struggle not only upsets and invalidates readers for whom that subject is personal but may also perpetuate stereotypes of mental illness that unfortunately have taken root in society.

Thankfully, the power of story to enhance our collective understanding, increase empathy, and broaden perspectives outweighs the risk of falling short in narrative verisimilitude. For this reason, we must not shy away from writing about mental health. Fiction has the unique capacity to make someone in the throes of a struggle, or their loved ones, feel less alone and better understood, which can be healing in its own right.

So what can a writer do to tackle a subject matter as complex as mental illness with grace, respect, and dignity? I asked myself this question before I set off to write The Perfect Daughter, a story about a teen girl suffering from dissociative identity disorder (DID), formally known as multiple personality disorder, who stands accused of a heinous crime.

A recent New York Times article by Jane Brody cites well-known works such as “Sybil” and “The Three Faces of Eve,” as examples of DID portrayed in popular culture, and notes correctly how a surprising one percent of the population is affected. The condition is both underdiagnosed and often misdiagnosed as depression or anxiety disorder. Psychiatrists have moved away from thinking of the disorder as a personality split. DID is now believed to be a neurological coping mechanism employed in cases of childhood trauma. In these extreme situations, the mind splinters into multiple personas at a time when the personality is in its formative stage and, therefore, highly vulnerable. In the disorder, each new persona takes on a specific function and, taken in total, serves as a mechanism to bury pain and trauma deep into the subconscious. As a result, there are not multiple personalities, but rather one personality fragmented into many. Treatment may never rid a person of alternates, but it can help a patient learn how to coexist with them in one neurobiological ecosystem, leading to a more productive and fulfilling life.

Writing about such a nuanced and misunderstood condition as DID without inflaming tempers or perpetuating myths requires great care and forethought. I followed some rules in my process that I believe helped me avoid the pitfalls of misrepresentation.

1. Shape the story around the condition, not the other way around.

There were moments when my story might have benefited from DID presenting in a particular fashion that wasn’t common or true to the condition. I knew taking such liberties might have helped the plot, but it would also have inflamed tempers and possibly perpetuated misconceptions. Instead of bending the condition to my story, I conformed my story to the facts.

Google any mental health disorder and you’ll find an array of associated falsehoods surrounding that condition. Knowing the myths is a prerequisite to busting them, so do your research well. However, efforts to elucidate your findings may have you writing prose that is didactic and preachy, which won’t serve your story or reader. Fiction books should entertain and inform, so it’s essential that correcting misconceptions be woven organically into the narrative. There are several myths about DID I tried to dispel in The Perfect Daughter. For instance, many people are under the impression that the condition is rare, when one percent of the population has DID in some form, putting its prevalence on par with schizophrenia.

Another DID fallacy is that those with the condition are more prone to violence when, in reality, they are no more likely than someone without DID to commit a violent act. I intentionally gave characters this misinformation to organically correct false notions more seamlessly and without jarring exposition, thus simultaneously informing my characters and readers.

If you are using mental illness as a “gotcha”—a way to explain a big reveal, or turn a character into an unreliable narrator, expect frustration from readers who will see the move as capitalizing on their suffering. And by all means, please don’t invent a symptom just because it’s better for your story. By making a condition the focal point of a novel rather than part of the reveal, you reduce the risk of being offensive while maximizing the opportunity to enhance empathy and bring understanding of a specific disorder or mental health issue to your characters and readers.

Don’t rely on the Internet as your primary source for information about any mental illness. To accurately portray DID in The Perfect Daughter, I consulted with a psychiatrist about the clinical aspects of the disorder, medication, treatments, and therapies. It’s easy to get the facts wrong, especially when the Internet offers so many conflicting viewpoints. To that end, I prefer to find primary source material, including videos, transcripts, and blogs, to augment what I discover in journal articles and research studies. I aim to develop a clear picture of the ailment and how it directly impacts patients and their caregivers.

This “golden rule” should apply to your fictional characters as their experiences on the page reflect others’ real-life struggles. Make every effort to portray your characters fairly and with compassion for their suffering. Mental illness isn’t a choice, and it’s not easily overcome. When you write characters burdened with a mental health crisis, keep in mind that a reader who has the condition you depict, or knows someone with it, may likely pick up your book. You want them to thank you for taking the time and effort to portray their struggle accurately.

Writing about mental illness or any health-related condition exposes the author to a host of potential failures. But writing about issues like mental illness also provides an opportunity to help people understand a diagnosis that affects millions and to reduce the stigma for those who live with the condition. And remember, by adhering to these five simple rules, you can reduce the chances of receiving an onslaught of angry emails. 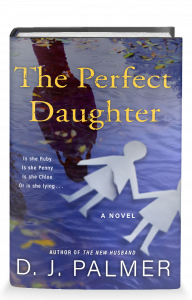 The Perfect Daughter Comment Sweepstakes: NO PURCHASE NECESSARY TO ENTER OR WIN.  A purchase does not improve your chances of winning.  Sweepstakes open to legal residents of 50 United States, D.C., and Canada (excluding Quebec), who are 18 years or older as of the date of entry.  To enter, complete the “Post a Comment” entry at  https://www.criminalelement.com/writing-about-mental-health-shape-the-story-around-the-condition/ beginning at 2:00 p.m. Eastern Time (ET) April 21, 2021. Sweepstakes ends at 1:59 p.m. ET April 30, 2021. Void outside the United States and Canada and where prohibited by law. Please see full details and official rules here. Sponsor: Macmillan, 120 Broadway, New York, NY 10271.